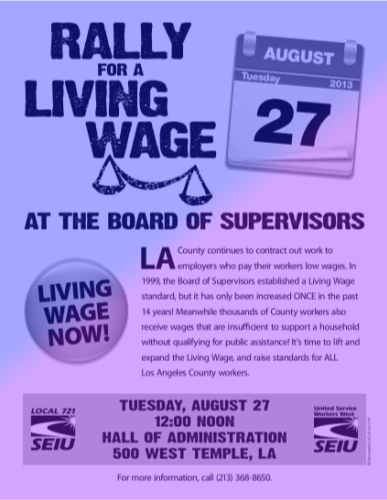 In 1999 the Los Angeles County Board of Supervisors approved a Living Wage Ordinance applicable to private businesses that contract with the county to provide certain services, including landscaping, janitorial and security. The reason for the ordinance was simple: The state’s minimum wage at the time — $5.75 per hour—was insufficient and the failure of some county contractors to pay their workers living wages was placing financial burdens on L.A. County by causing these employees to use social and health services provided by the county.

To make matters worse, the cost of living in the Los Angeles metropolitan area has risen substantially since 2004. Updated to account for inflation, that $12.90-per-hour figure would now be $15.96 per hour.  That is why tomorrow, Tuesday, August 27, a rally will be held to urge the supes to take a new look at the county’s living wage  and to strongly encourage them to raise it to a more reasonable level.

What: Rally to increase the county’s living wage.

Related Topics:L.A. County Board of SupervisorsL.A. County Living Wage
Up Next