About 80 activists representing feminists, gays and lesbians, workers and Hollywood celebrities rallied in front of the iconic Beverly Hills Hotel Monday afternoon to protest the Sultan of Brunei’s introduction of a brutal version of Sharia law.

Hassanal Bolkiah, who is worth an estimated $20 billion and has been the ruler of Brunei for the last half century, owns the hotel along with the Hotel Bel-Air and other luxury properties around the globe.

The new law technically went into effect last week and will be fully phased in by 2015. It allows for the public flogging of women who have abortions, the stoning to death of gay men and lesbians, and the jailing of women who become pregnant outside of marriage. Thieves could have their right hands and left feet amputated.

Monday’s protest took place in Will Rogers Memorial Park, across Sunset Boulevard from the Beverly Hills Hotel. It was organized by the Feminist Majority Foundation (FMF) and featured former late-night talk show host Jay Leno; FMF president Eleanor Smeal; labor leader Dolores Huerta; Katherine Spillar, executive editor Ms. magazine; and Andreas Meyer, President of Equality California. Organizers asked participants to sign a petition calling on the government of Brunei to rescind the new law and to ask the United Nations to take action. They were also encouraged to use the hashtag #StopTheSultan on Twitter. 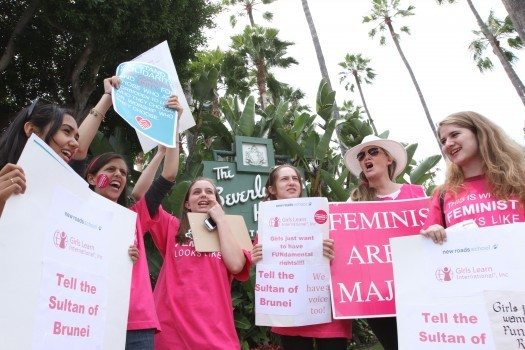 One by one speakers called for a boycott of the hotel and for the United States State Department to take action against the tiny but petroleum-rich Southeast Asian nation. The pressure appears to be working with some individuals and progressive organizations.

Such celebrities as Ellen DeGeneres and Virgin Airlines founder Richard Branson have vowed to boycott the Bolkiah-owned Dorchester Collection of hotels. In addition, many prominent entertainment organizations and advocacy groups have been pulling their planned events from the Beverly Hills Hotel and re-locating to other venues.

“Real people will be stoned to death, real women will be flogged for exercising their human rights. We are taking a stand,” Smeal told the crowd, many of whose members held signs reading, “Feminists Are the Majority.”

Automobile aficionado Jay Leno, who along with his wife Mavis, is the co-chair for the FMF’s annual Global Women’s Rights Awards event that was moved from the Beverly Hills Hotel to the Hammer Museum in Westwood last night, joked that he would probably not get invited to see Bolkiah’s enormous car collection.

But then Leno became serious. He brought up Boko Haram, the Islamic extremist group in Nigeria that recently kidnapped more than 200 schoolgirls and was planning to sell them as sex slaves.

“What year is this?” asked Leno, who was flanked by his wife, a Feminist Majority board member. “What is this, 1814? Come on people, it’s 2014. Women are being kidnapped. Evil flourishes when good people do nothing.”

He said FMF’s intent is to draw attention to the atrocities being waged and that are about to be waged, in hopes that people will think twice about holding any of their events at the properties owned by the sultan.

UNITE HERE Local 11, a union representing 20,000 hospitality workers in Los Angeles and Orange County, started a “Dump Beverly Hills Hotel” boycott against Bolkiah and created a www.dumpbhh.org website that keeps tabs on which of his properties to boycott.

Ada Briceno, secretary-treasurer of UNITE HERE, said that for decades workers at the Beverly Hills’ sister hotel, the Hotel Bel-Air, had a living wage, family health care and a voice on the job because they were represented by a labor union. But then the hotel was bought by Bolkiah and closed in 2009 for renovations.

Instead of bringing the workers and the union back after the hotel reopened, “these owners of the Hotel Bel-Air chose to do with the workers what they did what the furniture – they threw them out,” Briceno said.

In a similar vein, Huerta urged people to get involved in the campaign and reminded them that Bolkiah is against worker’s rights and that he’s “a bad guy all around.”

Tonight at 7 p.m., the Beverly Hills City Council will consider a motion that will ask the government  of  Brunei  to  divest  itself  of the  Beverly  Hills Hotel.

Thanking Those Who Serve Us