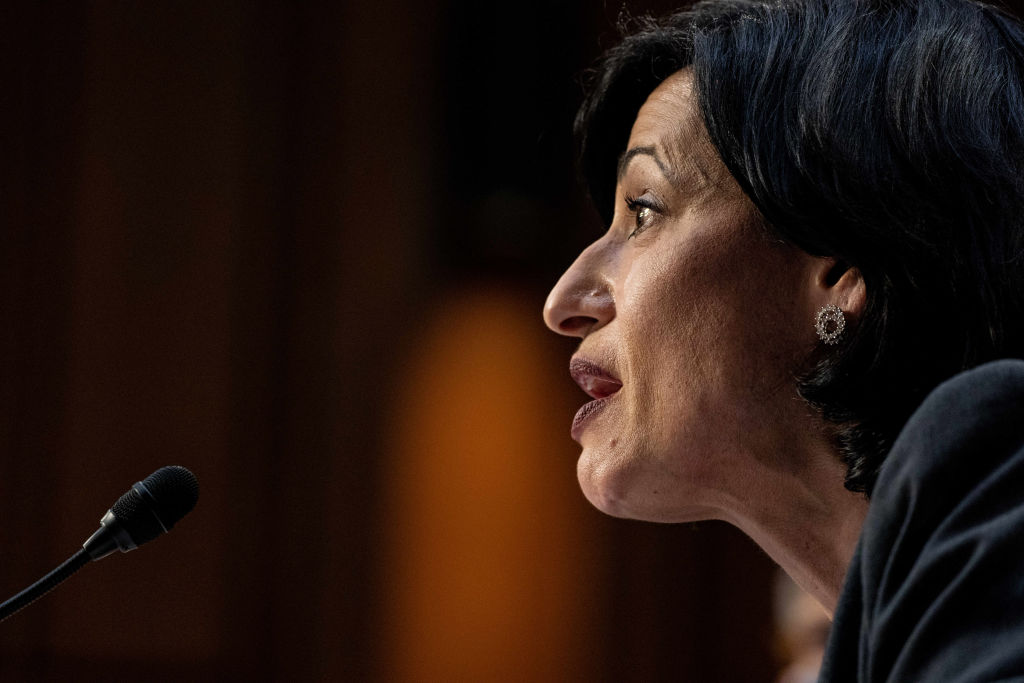 By almost any measure of a federal official’s job description or sphere of influence, the words of the director of the Centers for Disease Control and Prevention were extraordinary. Wading into a conversation that has been boiling for decades, Dr. Rochelle Walensky suggested last week that the CDC will be standing at the intersection of race and health for the foreseeable future.

“What we know is this: Racism is a serious public health threat that directly affects the well-being of millions of Americans,” Walensky wrote. “As a result, it affects the health of our entire nation.”

The CDC’s latest morbidity and mortality report noted that the percentage of COVID-19 hospitalizations
was highest for Hispanic or Latino patients.

Walensky’s comments echo years of research, and they neatly sum up almost everything we’ve been reminded of during the past year’s COVID-19 crisis. As the virus ripped through low-income neighborhoods and communities of color at disproportionate levels, those truths were again brought out on display: Living conditions, race, ethnicity and economic inequity all place heavy thumbs on the scale of health outcomes.

On Monday, the CDC’s latest morbidity and mortality weekly report focused on racial and ethnic disparities in both hospital and emergency room COVID-19 visits, with the agency noting that the percentage of hospitalizations was highest for Hispanic or Latino patients among each of the U.S.’s four census regions. Walensky said the results “underscore the need to address health inequities in our country, including in our vaccination efforts.”

A University of California, Los Angeles, report released last month, meanwhile, found that Latinos in California were two to eight times more likely to die of COVID than non-Hispanic white people during the six months from late July 2020 to late January 2021. (The rates varied by age group.) Latinos account for 55.6% of COVID cases in California and 46.6% of its pandemic deaths, despite making up only 38.9% of its population, according to state data. The virus death rate for Latinos is 22% higher than the state average, and it’s 7% higher for Black residents. Communities with median incomes below $40,000 have a 37% higher COVID case rate than the state average.

Health experts say the simplest explanations for these results are also the correct ones. Many families in communities of color are in lower income brackets. They may live in crowded conditions or multigenerational situations, and they may carry existing comorbidities (like high blood pressure or heart disease) that make them more vulnerable to COVID. These communities also generally have the poorest access to health services and, to Walensky’s larger point, limited ability to elevate their lives above low-wage status.

“Racism is not just the discrimination against one group based on the color of their skin or their race or ethnicity, but the structural barriers that impact racial and ethnic groups differently to influence where a person lives, where they work, where their children play, and where they worship and gather in community,” the CDC director added. “These social determinants of health have lifelong negative effects on the mental and physical health of individuals in communities of color.”

Walensky, with the support of the Biden administration, is pledging CDC action “to address racism as a fundamental driver of racial and ethnic health inequities in the United States.” But from a national government perspective, what does that look like? Here’s a glance at some of the salient factors.

Equitable vaccine distribution. At Monday’s White House briefing, Walensky said the CDC kicked in $3 billion last month to both expand vaccine distribution and make it more equitable. The agency also made more than $300 million in funding available “to strengthen the work of community health workers nationwide.” As we’ve noted, the failure to more fully integrate the community clinic system into the vaccination effort has been a drastic mistake, especially in California, where those clinics’ staffs serve hard-to-reach and low-income areas and often personally know the patients with whom they interact.

The CDC previously made available $2.25 billion, Walensky said, for “testing efforts” in high-risk communities. She said the agency will continue to support and expand that work, with the goal of ultimately building bridges in communities that have been underserved in the past, although no immediate details were offered.

Promotion of public discourse. The CDC last week debuted a website, Racism and Health. It’s essentially a landing spot for all of the agency’s work that is directed toward raising awareness of the role racism plays in health outcomes, and it includes links to the latest science and research on the topic, along with commentary and perspective from outside experts and an accounting of the agency’s own efforts to address the issues.

National legislation. In January, U.S. Sen. Elizabeth Warren (D-Mass.) and U.S. Reps. Ayanna Pressley (D-Mass.) and Barbara Lee (D-Calif.) reintroduced a bicameral bill that would expand government research into the impact of COVID-19 by race. As of January, only 17 states were reporting their vaccination data by race, according to the Kaiser Family Foundation.

The Anti-Racism in Public Health Act of 2021 would also establish two programs within the CDC, including a National Center for Anti-Racism “to declare racism as the public health crisis that it is,” according to a news release from Warren’s office. A Law Enforcement Violence Prevention Program, meanwhile, would be established within the agency’s National Center for Injury Prevention and Control, and would “take a public health approach to combating police brutality and violence.”

Medical and community activism. The CDC certainly isn’t the first to declare racism as detrimental to health outcomes, not even during the time of the pandemic. The American Medical Association, the nation’s largest group of doctors, approved a policy in November that “recognizes racism as a public health threat and commits to actively work on dismantling racist policies and practices across all of health care.”

Meanwhile, data collected by the American Public Health Association shows that nearly 200 local and state leaders and governmental bodies across the country have made similar declarations. Among the 28 listed in California are the Los Angeles City Council and the San Francisco Health Commission. The APHA called the declarations “an important first step in the movement to advance racial equity and justice, and [they] must be followed by allocation of resources and strategic action.” That is precisely where Walensky and the CDC want to go, and it will take much more than a strongly worded statement to get there.

Health Experts: ‘A Race Between the Variants and the Vaccine’ Amid a Surge