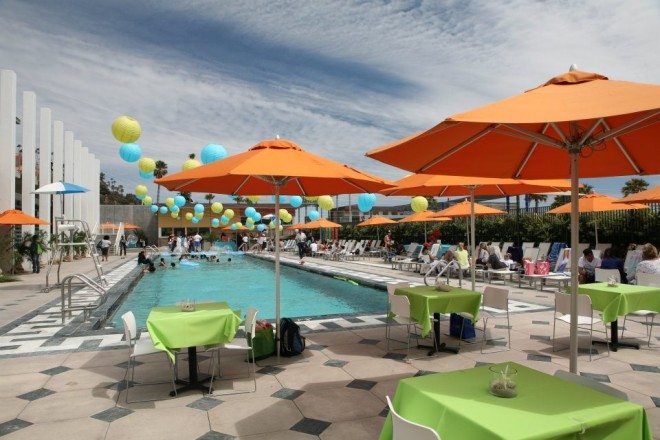 Open to the public: The Annenberg Community Beach House

I spent last Saturday morning at the five-acre Annenberg Community Beach House complex which, as far as I know, is the only publicly accessible beach facility on the entire coast of our great state.  About 200 of us were gathered to honor the 31-year tenure of Barbara Stinchfield, a Santa Monica city staffer who led the effort to finance,  design, build and manage the newly opened beach facility for community use.

With a public pool, playground, shaded seating areas, outdoor fountain, public meeting rooms and an indoor-outdoor reception room, the complex, located on the “Gold Coast” adjacent to high-end beach homes, offers ordinary people the beauty of the California beachfront in a tastefully designed building – just what the wealthy can afford to buy in a private beach club.

The “private sector” would have had no incentive to build a public facility like this since it generates no profit and its primary mission is service to the public.  In fact, wealthy homeowners adjacent to the property tried to prevent the project from going forward – fearing the impact “the public” would have in lowering their property values and endangering their children.

The retiring staffer – a former co-worker of mine and a good friend – has headed up other important public-benefit efforts such as the Santa Monica beachfront improvement project that upgraded the pedestrian promenade and beach bike path used by millions of residents and visitors; the funding of nonprofit agencies in Santa Monica that serve the elderly, homeless, youth and mentally ill; and numerous open space and park initiatives during her three decades of service.

Those of us present were celebrating not just her dedication and leadership but the roles that each of us had played as participants in these great projects as elected officials, engaged citizens, members of city commissions,  city employees or simply as tax payers.

These days it’s become popular to malign public employees for living off the public dime and representing “bloated government.”  Yet what those attacks are really aimed at are the public benefits that our local governments provide to our residents, at reduced or no cost.

Some have suggested that the attacks on public spending cloak a desire by for-profit companies to get into the “business” of managing open space, schools, public facilities and government itself — with an eye toward the profits that could be eked out of such an arrangement.  Low-wage workers would replace tenured public employees who have family health coverage and pension benefits for their old age.  How would that enhance our communities and our nation?  And where would people like Barbara then be able to build a career dedicated to serving the public?

The Economic Café: A Talk With USC's Manuel Pastor