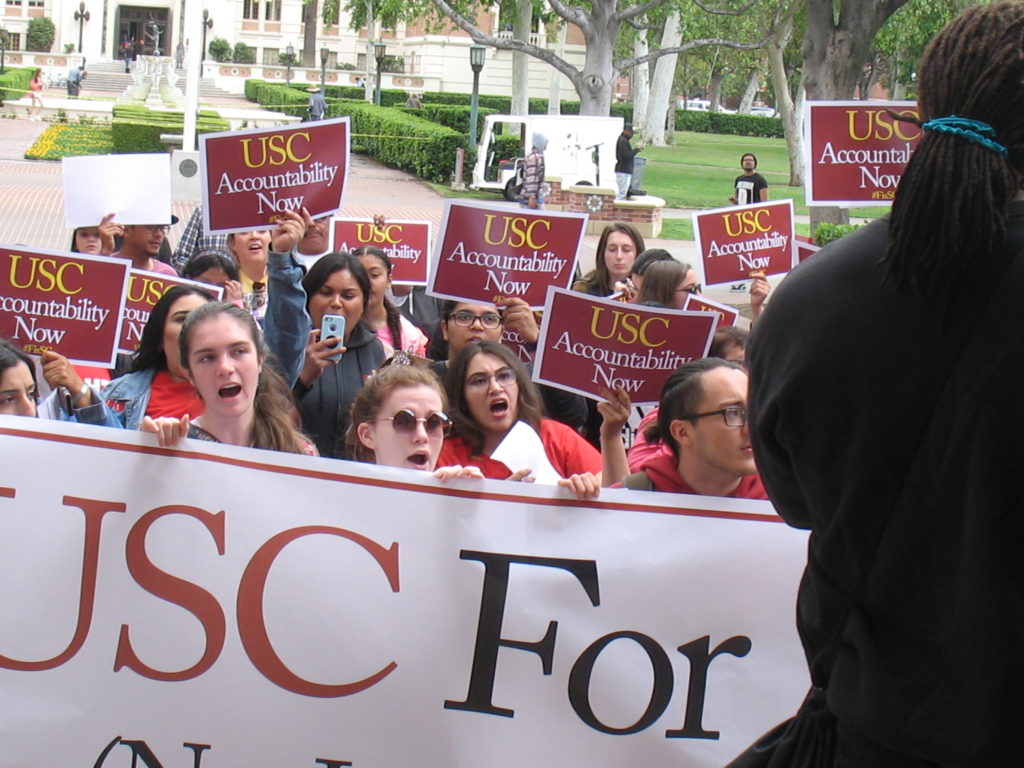 All photos by Lovell Estell III

The University of Southern California is no stranger to controversy, and is currently making headlines for its starring role in an alleged nationwide college admissions scandal. Many believe that this and other recent incidents are not isolated events, but part of a much larger problem rooted in what critics describe as the university’s culture of arrogance, greed and lack of accountability. Hoping to raise public awareness about these issues, a coalition of community groups, local residents and student activists, organized by Service Employees International Union Local 721, has established an overnight encampment of nine tents on Jefferson Blvd. outside the main campus entrance on Hoover St. (Disclosure: The SEIU State Council is a financial supporter of this website.) 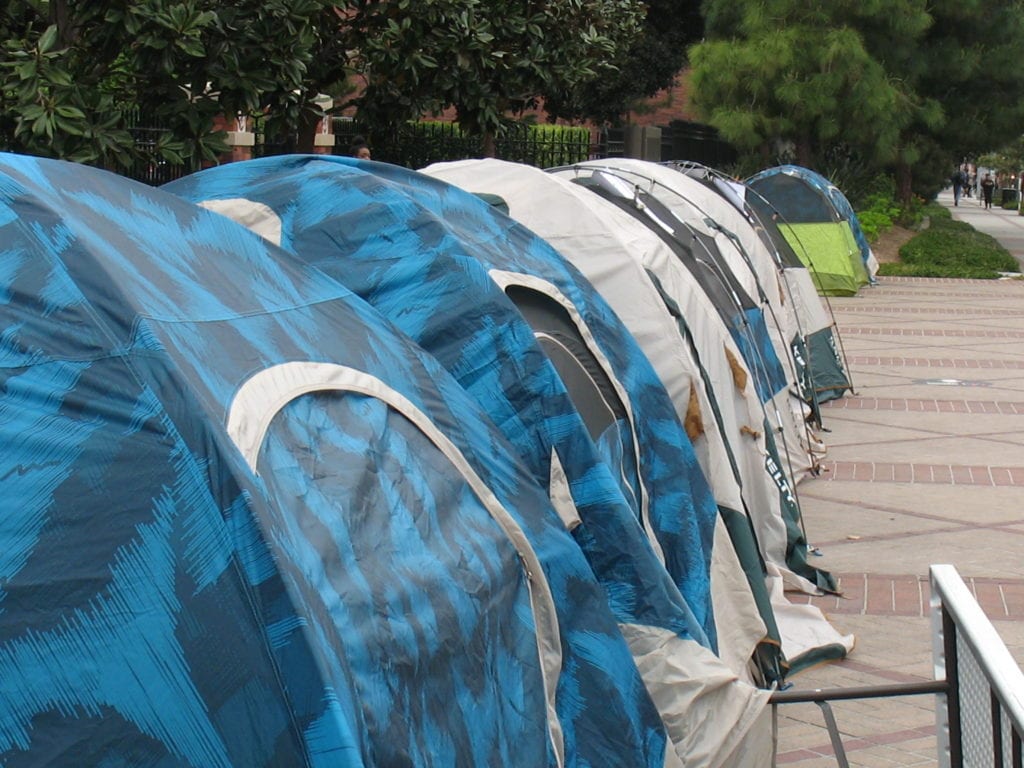 The group, USC Forward, began its action April 13 during the Los Angeles Times Festival of Books, and says it will close it down by week’s end, although one organizer told Capital & Main it might be extended. USC Forward’s announced goal is to force the university to grant greater access to low-income students, affordable housing for those who have been impacted by the school’s ongoing development and recognition of Local 721, which has been seeking to represent faculty members.

On Tuesday afternoon a crowd of about 60 people, mostly black and Latino,  heard some dismal stories told by people who have been displaced from their homes by what they say is the university’s decades-long program of gentrification, which has transformed the area into a mini Westwood Village. Streets that were once home to a large community of African-American and Latino families are now lined with university-owned student housing complexes, which sometimes feature retail outlets on their ground floors.

“This is what rich people have always done,” said Kameron Hurt, a USC senior majoring in International Relations. “It’s essentially a colonial-style set-up.” And the building continues. According to a flier that USC Forward circulated, last year 80 residents on Exposition Boulevard were evicted and their homes turned into student housing. USC Forward charges that university officials don’t seem to care. “USC has a long history of displacing black and brown people from their homes in the south L.A. area,” said SEIU Local 721 spokesperson Coral Itzcalli.

Speaking in a voice edged with frustration, Itzcalli told Capital & Main that a part of “the faculty voted to unionize over a year ago, and they voted to join our local, but USC has refused to recognize the union . . . and has refused to sit across the table with them to figure out how to compensate them for what they do. But the union is here.” Earlier, a foreign student from Paris named Elsa spoke about hardships she said she had endured with the university administration during last winter’s federal government shutdown. “The only way things are going to start to improve here,” she said, “is through constructive dialogue.”

Around noon the demonstrators marched onto campus to the front of the Bovard Administration Building, chanting and waving placards, all under the watchful eye of campus police. The goal was to deliver a list of demands to acting university president Wanda Austin,  who was not in her office. A few more speeches followed, after which the crowd walked away to chants of “We’ll be back!”

When asked for comment, Austin’s office released the following statement: “The letter was received by a representative of the president’s office.  The University’s singular focus continues to be the students, patients, and community we serve. As noted on the change.usc.edu web site, many of the ideas and suggestions made in the letter are already well underway.”

The afternoon ended with a lunch provided by the group in a small park across the street. It is too early to say whether USC Forward’s action will affect some positive changes, but as Pastor Cue, one of the demonstration’s organizers, told Capital & Main, “We are going to keep trying.” 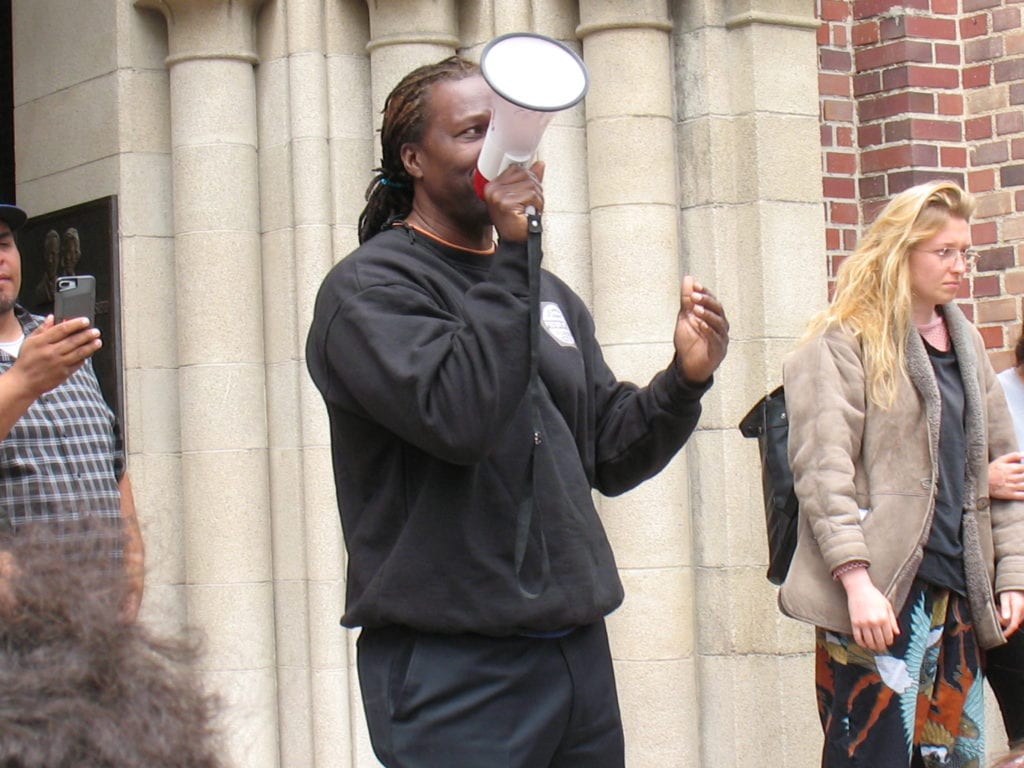