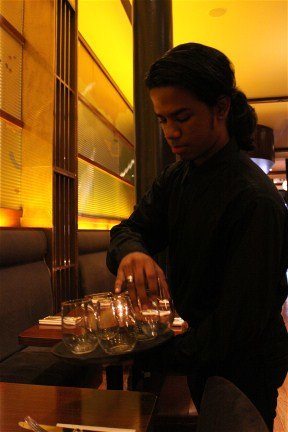 Capital & Main has confirmed that a proposed California law could upend existing minimum wage laws across the state, potentially rolling back wage increases for tens of thousands of people. If passed, the legislation could invalidate wage hikes approved by voters in some of the state’s largest cities, including San Francisco and Oakland. (See original story here.)

Assembly Bill 669 is backed by the California Restaurant Association (CRA) and is being championed by Assemblyman Tom Daly, a Democrat from the Orange County city of Anaheim.

The legislation’s target is tipped workers – under Daly’s proposal, the minimum wage for workers who receive tips would be capped at $9 if their total hourly compensation, meaning base wage and tips, is $15 an hour or more. If, for example, an Oakland waitress earns that city’s current minimum wage of $12.25 an hour, and additionally makes $3 in hourly tips, her pay will be adjusted downard to $9 an hour plus her $3 in tips.

But the legislation would effectively overturn existing local minimum wage laws across California through a preemption clause. The bill would require cities that have enacted minimum wage laws to amend their ordinances, with explicit language stating the laws’ intention to include tipped workers. Otherwise the ordinances would be superseded by the new state statute.

In the case of cities such as San Francisco, Oakland and San Jose that raised the minimum wage through a ballot initiative, the wage hikes would be nullified until another initiative with AB 669’s required language on tipped workers was approved by voters.

“Even if a city council wants to fix this, the lawyers may tell them they can’t – that only a vote of the people can fix it,” said Andy Kahn, a partner at the Bay Area law firm Davis, Cowell & Bowe. “It’s an outrageous interference with the people’s right to initiative. The burden on localities to have to go back to the ballot is enormous.”

The burden on workers could be equally onerous. “All of a sudden workers’ wages could be cut for as long as it takes for there to be an effective new ordinance – and then the restaurant industry could referendize the [new] ordinance, delaying it even further,” said Kahn.

Christine Owens, executive director of the National Employment Law Project (NELP), believes that Daly’s bill poses a threat not just to wage increases passed by California cities but in municipalities around the U.S.

“This legislation could undo wage hikes approved by voters in any California locality, including those cities that passed increases last year, and would set a dangerous and damaging precedent for local efforts to raise wages and end tip credits across the country,” Owens told Capital & Main.

“Charter cities such as San Francisco and Oakland can establish minimum wages higher than the state minimum wage, and the intent of AB 669 is for local governments to continue to have this authority,” said David Miller, Assemblyman Daly’s legislative director, in response to a query.  “Discussions are under way and we are considering amendments in order to address this concern and ensure that local governments would not need to amend their laws.”

Daly was elected to the California Assembly in 2012, and has already sponsored eight bills that have been signed into law by Governor Jerry Brown. The former mayor of Anaheim has previously come under fire for siding with Republicans on key legislation, such as a bill that would have made it harder for large companies to deny health care coverage to employees. Daly was one of eight Democrats who either voted against the proposed law or abstained – which had the same effect of killing the measure.

“It’s déjà vu all over again with the restaurant association,” said NELP’s Owens. “Not only is it trying to escape the obligation every other California employer has to pay their employees the full minimum wage, but now they’re taking a stab at democracy in their sleight-of-hand legislative gimmick to overturn the will of voters in Oakland, Richmond, San Francisco and San Jose, who overwhelmingly passed minimum wage increases fully protecting tipped employees.”

Media Fingerpointing on the Docks