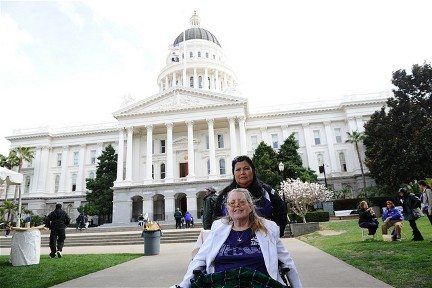 When Governor Jerry Brown unveiled his revised 2015-2016 budget on May 14, hundreds of thousands of In-Home Supportive Services (IHSS) recipients, the low-wage caregivers who serve them, and the health rights activists and labor unions that champion their interests learned there was an apparent seven percent solution to restore previous cuts made to IHSS service hours.

The IHSS program provides care to nearly a half-million, low-income seniors, children and persons with disabilities so they can safely live in their own homes. It is an alternative to institutionalizing the elderly and the disabled, and saves the state hundreds of millions of dollars, while enabling program recipients to receive personalized care from IHSS workers – most often family members – who assist them with hygiene issues, meals, house-cleaning, transportation and medical care.

“As of July 1st 2015, the seven percent reduction in IHSS service hours will be restored and funded by the Managed Care Organization (MCO) tax or another revenue source,” California Department of Social Services (CDSS) Deputy Director of Public Affairs Michael Weston told Capital & Main. “The General Fund would be considered another revenue source,” he added. Under law, the new budget must be approved by June 15.

But many IHSS recipients, employees and their advocates, mindful of past last-minute deals in Sacramento that deprived IHSS workers of overtime pay and paid sick leave benefits,  question if the governor and state legislators will make good on the administration’s promise to restore the seven percent cut in IHSS hours.

Eight years into their 30-year marriage, Tina, now 66, was diagnosed with multiple sclerosis and, later, with spinal stenosis. The MS has caused pain, spasms and partial paralysis to her right hand and arm, and the stenosis damaged her spinal cord, leaving her a paraplegic, Tina and Louis told Capital & Main. For the past 15 years she has been confined to a motorized wheel chair.

“I am happy to be alive and living as normal a life as I can,” she said. Considered fully disabled, Tina credited her emotional stability to her relationships with God and her husband, a former machinist and a pastor for 30 years, who has been an IHSS worker since 2000.

Louis, 60, said caring for Tina is a 24-hour, seven-day-a-week job that he does because he loves his wife. Both of them said the battle against Tina’s health problems has brought them closer together as a couple.

And the caretaking work is intimate. Louis has to lift Tina in and out of her chair for bed and baths, for which he has to help. He also assists her with her toilet needs, helps her exercise and even does her hair.

“At night, I have to turn her in bed so she doesn’t develop skin ulcers, which would not only be painful and dangerous, but very expensive to treat medically,” Louis said.

Despite Tina’s total disability, Louis and Tina said they only qualified for 209 hours out of a maximum 288, at a pay rate of just $9.65 per hour.

“I don’t understand why that is,” Tina said. “My husband needs as much support as he can get.”

Louis had to quit outside work to care for his ailing wife. The seven percent cut in service hours, he said, amounted to a loss of about $135 a month, which Louis said was “huge” for them.

“With those hours restored, we could pay another bill,” he said. “We could hire someone to be with Tina in the day, so I could get some uninterrupted sleep.”

And he has something to say to the governor and the state legislature.

“I understand the [budget] priorities are to the surplus, the schools and the rainy day fund,” Louis said. “The rainy day fund has to be restored, but families like ours are in a storm. It’s not a rainy day for us.”

Della Lundell of Merced echoed these sentiments. Lundell has been an IHSS worker since 2009 and is the primary caretaker for her totally dependent 24-year-old son Steven, who was born with a heart defect, lung disease and has Down syndrome.

Lundell said she has outside work opportunities that could reduce the financial stress on her family, but can only occasionally work one day a week. That’s because IHSS pay is so low, she can’t afford to pay someone else to take care of Steven for more than that.

The financial predicament facing the James’ family, along with Lundell and hundreds of thousands of other IHSS workers, is something Lundell believes Governor Brown doesn’t appreciate, despite his Catholic heritage, with its emphasis on serving the poor.

“I started to write the governor a letter to try and explain the situation to him but it’s hard for me to say what I want to say to reach him emotionally,” she said. “After all, he doesn’t need extra income. He has money. He has health benefits and a healthy retirement income. How could he understand what all of us [IHSS families] are going through?”

The seven percent cut in IHSS hours was instituted two years ago in the wake of a court battle that successfully stopped the implementation of a draconian 20 percent chop in IHSS funding instituted by the Arnold Schwarzenegger administration. As part of the court settlement with the Brown administration, an eight percent cut, reduced to seven percent one year later, is scheduled to run through at least June 30, 2015.

Restoration of the seven percent cut will cost the state an estimated $483.1 million, according to current budget estimates. The IHSS program is overseen by Michael Weston’s agency, CDSS, which would implement the increase.

By all accounts, the seven percent restoration is tied to the implementation of a new MCO state tax. California currently has a MCO tax that is not set to sunset until July 1, 2016.

On May 14, just hours after Brown presented his revised budget, Diana Dooley, California’s secretary of the Department of Health and Human Services (CDHHS) held a conference call with hundreds of stakeholders. During that call, Dooley was even more definitive about the restoration of the seven percent, according to several participants who spoke to Capital & Main.

“What I heard her say was [restoration] was going forward, and [was] not contingent on the MCO tax,” Deborah Doctor, a legislative advocate for Disability Rights California, a statewide advocacy group, told Capital & Main. “I was surprised at what she said. So when it was my turn to ask a question, I asked her again, what will happen on July 1st and she said the seven percent cut in IHSS hours to consumers would be restored.”

Brandi Wolf is the California policy director for the United Longterm Care Workers (ULTCW), which is part of the Service Employees International Union (SEIU).  Wolf acknowledged there was a “verbal statement made by Secretary Dooley” on a public stakeholder call indicating that “the seven percent would be restored on July 1, 2015 even if an MCO tax had not yet been passed.”

However, Wolf told Capital & Main that it is “SEIU’s position the administration should fund the seven percent restoration to the IHSS program out of the General Fund beginning July 1, 2015, whether this new MCO tax proposal passes or not. We believe the Governor should recognize the dignity of the work homecare providers do for our state’s most vulnerable citizens.”

While there was nothing in writing about the IHSS restoration in the revised budget summary, Capital & Main has discovered a supplemental document that addressed the issue. California Department of Social Services – Local Assistance, Executive Summary: 2015 May Revision was published by the CDSS after Brown presented his revised budget. A section labeled “Restoration in Service Hours” states:

The reduction in IHSS service hours under Welfare and Institutions Code section 12301.02 will be restored July 1, 2015 with funding from the Children’s Health and Human Services Special Fund. Revenues include a Managed Care Organization (MCO) provider tax proposed by the DHCS.

“The problem is that until you see the actual budget language – which usually is not publicly released until 24 hours before passage — money allocated is not money restored,” Kristina Bas-Hamilton, the legislative director for United Domestic Workers (UDW), one of the two unions representing IHSS workers, told Capital & Main. (Disclosure: The UDW is a financial supporter of Capital & Main.)

“It’s just not the same,” she emphasized. “And our experience tells us to keep mobilizing and keep the pressure on all the politicians until it’s actually a done deal.”

Of course, any new California tax will need a two-thirds approval from both houses of the state legislature, along with the governor’s signature to go into effect. In January, the administration floated proposed “Trailer Bill Language” for the new MCO tax, which has not yet been introduced in the state legislature.

“It’s been a struggle with the Brown administration to get the cuts restored,” said Doug Moore, executive director of the UDW. “But I expect the IHSS hours to be restored and initially paid for out of the General Fund.”

“I think the governor is cautious about state finances, but he wants the cuts created by the 2008 recession to be restored,” Butler said.

“And if you look at the actions of the subcommittees in both legislative houses, you see there really is a bipartisan understanding of our California values,” she continued. “That we have an obligation to provide for the most vulnerable in our society – children, seniors and the disabled.”[divider]Jim Crogan is a Los Angeles-based writer and investigative reporter.