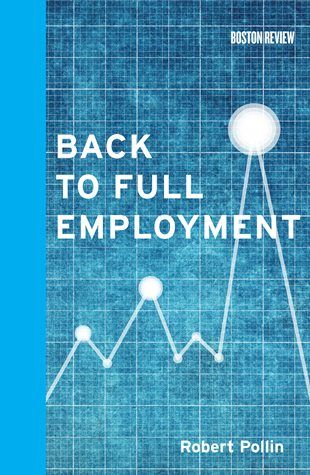 With tens of millions of Americans still out of work, the idea of the U.S. achieving full employment might seem like a pipe dream.

Not so, argues Professor Robert Pollin in his new book, Back to Full Employment. In fact, Pollin (who uses the standard definition of full employment as four percent or less unemployment) suggests that the ongoing jobs crisis offers the perfect opportunity for us to pursue what was once a cornerstone of national economic policy.

Pollin, co-director of the Political Economy Research Institute at University of Massachusetts, Amherst, is no stranger to controversy. Beginning in 1996, when he was asked by living wage proponents in L.A. to conduct a study on how such a policy would affect the city, he has regularly incurred the wrath of free market diehards with his findings that modest mandated wage increases do not wreak havoc on business. In recent years, Pollin – whose previous books include The Living Wage: Building a Fair Economy and Contours of Descent: US Economic Fractures and the Landscape of Global Austerity – has written extensively about building a new green economy that can create good jobs and ward off environmental destruction. Putting his theories to the test, last year he launched his own green business, PEAR (Pollin Energy and Retrofits), with the hope of spurring investment in green energy.

Frying Pan News spoke to Pollin recently about whether full employment has any real prospects in a country where economic policy is dominated by forces that have every reason to oppose it.

Robert Pollin: It’s a centerpiece for restoring decent living standards for middle-class people. The best way to secure a solid middle-class lifestyle is to have jobs that are solid and pay good wages.

FPN: Why do you think that full employment isn’t on the radar screen of most progressives?

RP: The idea was fundamental in the 1960 and into the 1970s, but it was swamped by the neoliberal revolution in economic policy. One of the basic ideas of neoliberalism was that the government is incapable of achieving full employment. So the whole focus of discussion changed and progressives became very defensive and insecure and unclear as to what we should fight for. One of the great things that happened in the ’90s was the living wage movement, which put the idea of decent jobs right back in the middle of the discussion.

FPN: How central is massive government spending to full employment?

RP: We are very, very far from having a decent employment situation. For the short term we cannot abide these massive cutbacks in education, health care, public safety, family support – we will never get to anything close to full employment with these cuts. Over the long term, once we get out of the recession ditch, staying at full employment will require government spending, but the other part is shifting our priorities to the green economy and education and away from fossil fuels and the military.  Spending a given amount of money on the green economy and education will create about three times more jobs per dollar than spending the same amount on maintaining the fossil fuel economy and the military at its current level.

FPN: What would have to change in our politics for a full employment policy to even have a chance?

RP: The Democratic Party combined with organizations like LAANE would have to advance this agenda and put it back in the middle of the economic policy debate. The result would be that a second Obama administration would not tilt so heavily in favor of Wall Street but would be forced to tilt in favor of working people. People complain about the Democrats and Obama, but they are politicians, they will respond to pressure, and we have to get to the point where we can exercise more pressure and move the needle in the right direction.

RP: Reverse the austerity cuts that are taking place at the state and local levels. Beyond that you have to invest in infrastructure and the green economy. The other thing is the Federal Reserve and financial system. The Fed appears to be pursuing a very expansionary policy by setting an interest rate for banks to lend at near-zero. The problem is that banks are hoarding their free money, which now amounts to $1.6 trillion – over 10 percent of GDP. The Fed together with Congress has to pursue policies to push that money into the economy and make it available to small business.

FPN: If you were trying to sell the idea of full employment to top corporate leaders, what would your arguments be?

RP: It’s more important to sell it to groups like LAANE and get a political movement going, because the CEOs won’t listen unless that happens.… As far as the CEOs, big business is run at high levels of productivity, and reasonable  wage increases, in line with productivity growth, are not going to make a big difference to them. What’s more important is that they have good  products, good markets and conditions that promote high productivity. Let’s not be all pollyanna about this – CEOs don’t really care about whether there is full employment, they would just as soon outsource. It’s up to us to say we care about full employment because we will benefit. CEOs won’t be hurt but they will be the last ones on the train.

FPN: Given the extent to which corporate money holds sway over politics, is it a fantasy to think that our elected leaders would pursue a policy that big business will oppose?

RP: Having a full employment economy changes the dynamic in the labor market so that workers’ bargaining power will go up and their wages will rise. In the late 1990s, having close to full employment did push up wages, especially for people at the low end. You have to combine that with a social movement around job quality. That’s where full employment merges with the living wage movement.

FPN: But the living wage movement of the 1990s was a reaction to tens of millions of lousy jobs – it doesn’t seem like having near-full employment guaranteed good jobs.

RP: Living wage did an incredible job of highlighting this central reality. That helped create momentum. Then on top of that you had in  ’97 and ’98, due to the official unemployment rate falling, this strong upward pressure where low-end jobs started to get raises. Part of it was the living wage movement but part of it was that pressure was being exerted on businesses to give raises. That ended very quickly, but we do have some evidence of success – of people thinking about what constitutes  a decent wage along with near-full employment  creating the pressure for workers to bargain up their wages.