All photos by Steve Appleford

Racial and political confrontations continue to rage across the Summer of 2017. Sunday brought over 2,000 counter-demonstrators to the sun-baked boardwalk of Laguna Beach to shout down a modest, Trump-obsessed gathering called “America First! Electric Vigil for the Victims of Illegals and Refugees.” Before it ended with police clearing the streets around 9 p.m., there had been two arrests, some pepper spray, multiple shouting matches and threats, a few songs and continued angst with no end in sight.

The action unfolded barely a week after the alarming white nationalist battle of Charlottesville, Virginia, where young men shouting racist and anti-Semitic slogans marched beneath tiki torches, left and right fought on the streets with clubs and fire, and a 32-year-old nonviolent protester was killed.

Against that backdrop, Laguna Beach was prepared in force for the competing groups gathered on the city’s Main Beach. Police officers and sheriff’s deputies from across Orange County were called in, and a police helicopter circled throughout the day and night.

The America First! rally was a previously scheduled monthly protest on the beach, little noticed in months past. The protest’s announcement on Facebook included a festive group photo that looked more like an invite to an electro dance party than a political event. Pro-Trump and anti-immigration protesters at the Laguna Beach boardwalk.

Only a few dozen protesters turned out, some wearing “Make California Great Again” caps. One protester carried a sign reading: “No more victims. Secure our borders now. How many more lives must be lost?”

Surrounded by media on the sand was activist Johnny Benitez, who organized the America First! protest. Across the street stood a row of small shops, a Starbucks and a Johnny Rockets. Playing at the Laguna Cinemas was Love Rises Up.

As drums pounded from the counter-protesters’ side, Jordan Davis, 25, stood with his German Shepherd on a small grass lot surrounded by police in riot gear. Davis spent time as an active protester for Occupy Wall Street and Black Lives Matter. But last year’s presidential election shifted his political perspective rightward, and he drove south from the Bay Area to join the America First! rally.

As counter protesters shouted “Black lives matter!” nearby, Davis, who is half-African-American, half-Jewish, complained that the events in Virginia had tainted anyone on the right with the stain of David Duke and white supremacy.

“Now they are trying to lump us in with dum-dums,” he said, wearing a T-shirt with a picture of Trump wielding a machine gun. “That’s not fair. We have nothing to do with what happened in Charlottesville. It’s very unfortunate that a few people passed away. It’s very heartbreaking. But at the end of the day, me and Johnny and everyone else, we have to go on with our events.” Nearby was a couple of real housewives of Trumplandia, smiling broadly and dressed in stylish stars and stripes. Earlier, a dark-haired man in a denim vest with a swastika tattooed to his neck made an appearance. Davis said he was asked to leave: “It’s alleged that guy is paid to be here and is a paid to be a fake Nazi to make us all look bad.”

Holding one end of a banner covered with photographs of people allegedly killed by undocumented immigrants was Tyler Denzin, 22, head shaved, an Iron Cross tattooed on his throat. Denzin said the cross and other tattoos were done while serving time in jail and prison. “I don’t consider myself a white supremacist and I’m not affiliated with any hate groups,” said Denzin, who learned of the protest from Facebook.

“This is more conservatives,” he explained. “It doesn’t matter where you’re from. It’s to support to America and Americans. It has nothing to do with the KKK or whatever. I would never march with David Duke. He’s a fucking retard and an asshole.”

Ed Baker, 54, brought his 15-foot flagpole, flying the Stars and Stripes high above the beach and a phalanx of riot police on foot and horseback that kept the opposing factions safely apart. A machinist from Antelope Valley, Baker is a regular at the monthly demonstrations. He supported Benitez’s decision to go ahead, even in the overheated atmosphere of the moment.

“It’s been going on for months and months and months,” Baker said of the America First! protests. “Yes, the timing is really bad, but he’s not going to cancel. We have a problem with illegal aliens killing Americans. Why cancel the event?” 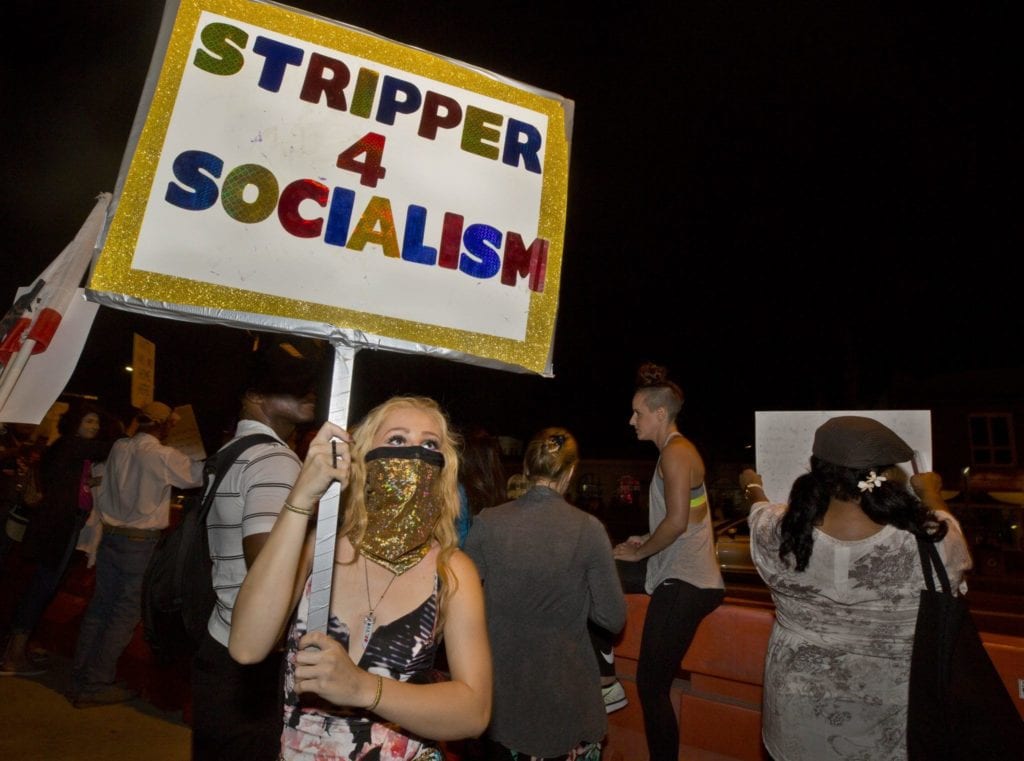 A counter-protester/exotic dancer during the pro-Trump and anti-immigration demonstration.

On the other side of the police line were some protesters taking their first steps into political action. Carrying a sign reading, “Stripper for Socialism,” was an 18-year-old exotic dancer named Piper, who was moved to join the counter-protest after seeing the news from Charlottesville. She had driven here from Anaheim, despite her boyfriend’s objections. It was her first protest. “There’s all kinds of different groups here tonight, and sex work is underappreciated,” said Piper, her stage name. “I’m sure some of my sisters are here tonight.”

There were a few modest scuffles and two arrests. After wading into the counter-protest side, Republican activist R.C. Maxwell, 29, got into a heated exchange with an enraged Richard Losey, 20. Maxwell’s companion pulled out pepper spray, but struck both of them, sending Maxwell and Losey to onsite medics who poured soothing milk into their eyes.

Losey works as a machinist in Lancaster, Ohio, and was on vacation in Laguna Beach when he was told about the Sunday protest. He showed up ready to confront America First! — a plan he described as “just doing the right thing, standing up for the minorities from the racist pieces of shit. What am I going to do, stand there and watch?” R.C. Maxwell, 29, a Republican protester, has milk poured into his eyes after being sprayed with pepper spray.

Soon after recovering from the pepper spray, Losey spotted Maxwell and chased him into the street. Maxwell fell to the pavement, but counter-protesters eased Losey away from the confrontation. Minutes later, police closed down Pacific Coast Highway for the rest of the night.

“Honestly, I enjoy fighting,” Losey said, without apology. “I’m not much of a talker, dude. If I’m going to do something, I’m going to do it.” By 11 a.m. the next morning, he said, he planned to be on a plane back to Ohio. (He was arrested instead the following day.)

Maxwell’s incursion into the counter-protest was no accident. Dressed in a tie and red “Make America Great Again” cap, he came with a camera crew to capture his experience. “It seems like Black Lives Matter is out here getting very aggressive, antagonistic for no reason,” Maxwell said, as he crossed a street. “So as a result of me speaking my mind, and being a conservative Christian Republican, I’ve been attacked, pepper sprayed, assaulted – all on video.” Police with batons push a crowd of counter-protesters near at the end of the Laguna Beach demonstrations.

Bad behavior came from all directions. In the final half-hour of the counter-protest, a line of cops on horseback slowly edged forward to begin moving demonstrators out of the park, a fairly orderly and common police tactic. Then, without warning, a squad of police on foot appeared to aggressively shove people backward with their batons. One cop, with an “H” tattooed on his left knuckle, knocked over a young women for no apparent reason.

Later, there were new chants from counter-protesters: “We won’t leave till they leave!” and “Go home Nazis!” A woman sang a verse of “This Land Is Your Land,” and soon an army of police and sheriff’s deputies marched across the park and through the streets, sweeping away all remnants of the angry protests that for a few hours passed through a quiet beach town on Sunday. A counter-protester is taken into custody after entering the area of a pro-Trump and anti-immigration demonstration at the Laguna Beach boardwalk. Richard Losey, 20, counter-protester, has milk poured into his eyes after being sprayed with pepper spray. He was in Laguna on vacation from Ohio. 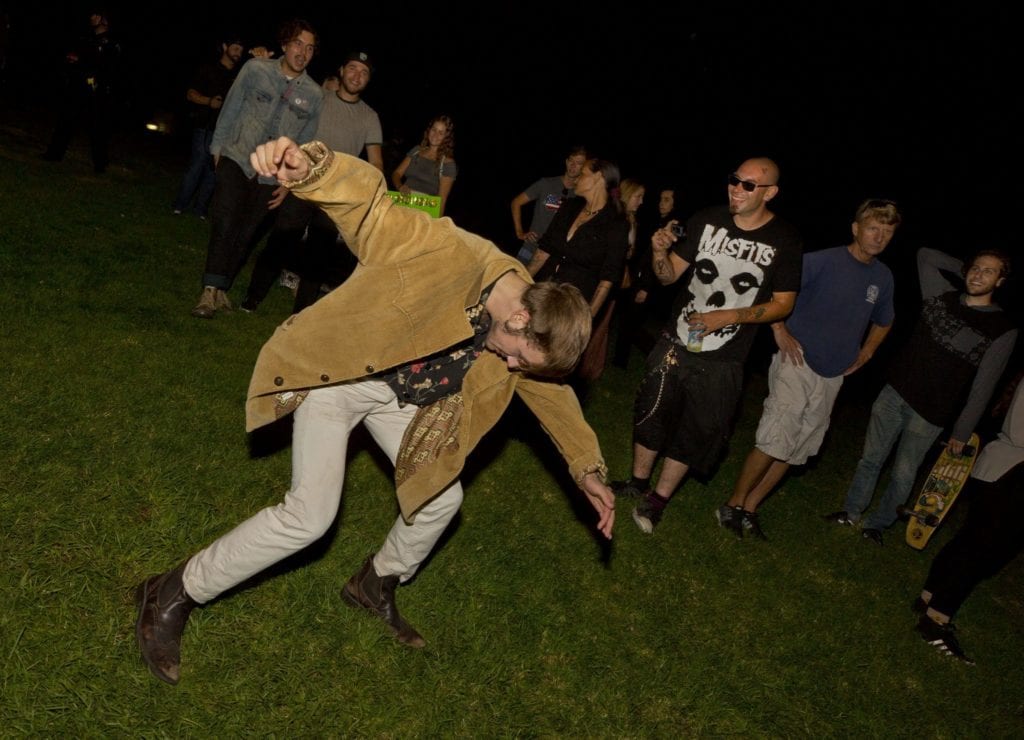 A counter-protester dances to the Dead Kennedys song “Nazi Punks Fuck Off.” Police watch over pro- and anti-immigration demonstrators in Laguna Beach. Martin (no last name given), a Vietnam veteran and Trump supporter, talks to younger pro-Trump and anti-immigration protesters. 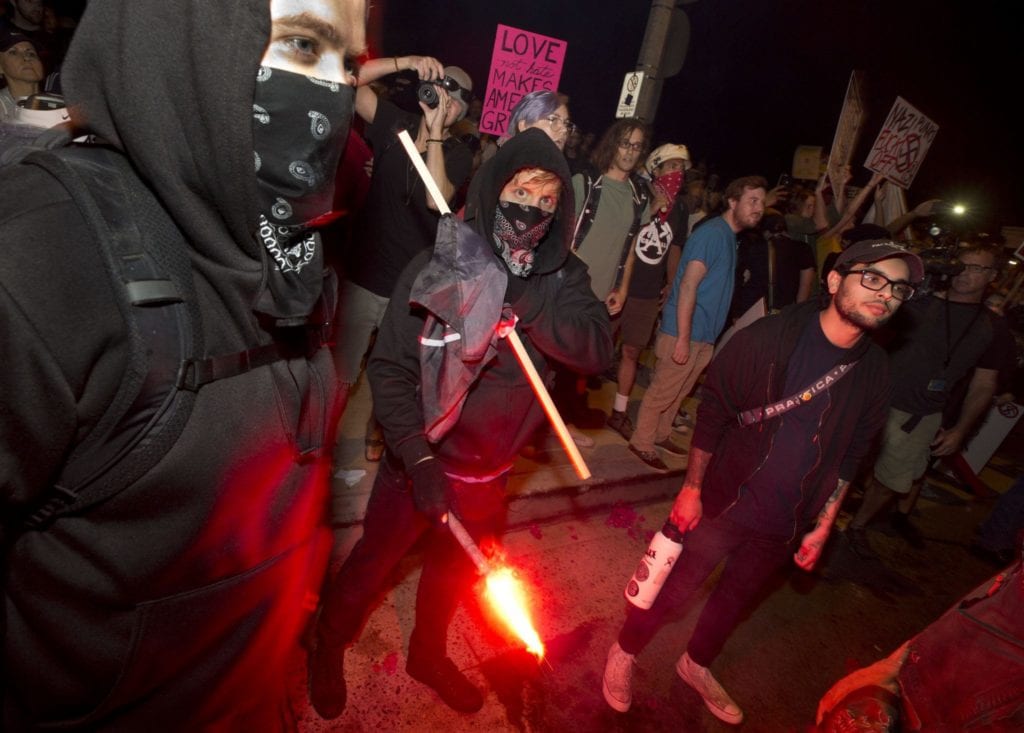 Counter-protesters light up at day’s end. A relaxed moment during a tense day. Related Topics:CharlottesvilleDonald Trump
Up Next