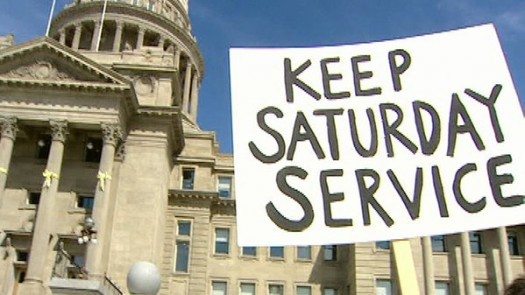 Over the past couple of months, lead stories on every media outlet across this nation have covered the “gloom and doom” angle of six-day postal delivery. But last Sunday, thousands of Letter Carriers, union members and allies came out to set the story straight on the real crisis that is facing the United States Postal Service.

In San Diego, Los Angeles, Fresno and San Francisco, rally participants let the communities they serve know that if the overzealous plan by Postmaster General Patrick Donahoe to eliminate Saturday mail delivery is allowed to happen, it would be one of the biggest mistakes our government would ever make.

Rally participants set the facts straight by letting everyone know that regardless of what he has been threatening to do, Postmaster Donahoe lacks the legal authority to implement this plan on his own. Decisions on delivery schedule are the purview of Congress, and every year for the past 30 years, America’s elected representatives have mandated six-day delivery – a requirement remaining in force today.

Regardless of what a few misguided members of Congress have recently stated, Mr. Donahoe isn’t above the law. Furthermore, his attempted power grab flouts the political will of Congress. As recently as January, a bipartisan majority of representatives co-sponsored measures backing continuation of Saturday mail delivery.

Just on the merits, it’s a disastrous idea. The Postmaster General proposes trading 17 percent of service for two percent in savings – an irrational business plan. Indeed, when the USPS asked the agency’s overseer, the Postal Regulatory Commission, in 2011 to support ending six-day delivery, this illogic was one of the factors cited by the commission in declining to endorse the plan.

So too was the finding that the potential costs savings of eliminating Saturday delivery were wildly inflated. The Postal Regulatory Commission also noted that ending Saturday delivery would disproportionately affect the elderly, rural communities and small businesses. Those small businesses create more than two-thirds of all jobs in this country, and forcing them to hire expensive private contractors on weekends would impose new costs. In truth, ending Saturday delivery would jeopardize the USPS’ future by sacrificing its competitive advantage and hurt tens of millions of Americans – and it wouldn’t even solve the agency’s financial woes.

That’s because most of the red ink has nothing to do with postal operations and nothing to do with tax increases. Rather, 80 percent of the red ink stems directly from the 2006 congressional mandate that the Postal Service do something no other agency or company, federal or not, is required to do: pre-fund future retiree health benefits. That mandate accounted for $11.1 billion in red ink in the Postal Service’s fiscal year 2012 alone.

The rally participants continued to remind the public that it is their Post Office and not one that is being pushed to ruin by a Postal Board of Governors and Postmaster General bent on destroying the very public institution they were sworn to protect. Postmaster General Donahoe should address with Congress the financially burdensome pre-funding mandate of future retiree health benefits, rather than seek to override his authority by gutting a network that provides our nation’s residents and businesses with the world’s most efficient and affordable delivery service while uniting this vast country.

The National Association of Letter Carriers would like to thank all our brothers and sisters from other unions across the state, as well as our community allies, for helping us deliver the truth at last Sunday’s rally. Together, we can work to protect the future so this will not be the end of the Postal Service, but rather the beginning of a Postal Service that can thrive and prosper into the next century and beyond.

(John Beaumont is president of the California State Association of Letter Carriers. His post first appeared on Labor’s Edge and is republished with permission.)

What ‘Zombie Economics?’ The Minimum Wage & Its Critics