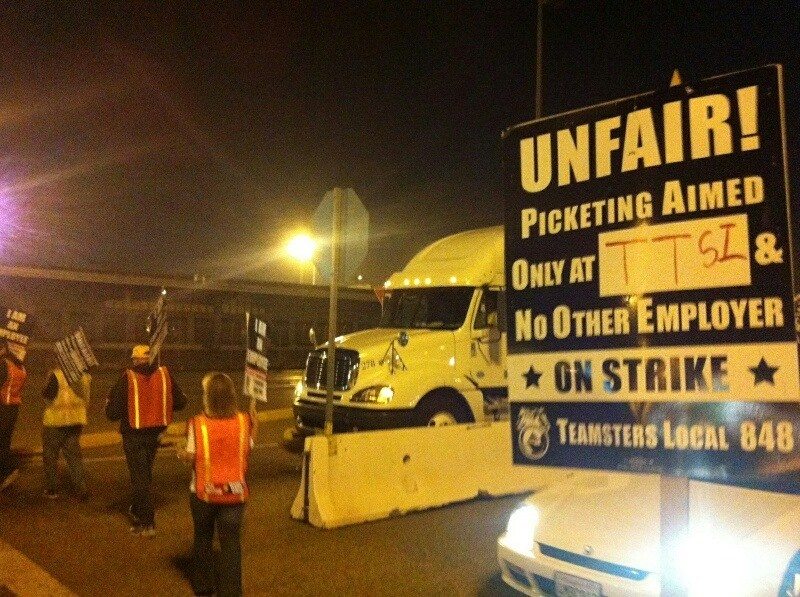 The 48-hour strike by harbor truck drivers ended at dawn today. The haulers have returned to work after drawing an unprecedented amount of public attention to their cause – and without facing dismissals or other forms of retaliation from the three companies they targeted. Those firms — Pacific 9 Transportation, Total Transportation Services, Inc. and Green Fleet Systems – stood accused by the drivers of misclassifying them as “independent contractors,” even as a growing body of labor court rulings shows that the truckers are company employees. As such, they should be entitled to overtime wages, workers compensation, disability and an array of other benefits.

By being placed in the limbo of contractor status, however, the drivers are responsible for all their trucks’ upkeep, fuel and insurance. As a result, like the vast majority of American truckers, port drivers in Los Angeles and Long Beach must subsist on poverty wages.

Some of the drivers joined the work stoppage, which was supported by a coalition of Teamsters, community activists and faith-based groups, for personal reasons.

“I went on strike because two of my co-workers were fired when they decided to take a stand, to fight for their rights,” said Byron Contreras, who works for Green Fleet Systems. “It is illegal to retaliate against workers like this and we are united in our demand for justice.”

“With the support of my family, my faith and the Teamsters,” Martinez said, “I spent nearly 48 hours on the picket line. We spoke with our feet, with our picket signs and with our voices. We know that we have finally been heard. Our resolve has never been stronger: We will not tolerate any form of retaliation, harassment or intimidation in our fight to have our rights as employees – and our right to form a union – recognized.”

[divider]Photo: Night picketing at Total Transportation Services
Related Topics:misclassification of employees as independent contractorsport
Up Next