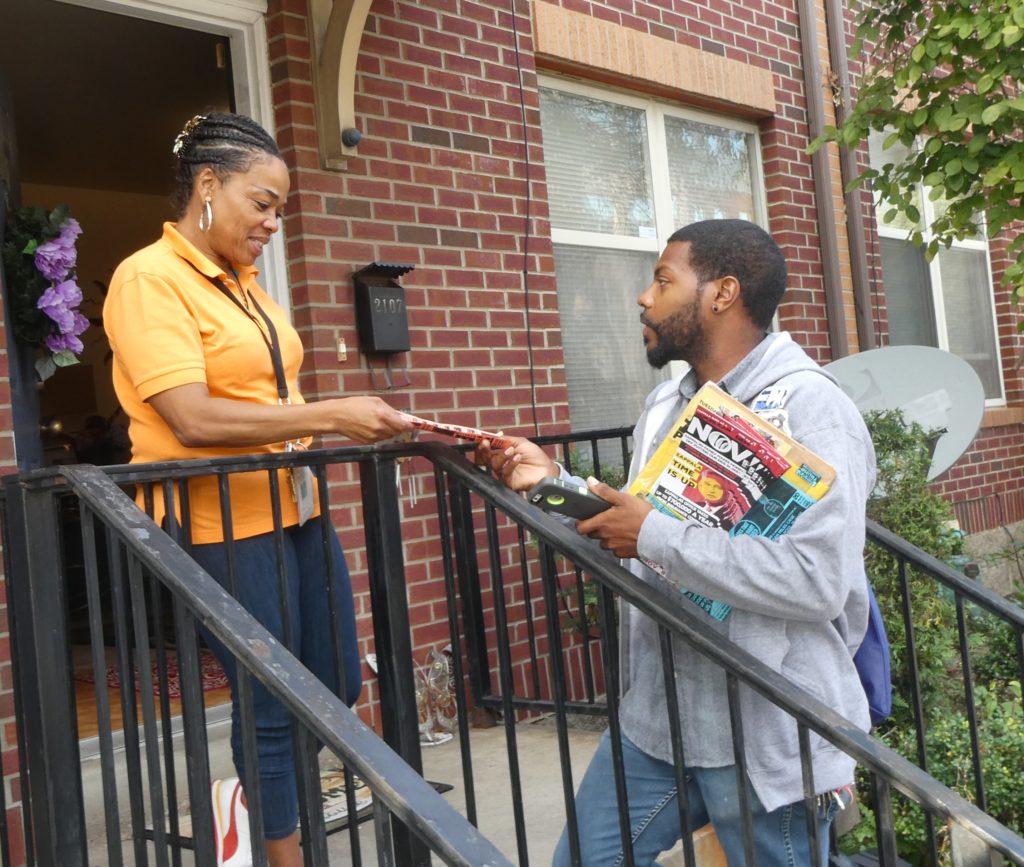 Next week’s election for district attorney in Pittsburgh might seem to have little to do with the 2020 presidential campaign. But the energy being poured into this race could pay electoral dividends a year from now. That’s because the activists knocking doors today are mobilizing a key constituency that the Democrats will need come 2020: Pennsylvania’s African-American voters.

As in neighboring Midwestern states, this swing state saw a decline in turnout in 2016 among black voters over 2012, according to the Brookings Institute. Pennsylvania is a critical battleground state that Hillary Clinton lost by just 44,000 votes.

Notably, the canvassers are working to defeat – not help — the Democratic incumbent, Stephen Zappala Jr. Their endorsed candidate, a longtime public defender named Lisa Middleman, is running as an independent.

Zappala, who has the backing of the Democratic establishment, has been a cause of anguish for many in the African-American community because of what his opponents see as his office’s overly aggressive prosecutions of black men and teens, say his opponents, and his failure to secure a conviction for the police officer who shot and killed Antwon Rose, a 17-year-old unarmed African-American teenager, in 2018. African-American men are booked into Allegheny County jails at almost twice the national average for black men, a group already much more likely to face incarceration, according to a 2015 study by the University of Pittsburgh. 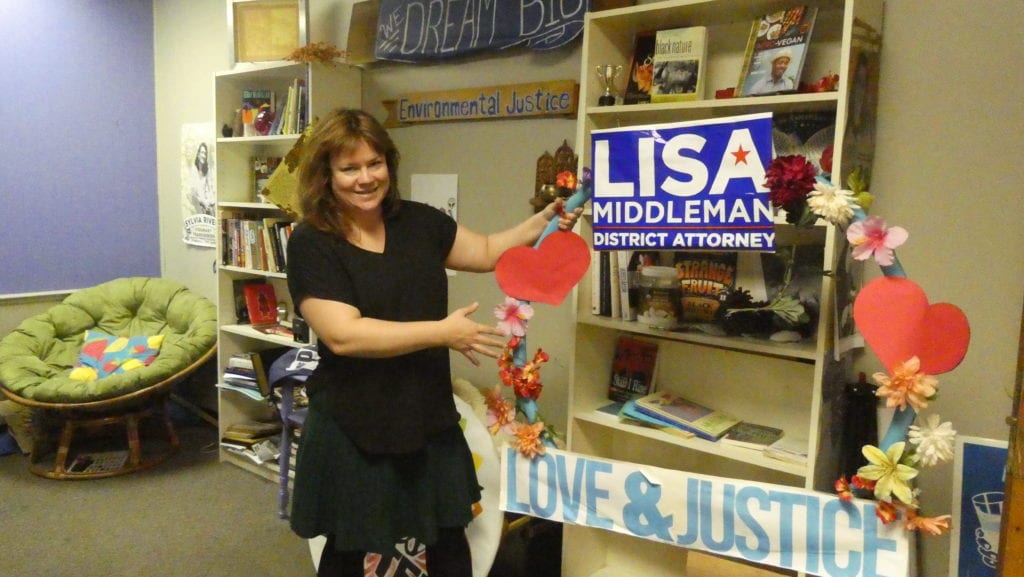 That sense of unequal justice contributes to voter disengagement, says Erin Kramer, executive director of One Pennsylvania, the group spearheading the campaign to oust Zappala. “We’re not trying to get back to anything that existed. We’re trying to make something new,” she says.

Zappala did not reply to interview requests. He has told Mother Jones that he has a track record of holding law enforcement accountable and has touted his advocacy for reducing the use of cash bail and for developing drug courts that link people with treatment.

A mother of three, Kramer is warm and direct, but impatient with slow and incremental change. The daughter of a former store manager at Walmart, she cut her teeth organizing Head Start workers in West Virginia for the Service Employees International Union. (Disclosure: SEIU and other unions mentioned in this story are financial supporters of Capital & Main.) One Pennsylvania mobilizes a multiracial membership around a slew of causes, including educational equity, environmental issues and criminal justice.

One Pennsylvania’s electoral work grows out of the organization’s mission to build the power of overlooked communities and is not its main purpose, says Kramer. It’s what One Pennsylvania does when “we run up against electoral power and have to make changes,” Kramer explains.

It’s also what they do when their members push them to throw down, as they did in the campaign to defeat Zappala. A 21-year veteran of the office, he had already vanquished one opponent, Turahn Jenkins, Allegheny’s former chief deputy public defender, in the May primary.

The paid canvassing team gathers in One Pennsylvania’s ground-floor offices on Pittsburgh’s Northside, readying itself to go door to door. A dog named Merlin wanders the hallways of offices decorated with a busy collage of campaign signs and “ancestor posters” of activist luminaries like lawyer Anita Hill, domestic workers advocate Ai-jen Poo, and the late Pittsburgh unionist Nate Smith.

“Have the pamphlet ready,” Bill Dooley, a tall slender canvasser instructs the newest member of the team. The key, Dooley says, is not to appear flustered when the door opens. The canvassers then practice their rap before heading out for hours of walking. On Saturday, the office will fill with volunteers.

I accompany Gadsden to the Hill District, a historically black community whose row houses and back porches provided the imagined setting of playwright August Wilson’s Pittsburgh Cycle.

A 13-year veteran of political fieldwork, with a sideline as a hype man for extreme sporting events, Gadsden has mastered confidence at the door. When Tammy Jones answers his knock, he launches into a rap that has her nodding. Wealthy defendants who commit major crimes can buy their way out of jail while poor people can’t afford bail, he says, adding,  “Lisa Middleman wants to end cash bail.”

His topic is the criminal justice system, but economic concerns soon slip into the conversation. Jones, who works for a homeless service provider, worries about her clients. “When they do get a job, they cannot afford the housing,” she says. It’s a “vicious cycle.” Gadsden moves to lock in her support, telling Jones that he will later mail her the “promise card” as a reminder to vote.

That day of canvassing was more than three weeks ago. Last Thursday, Gadsden said they had knocked on almost 10,000 doors and were making a second round of door-knocking.

While Pittsburgh has been dubbed the “most livable” city in the country by Forbes magazine and The Economist, a recent report shows that many of its African-American residents face inequities that are even starker than in most cities. For example, mortality rates among black men are higher in Pittsburgh than in 98 percent of similar cities.

The former steel town has leveraged its hospitals and universities to attract tech incubators, new development and Google engineers. But the benefits of post-industrial growth have not reached Pittsburgh’s poorest residents and low-wage workers. Adding to their burdens are a state legislative history of stingy policies toward poor people and a state minimum wage that is the same as the federal rate of $7.25.

“What we spend on education on our K-to-12 education is among the most unequal in the country. Our higher education spending is fourth from the bottom in the country on a per capita basis,” says Marc Stier, director of the Pennsylvania Budget and Policy Center. “We tax less than the other Mid-Atlantic states.”

Pennsylvania has a large conservative rural population. Its big cities–Pittsburgh and Philadelphia–occupy far ends of the state, a fact that “weakens the influence of the urban centers,” says Stier. It’s also a state that has been reliant on extractive industries, all the more so since the boom in hydraulic fracturing (or fracking). Fracking creates union jobs—although how many and for whom is a subject of debate—while also poisoning groundwater and polluting the air.

All this makes working in coalition important. One Pennsylvania often joins forces with other organizations, including its rural Appalachian partner, the Center for Coalfield Justice, in heavily fracked and mined Washington County, which organizes in communities affected by those industries, according to Gadsden.

One Pennsylvania’s base is in the state’s cities, however, and among white and black working-class voters, those who typically don’t have the fixed schedules and resources to allow them to lobby for political change, never mind organize reliable childcare. (One member’s childcare arrangement consisted of stationing her 3-year-old in the McDonald’s PlayPlace where she worked, says Kramer.)

Late last year, the group successfully pushed the Philadelphia City Council to adopt a “fair workweek” policy requiring employers to provide predictable hours for about 130,000 retail and service workers throughout the city.

Last year the group knocked on 225,000 doors and identified 160,000 potential supporters, according to Kramer. Soon they will have the attention of the presidential candidates. On December 14, they will be co-sponsoring a presidential forum on education with the National Education Association, the American Federation of Teachers, the local Pittsburgh teachers’ union, and two national education alliances.

One Pennsylvania’s members will “question the heck” out of the candidates, as Gadsden might put it. But this time the topic will be the proliferation of charter schools, school funding and the “school-to-prison” pipeline, according to Angel Gober, the group’s Western Pennsylvania organizing director.

Meanwhile, Gadsden believes its door-to-door efforts have the potential to transform Pennsylvania politics and possibly the nation’s. He wants precincts, where only 10 percent of voters turned out in 2016, to morph into precincts where 80 percent of eligible voters cast a ballot come election time.

“When you look at how statewide races have been won or lost by just a few thousand votes, this is enough votes to bridge that gap,” says Gadsden.

These are not swing voters. “Everybody who we’re talking to, they are going to vote Donald Trump’s butt out of office,” he adds.