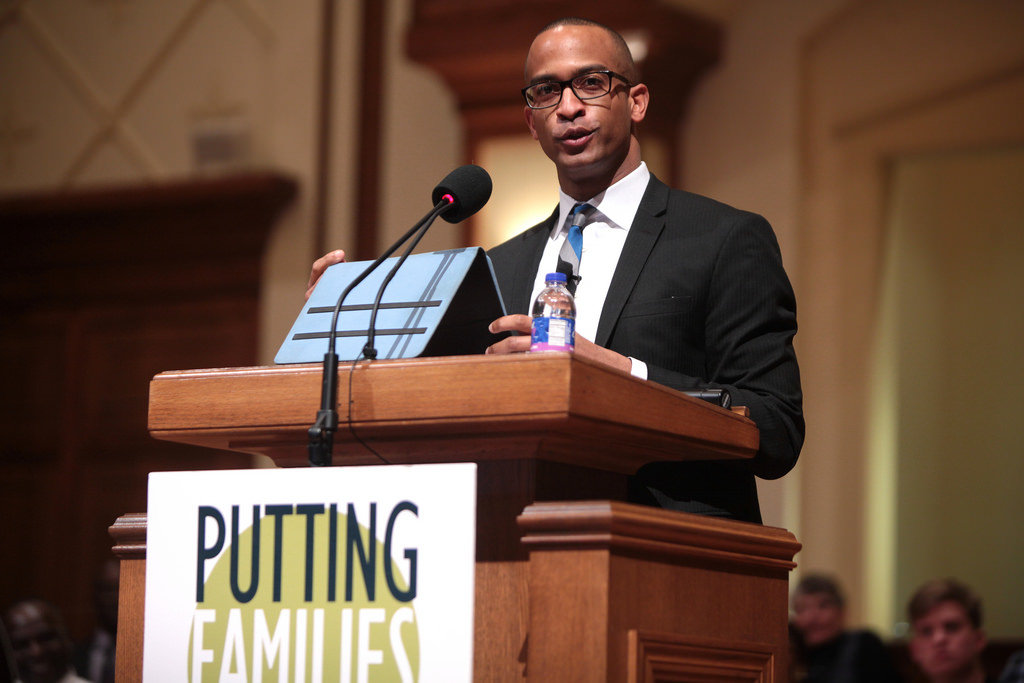 “I would be leery about trying to cozy up and strike deals with a white nationalist,”
says Dorian Warren of the president.

Despite the disappointment of some progressives who had hoped for a “blue tsunami” last Tuesday, the advocate, scholar and MSNBC commentator Dorian Warren says that this election highlighted the power of a mobilized grassroots in the face an electoral system that had been rigged to favor Republicans. Democrats are expected to gain about 35 House seats, while Republicans are likely to tighten their grip on the Senate, although their gains could disappear once races in Arizona, Florida and Mississippi are resolved.

Warren serves as president of the progressive Community Change Action, which partnered with Color of Change, Planned Parenthood Votes and the Service Employees International Union (SEIU), to reach voters of color, women voters, immigrants and other infrequent voters. (Disclosure: SEIU is a financial supporter of this website.) Their Super PAC, Win Justice, announced plans in April to invest $30 million to reach 2.5 million voters in Florida, Nevada and Michigan. That effort resulted in significant wins, he says, up and down the ballots in those states.

Last week, Warren took on a new role as president of the Washington, DC-based Community Change, a non-profit working in partnership with local organizations to support low-income communities. He is also a Fellow at the Roosevelt Institute and serves on the Capital & Main Board. The interview has been edited for length and clarity.

How would you characterize the Democrats’ Congressional gains during the midterms?

I remember in 2010, 2014, all the pundits were saying that the Democrats would never take back the House in this decade, because of gerrymandering. And that just happened. It doesn’t feel like a blue wave because of the structural disadvantages….It doesn’t mean we don’t need to launch campaigns to challenge the rigged rules of democracy, but it also means we can still win even when they try to suppress the vote and change the rules to benefit them[selves.]

Given that Democrats will be focusing energy on investigating Trump and his administration, is there anything over the next two years that the Democrats can do legislatively?

Investigations are coming. There’s no question. And not just investigations into Trump’s tax returns but really important investigations, particularly in the House Oversight Committee…into the harm [federal agencies] have been doing to our communit[ies]….

The thing about [Trump] is that he doesn’t really believe in anything. He was a Democrat before he was a Republican. Not that that means much… I think the House should be offering super bold, progressive pieces of legislation to really put on the table for Republicans, and for the public… Even if nothing passes, I think it sets up 2020 and 2021.

I would be leery about trying to cozy up and strike deals with him….We should not start compromising now, with frankly, a white nationalist.

To that point, there’s a lot of frightening things happening with troops massing at the border. What can a Democratic House do to put a check on that?

One is the investigation and subpoena power of the committees — Judiciary, Oversight and some others. There’s a way in which those investigations can be done differently…Instead of just [holding] hearings on Capitol Hill, say, into [the U.S.] Border Patrol, the House could do hearings [in the field] and ask grassroots leaders to testify about the impact of this administration’s policies on global communities.

The election underscored that we’re a divided country, where you have urban voters rejecting the president’s xenophobic governing style, and rural voters embracing it more tightly. Do you think progressives should be investing organizing energy in the small towns of the U.S.?

That’s a tough one. I think that’s going take some sober analysis of the landscape, and where we have resources and power… Part of the issue is we’re not there. And so, the only thing [rural voters] have is Fox News and Trump, because there is no alternative…. What are the places where we should be going after rural voters? And not just white, rural voters, because there are lots of brown and black people in rural places, too….Texas and Florida come to mind right now. In a situation with scarce resources, where can we actually make some bets in some rural places?

One of the impediments to building a progressive governing majority has been voter suppression in communities of color. What can be done at the grassroots level, to keep this issue alive after the elections are over?

We have to be imaginative in this moment around how do we think of the boldest, most inclusive rules of democracy and then launch campaigns in some key places to start to change those rules. Because that’s what the other side has done since the passage of the Voting Rights Act. They have thought through a long-term campaign, to rig the rules of democracy to benefit them[selves]. It was [recently defeated Wisconsin Governor] Scott Walker attacking public sector unions in 2010 and 2011. And thankfully, bye-bye Walker.