Southern California’s Economy was spared a beating when 62,000 grocery employees belonging to the United Food and Commercial Workers union won a fair three-year contract from three major supermarket chains without having to go on strike. Nothing said Politics more than the Occupy movement– which quickly set up camp in Los Angeles around City Hall. Photojournalist Tony Zinnanti captured the hope and youth of this campaign with a timeless image of a mother and child. 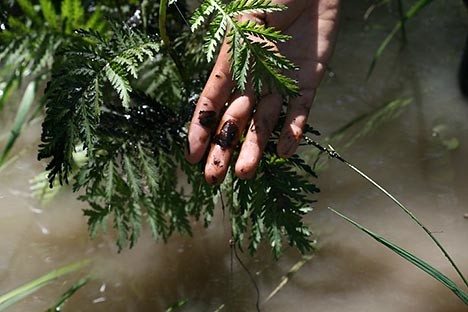 Another year, another oil spill assaulting the Environment. This time it was Exxon Mobil’s turn to dump a little crude — into the Yellowstone River. (Photo: Alexis Bonogofsky/National Wildlife Federation) Meanwhile, conservatives used a scandal involving the innovative (but insolvent) solar tech company Solyndra to beat the Obama administration over the head for its green energy policies. A federal report excoriated Northern California utility giant PG&E for its corner-cutting ways that led to 2010’s tragic San Bruno gas-line explosion. To some the company’s safety-last policies seemed criminal, while to others familiar with PG&E’s lobbying campaigns against regulation, it was Business as Usual. (Photo: Mbz1/Wikipedia) Hollywood’s treatment of The Help became a sleeper hit and Oscar contender – but its questionable portrayal of black-white relations during the civil rights struggle only helped reignite another front of the Culture wars.