Lemons Lemons Lemons Lemons Lemons, Sam Steiner’s 85-minute two-hander, comes packaged with an intriguing premise and the technical expertise of two of the L.A. theater community’s most established artists. Unfortunately, that’s not enough to compensate for an opaque, meandering script and uneven performances by actors understandably at sea with the flummoxing dialogue.

The play poses the question: What happens to relationships when a repressive government rations the number of words that can be spoken each day?

In the story, Oliver (Philip Asta) and Bernadette (Brynn Alexander) are two lovers who already have problems communicating even without the law’s interference. We first meet them rendezvousing at a pet cemetery, concerned that their relationship will be discovered by others (although why this would imperil them remains unclear). Bernadette is a family lawyer, an attractive gal with attitude who is not fully cognizant of her sense of privilege. The more down-home Oliver adores her nonetheless, and mostly absorbs her putdowns. When he does challenge her, he does so falteringly lest his comment provoke more rejection. 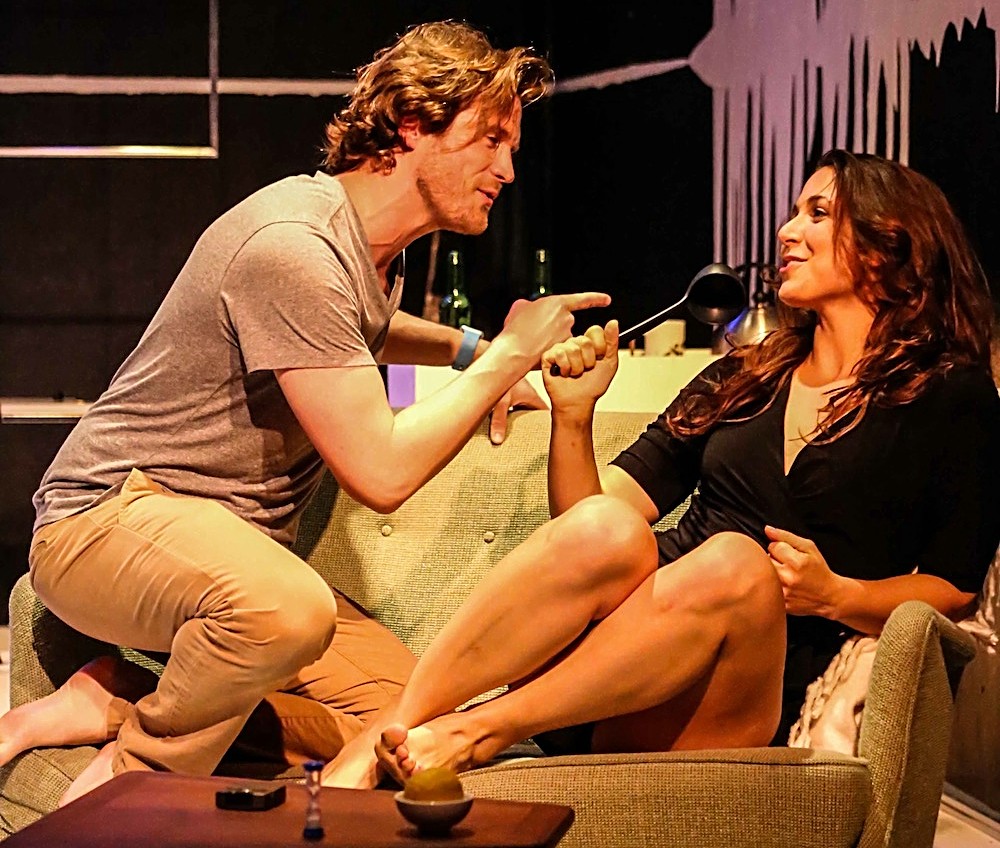 The play is structured as a series of short, cryptic interchanges, with transitions signaled by a loud startling sound (designer Cricket S. Meyers) and accompanying flashes of colored lights (designer Matt Richter) strategically embedded around the proscenium floor. At some point — but notably not at the beginning — the characters discuss an impending law that will limit conversation between themselves and with others to 140 words a day. They explore ways to get around this mandate: tapping on the floor using Morse code, for example, or consolidating two or more words into a single utterance. Other scenes portray Oliver confessing to Bernadette his involvement in anti-government protests, which she disapproves of, especially as they involve his contact with a former girlfriend.

These sequences furnish welcome, albeit scant, context to a piece that promises to be intellectually and/or politically involving but isn’t. Steiner never bothers to supply background details about the oppressive regime his characters are valiantly trying to cope with, nor does he apply a comprehensible chronology to either the narrative’s political thread or its personal one. The cryptic interaction between Oliver and Bernadette remains pretty much the same both before the law is implemented — somewhere in the middle of the script — and after. This makes for a frustrating evening at the theater, all the more disappointing as the basic idea here is so promising, given the current administration’s predilections to stifle controversy and criticism.

Director Jen Bloom does a respectable job of engendering dynamic from the two characters’ interaction, but it’s not enough to sustain interest. Jessica J’aime’s costumes enhance Bernadette’s appeal as a come-hither-but-not-too-close kind of paramour. Her performance is satisfactory if a bit stilted. Asta brings a good deal more substance to the vulnerable working-class Oliver, and together they generate an appropriate chemistry.

Related Topics:Theater Review
Up Next