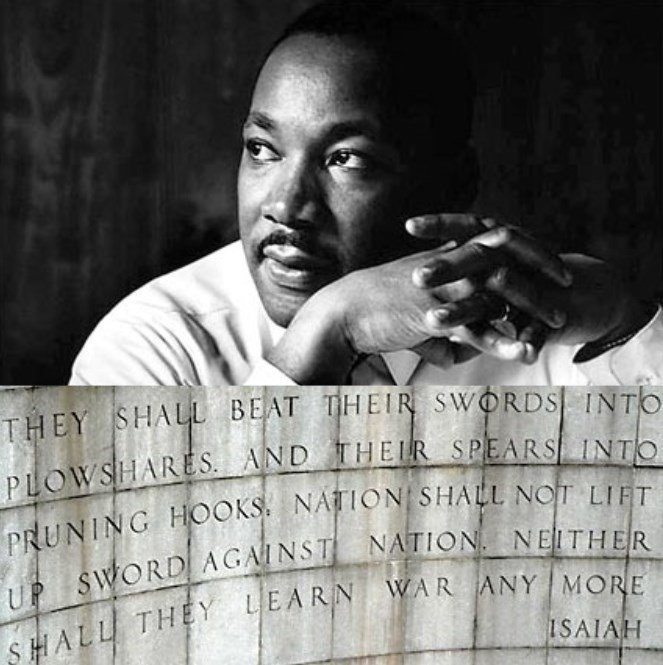 As this country hurtles into a New Year, I am grateful for the stop sign at Martin Luther King Jr.’s national holiday. It offers time for me to consider again the meaning of my life as well as to our national purpose. This year I am remembering that King’s life focused not only on civil rights, but also jobs. His vision of justice went beyond voting and equality to decent work for livable pay. That’s why he went to Memphis – to support striking garbage workers.

I am old enough to remember the early days of the peace conversion movement in the 1970s. Following the end of the war in Vietnam many people thought that the savings no longer needed for the military in that misadventure could be turned into social investments such as hospitals, schools and such, bringing good jobs with them. Again, at the end of the Cold War, in the late 1980s similar ideas had been proposed — the Speaker of the House even sought to create a commission to study the possibilities.

Now the issue of jobs presents itself again. If we need to keep 75 percent of known fossil fuel reserves in the ground to reverse human-caused climate change, then all those people who dig coal and drill for oil and gas need something else to do to provide for their families and sustain the often rural communities that have grown up around oil fields and mines – places like Wyoming, West Virginia, Kentucky, not to mention urban California areas such as Carson and Wilmington, that offer good union jobs.

People who dig coal and drill for oil need something else to do to provide for their families.

Catholic priests in these regions trying to teach Pope Francis’ encyclical on climate change are facing some scared parishioners, even as they themselves wonder, “How much of a price does Appalachia have to pay?” as one priest asks. “The fact is, we’re going to have to pay a higher price than the average person reading that encyclical.” That’s a serious concern.

So I was delighted to see that a major economist has written a book on this subject, and as usual Robert Pollin’s research upends the conventional wisdom. I first learned about Pollin’s work during the struggle for a living wage in Los Angeles. His studies demonstrated the economic benefits that accrue to a region by raising people’s incomes – especially at the bottom. We depended on his research to make our case.

In his new work, Pollin assesses the ability to convert this economy from fossil fuels to alternative power. He thinks it can be done over the next 20 years by investing “between 1.5 and 2 percent per year of the gross domestic product to energy efficiency and clean, low-emission renewable energy sources.” That, in itself is remarkable. Many critics of human-caused climate change don’t think it can actually be done at any price. He argues that we can make the change without wrecking the economy.

Furthermore, he and his fellow researchers demonstrate that this transition can create many more jobs than it now takes to satiate our hunger for fossil fuels. He looks at six of the world’s “large-scale fossil-fuel-producing countries” – Brazil, China, India, Indonesia, South Africa and the United States – and shows how in each case switching to renewable fuels generates substantially more jobs than staying with fossil fuels. In the case of Indonesia, more than three times the number of jobs.

Economics and labor writer Jonathan Tasini also worries about those fossil fuel workers and their communities. He thinks that spending $4 to $7 trillion over the next 20 years would support retirees, sustain localities, and create new decent jobs. Those are great goals, but that’s a lot of money. Tasini puts such an expenditure in the context of a U.S. economy which was worth $17.7 trillion in 2014. He compares it to the $4 to $6 trillion spent on the Iraq and Afghan wars, as well as the $2 trillion used to shore up the economy following the Great Recession. Such amounts of money are not only manageable, they are in the realm of our recent experience.

When Tasini talks about changing our economy from fossil fuel based to renewable energy while creating jobs, he speaks of a “just transition.” He means that we can make the changes that save the earth and include justice for workers, while preserving their communities.

The phrase reminds me of those peace conversion discussions from decades past. They went far beyond simply creating more jobs. They would have turned some critical resources toward rebuilding America. The phrase also brings to mind Dr. King’s commitment to justice as well as jobs, which those priests who are trying to teach the pope’s encyclical could find helpful. It’s a national purpose worth our efforts — one that could bring more jobs and save the earth. It calls me to think deeper and do more.

Martin Luther King Jr. on the Haves and Have-nots