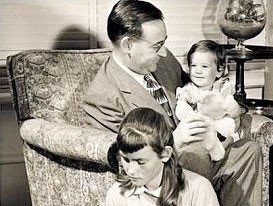 The movie California State of Mind: The Legacy of Pat Brown, which has been making the rounds of public TV channels, is a tender blend between a family memoir and a nostalgic look at a more hopeful era in California history. At times it makes you want to weep for what we once had and will probably never have again.

The producers, Hilary Armstrong and Sascha Rice, granddaughters of the man who was governor from 1958 to 1966, weren’t troubled by the mix of the personal and the political, much of it in the form of old film clips. And in some ways the past forty years have been a sort of family history: two governors Brown, a treasurer Brown who also ran for governor, plus the half dozen lesser public offices those Browns held.

Much of the movie’s history is familiar. Pat Brown, as much as any individual, was the builder of modern California:

The film doesn’t tell you that the Master Plan was as much the work of U.C. President Clark Kerr, who wanted to protect U.C.’s exclusive authority to grant doctorate degrees, as it was Brown’s. But low or no tuition was nonetheless an unprecedented commitment for any state to make.

Some took a lot of doing. The Central Valley Project passed by a nose over the vehement opposition of northern California interest groups who resented southerners taking what they regarded as their water.

In 1964, the same year that voters passed Proposition 14, overturning the Rumford Act, they also elected the right-wing demagogue Max Rafferty as the state’s superintendent of public instruction. [Frying Pan News correction: Rafferty was actually elected in 1962.]

Nor does the movie tell you that in his first terms as governor, Pat’s son Jerry spent a lot of energy disparaging what his father had done.

And yet, looking from the present, the two decades after World War seem like a special gift, not just for the things that the state accomplished but for the people it elected to high office – Brown and Goodwin Knight, the Republican who preceded him and Earl Warren who preceded Knight and Tom Kuchel, the moderate Republican who represented California in the U.S. Senate from 1953 to 1968.

Kuchel, a leader of the GOP minority in the Senate, was co-floor manager for the Civil Rights Act of 1964 and the Voting Rights Act of 1965. It’s inconceivable that any Republican would do anything like that today. Defense Secretary Leon Panetta, then also a Republican, began his political career as Kuchel’s legislative aide in Washington.

Unfortunately “California State of Mind”, which runs just under 90 minutes, doesn’t have time for those things, or for the even broader cultural and political world that, for all the hurdles he faced, allowed Brown to pursue his initiatives.

In 1962, when California surpassed New York as the largest state in the union, our population was overwhelmingly white – our “immigrants” came from Kansas and Iowa, not from Michoacán and Zacatecas. They had grown up during the Depression and World War II, when the country came together as it never had been before and would never be again. Many of them had first seen California when they were shipped through as GIs on their way to the war in the Pacific.

We believed in community and in what government could do – had to do – in creating the economic conditions, the infrastructure, the social security and the educational infrastructure that were essential to a great society.

The children in our schools were our children; the voters were the parents of those children, not an aging generation that was increasingly uncomfortable — if not altogether hostile to – the culture growing up around them. They did not fear the future; they welcomed it. To say it again, seeing that movie makes you want to cry.

Peter Schrag is the former editorial page editor and columnist of the Sacramento Bee.  His new book is Not Fit for Our Society: Nativism, Eugenics, Immigration.