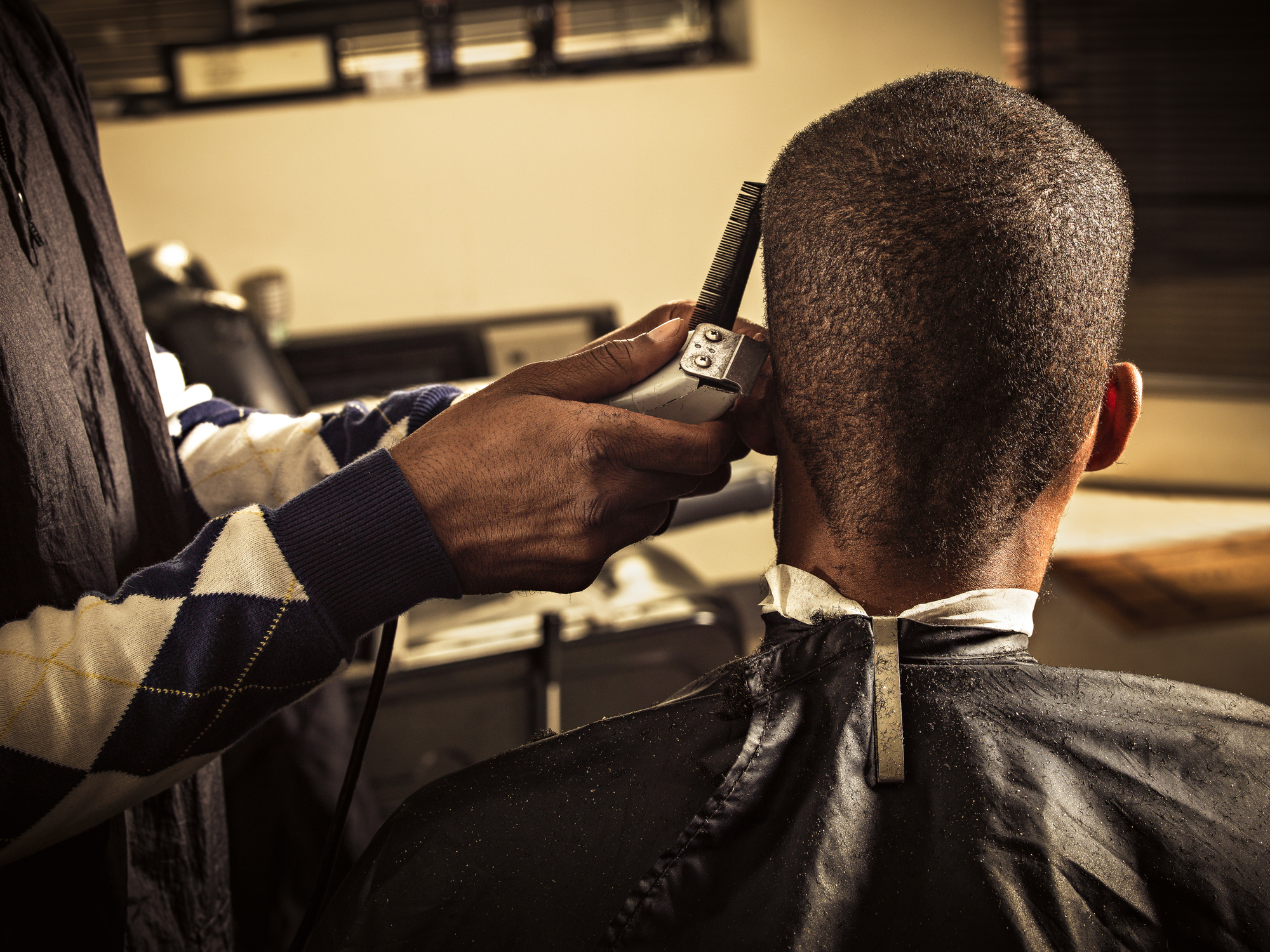 In the near future, Black men in Compton may be able to get a haircut, have their blood pressure checked and maybe even get their COVID shots all in one place: the barbershop.

This is the vision of TRAPMedicine, an organization led by a soon-to-be doctor and three others who are already practicing. All are Black men concerned about health inequities in their communities. They want to create a “barbershop wellness hub” that provides a wide variety of basic health services alongside barbers cutting hair and dispensing health advice.

Offering health services at barbershops is not new. TRAPMedicine is expanding on a concept that barbers, often trusted advisers in Black communities, can work with medical professionals to tackle major health disparities affecting Black men.

One landmark study that paired barbers with pharmacists in 78 Los Angeles County barbershops saw such dramatic improvements in barbershop patrons’ blood pressure that it spawned more such pop-up health clinics nationwide. The study, published in the New England Journal of Medicine in 2018, was the first to develop partnerships between barbers and pharmacists who dispensed medication. Previous studies relied solely on barbers.

“We want to open up our own shop,” says TRAPMedicine founder Jahmil Lacey, a third-year medical student at Charles R. Drew University of Medicine and Science. “One of the things that we think is important is that we try to become a sustainable venture that’s about advancing health equity but is also about becoming financially viable.”

Even before the 2018 study, health providers in other cities and states set up such flash clinics. But they were unsuccessful in figuring out how to keep these running long term due to a lack of funding, a dearth of health care volunteers or space constraints, among other difficulties.

In Colorado, a program that began with blood pressure screenings at a single barbershop grew to include 12 barbershops and salons over a five-year period.

“At some point, we started having conversations about what we were seeing, things such as end-stage renal failure, strokes. We began to see patterns.”

The Black Barbershop Health Outreach Program was a nationwide initiative based in Los Angeles and founded in 2006. The program reportedly tested more than 30,000 men for diabetes and high blood pressure before transitioning during the pandemic into an app that people can use to obtain telehealth services.

TRAPMedicine — whose acronym refers to Trust, Research, Access and Prevention — is building on the knowledge gained managing pop-up clinics in Oakland and Los Angeles over the past few years. In Oakland, the organization has partnered with Legends Barbershop and Roots Community Health Center to offer health screenings. In Los Angeles, it has collaborated with the county’s Department of Public Health and others to offer a menu of services including HIV testing, vaccinations, mental health consultations and blood glucose tests.

Turning the “barbershop wellness hub” into a business is an innovative technique to combat health disparities. The point is to diversify health care access by finding excluded or uncared for people where they are, and to tap into the trust in barbershops that are anchored to local communities.

As Black male health providers, they have an intimate knowledge of the community they’re seeking to treat, and TRAPMedicine’s Lacey and his team also know first-hand the challenges Black men face in accessing quality health care.

“We all met at different points in our lives,” Lacey says. “At some point, we started having conversations about what we were seeing, things such as end-stage renal failure, strokes. We began to see patterns.”

Black men are more likely than any other demographic to die from heart disease, stroke, cancer, asthma and diabetes. Many social factors play a role in these health outcomes, but most major medical organizations recognize racism as a major barrier to achieving health equity. Capital & Main has reported that medical providers even show bias against Black people in such patients’ electronic health records.

Residents of Compton are more than twice as likely to die of cardiovascular disease than residents in wealthier communities in the county with better health care options.

The idea of a barbershop wellness hub resonates with Eddie Martinez, executive director and co-founder of the Latino Equality Alliance in Boyle Heights. Martinez has about 25 years of experience advocating for better health options for disadvantaged communities. He’s also a regular at barbershops.

“You have lots of conversations in that space,” Martinez says. “You trust that it’s a safe space.”

Martinez sees the pop-ups as community gathering spots, with customer relationships that often go back decades.

Johnson & Johnson recently brought together a judging panel that selected 14 health equity “changemakers” around the country that are tackling racial health disparities. Martinez was on the panel, which chose TRAPMedicine from among 186 applicants to receive a $75,000 award, mentorship and other resources, according to Kristina Chang, a Johnson & Johnson spokeswoman.

Lacey is using the Johnson & Johnson grant as seed money to open a Compton barbershop.

Compton is home to about 100,000 residents suffering from health inequities so severe that their life expectancy is 10 years less than that of residents in Walnut, which has the highest life expectancy in the county, according to Los Angeles County Department of Public Health data.

Residents of Compton are more than twice as likely to die of cardiovascular disease than residents in wealthier communities in the county with better health care options. Also, 31% of adults in Compton lack health insurance, according to a 2018 report by the Los Angeles County Department of Public Health.

A 2018 study saw 319 Black men lower their blood pressure with the help of pharmacists working in conjunction with barbers.

History has undermined the trust of many Black people in the health care system. There are many reasons for that, but a key one is the Tuskegee Syphilis Study, conducted between 1932 and 1972 by U.S. Public Health Service officials on 399 Black men with syphilis. None of the men were told they had syphilis or received penicillin after that simple treatment was discovered in 1947. More than 100 men died as a result.

Both pervasive institutional and individual racism resulted over a period of generations in an erosion of trust in health care providers, particularly among Black men, who remain reluctant to visit a doctor. Gaining the trust of such a skeptical population often seemed like an insurmountable barrier until the 2018 barbershop study.

Community advocates are encouraged by the promising results of that study, which saw 319 Black men lower their blood pressure with the help of pharmacists working in conjunction with barbers.

Researchers at the Smidt Heart Institute at Cedars-Sinai conducted a follow-up study to further identify the successful elements that could be replicated on a larger scale to create more equitable outcomes for larger groups of Black men.

“Direct contact with the pharmacists in such a trusted place gave them a sense of agency they didn’t feel in clinical settings, and the fact that they had discussed the study with barbers, family and friends made them feel more committed to improving their health,” researchers concluded during a presentation at the American Cardiology Scientific Session in Washington, D.C., in April.

Lacey envisions a barbershop where barbers are trained to have conversations about health care with clients while giving them a fade or a tight cut. Those clients will also have the opportunity to consult health professionals on the spot.

“The benefit of opening our own barbershop is that we can create that space to be able to have those conversations to be able to expand our menu of services and to create the type of health care that people deserve,” Lacey says. “This is part of the process of rebuilding trust in the health care system. It’s providing quality services for people that honor and give them dignity, that meet them where they are, and that are provided by people who look like them.”