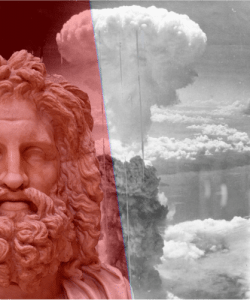 “Can Google Solve Death?” read the cover headline of a national news weekly. It cleverly enticed readers to read the story inside. The question also represents one of the major problems facing human beings. No, not death, but hubris.

Hubris was one of the themes of the great Greek tragedies in the fifth century before the Common Era. The Greek playwrights like Aeschylus, Euripides and Sophocles understood all too well the capacity of humans to extend themselves beyond their ability to limit the damage caused by their actions.

So great families disintegrated, monarchs fell and society itself came close to collapse – all because people in power could not stop themselves from reaching beyond their limitations as human beings. We do the same, but in new ways with unknown consequences.

Global climate change comes instantly to mind. Last spring, for the first time in human history, our planet’s atmospheric carbon dioxide levels passed the marker of 400 parts per million. The polar caps are melting at an unprecedented rate. Today ships carry iron ore from the north coast of Russia to the steel mills of China through the once frozen-solid Northwest Passage. A federal study release in July says that rising seas and higher temperatures will lead to power plant shutdowns — and not because of sunspots or other natural phenomena. These are the results of human activity interrupting the patterns on which the wealth of nations has been built in the past century, with us in the lead.

The nuclear age offers another threat to our lives beyond human control. Eric Schlosser’s new book Command and Control surveys the safety records of nuclear weapons. He found 700 “significant” accidents involving 1250 nuclear weapons between 1950 and 1968 just in the U.S. In 1980, a hydrogen bomb missile warhead many times the strength of the one America dropped on Hiroshima, came within seconds of detonating when a routine maintenance project in an Arkansas silo went awry because a worker dropped a wrench socket. Of course the reactor at Fukushima continues to threaten not only Japan, but everything downwind, include the North American continent. Now nations are calling for an international response because conditions are only worsening. Closer to home, Southern California Edison shut down its San Onofre nuke power plant because of human error. These situations are more signs of hubris – people have created things we cannot manage.

Oil poses yet another set of consequences we cannot control. In March a train derailed in Minnesota spilling 15,000 gallons of Canadian tar sands crude. Just days later, an Exxon Mobil pipeline spewed more than 12,000 barrels of oil onto the streets of Mayflower, Arkansas. Last summer’s fire at the Chevron refinery in the Bay Area town of Richmond resulted from a ruptured pipeline that investigators say could have been avoided, except that the company ignored basic safety recommendations.

The list goes on: California farmers draw down groundwater supplies faster than they can be replaced. So do farmers in the Midwest. Pesticides and herbicides disorient and kill bees that are essential to pollinating much of the fruits and vegetables we eat. Genetically modified seeds cross-pollinate into natural crops. Floods in Colorado collide with fracking wells, spewing a chemical soup impossible to contain. We allow people to build homes where fires will burn, intensifying the catastrophe.

Simply put: We humans make decisions and invent technologies with results beyond our capacity to command and control. We do these things because we can, not because we should. Tragically, we do not stop ourselves because we believe in modern technology. We fail to change directions because big money is involved or somebody holds too much power. We do it because we do not know any better than the Greeks how to rein in our hubris. Good luck, Google.

The Animals Are Leaving