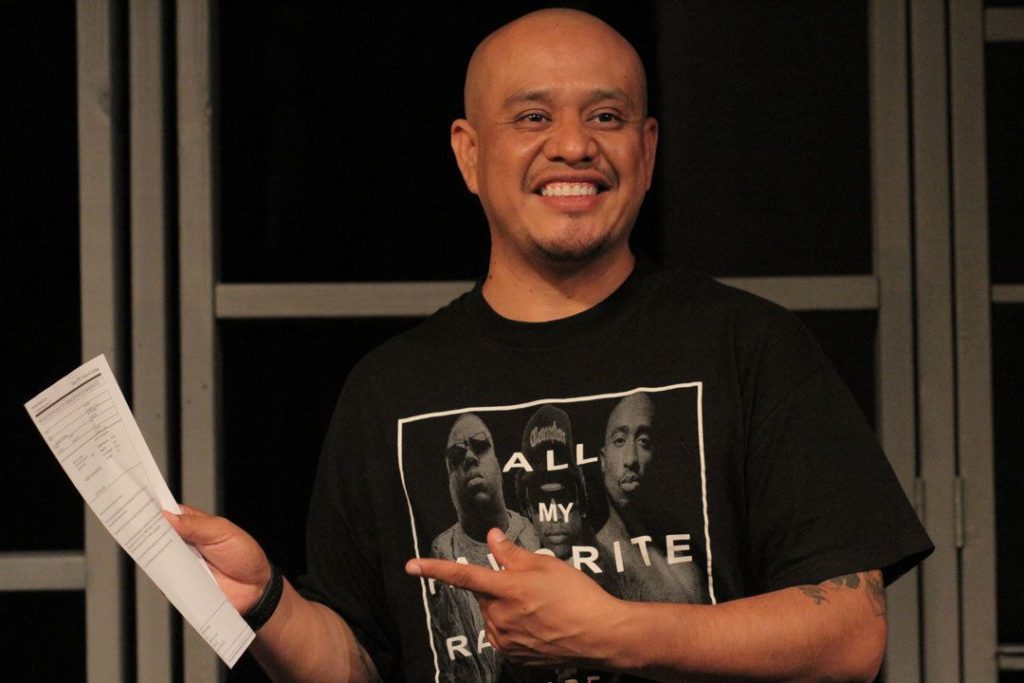 Like millions of other undocumented people, writer/performer Alex Alpharaoh was a child when he arrived in the United States. Born Anner Alexander Alfaro Cividanis in Guatemala, he traveled most of the hazardous journey across Mexico in the arms of his 15-year-old mother. When she grew exhausted and he fell ill, she entrusted her baby to a solicitous coyote, who promised to smuggle the 3-month-old infant across the border, concealed in the back seat of his car. The coyote made good on his promise, and Alpharaoh’s mom made it too.

So began Alex Alpharaoh’s life in the U.S., one outwardly typical of his younger brothers and sisters except that he, unlike his siblings, lacked papers, and would spend years — despite his achievements as a student, social worker, poet, performer and parent — in a labyrinthine dodge of ICE and the system at large.

WET: A DACAmented Journey is Alpharaoh’s autobiographical account of life as a DREAMer, from his elementary school days when a visit to Sea World was verboten, lest it entail tangling with the border patrol in San Clemente, up through his recent byzantine experience traveling back to Guatemala in order to re-enter this country as a legal immigrant. The one-person show was produced by Ensemble Studio Theatre/LA as part of their True Story program, which encourages people to create solo works out of their own true experience.

In his script, Alpharaoh (his professional name) alternates between several personas: Alpharaoh, spoken wordsmith and poet, who voices the fear, conflict and inner chaos common to many undocumented immigrants living a fractured existence; Alex, a down-to-earth guy you might have met anywhere — coffee house, metro, theater — who openly shares some of the Kafkaesque episodes he’s endured as he fights to remain in the only country he’s ever known; and Anner, Alex’s reactive self, whose understandable rage sometimes subverts his reason. 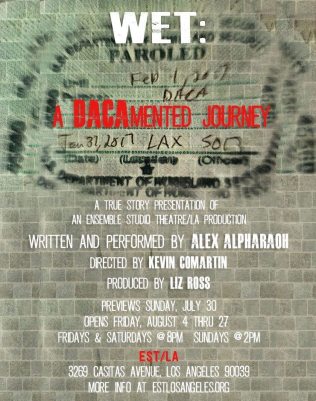 As Alex tells it, his life flowed (if not smoothly, then without threatening incident) until he blew the whistle on an elder abuser at his workplace, and a follow-up request that he testify in court led to the DOJ’s discovery of his status. With the help of a lawyer, he navigated the crisis with fines and public service. Then, in 2012, he found new hope in the Deferred Action for Childhood Arrivals (DACA) policy sponsored by President Obama that offered temporary deportation amnesty to undocumented immigrants who entered the country as children. That hope was shattered last November when the 45th U.S. president (Alpharaoh never refers to him by name) was elected.

Significant and compelling in outline, WET occasionally bogs down in the recounting of bureaucratic events not inherently dramatic yet part of the chronology of Alpharaoh’s quest for legal status. An alternate thread involving Alex’s father — and the feelings of betrayal and abandonment he engendered when he left his family — might be stronger were it integrated into the narrative earlier. And though sound, some finessing might undo the snarls in this inaugural version of a fundamentally engaging script.

Under Kevin Comartin’s direction, the production’s strongest component is Alpharaoh’s theatrically adept performance. The immediacy with which he addresses his audience, his skillful use of mimicry in portraying minor characters, and his intense energy and commitment invite empathy while illuminating the problems that weigh on our undocumented friends and neighbors.

The Filmmakers of “Whose Streets?” Provide Concrete Images of a Community in Peril