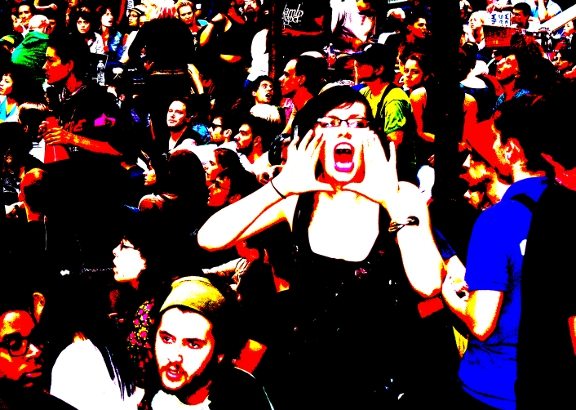 It seems inevitable that national coverage of the Occupy movement has been dying down. The sporadic stories I read are of arrests of occupiers in different cities, but I surmise that this too will eventually become old hat in the media and we will soon settle our attentions wholeheartedly on the presidential election, which in my opinion is a real shame.

I’ve grown weary of our gerrymandered elections. For a country that holds freedom of choice so dear to American life, I find it odd and disheartening that we are really only given two parties to choose from. The consumer in me gets depressed every election cycle. It’s akin to going to Ben and Jerry’s and being told that you can only have chocolate or vanilla.

My sincere hope is that this year the narrative is different. I am pinning my hopes on the Occupy movement to resurrect itself to the national news media and overshadow our fixed-choice election for the presidency. What the movement needs is a fresh news cycle designed from a place of strategic thinking.

I once took a playwriting course where the instructor taught the class about the importance of the obligatory scene. The obligatory scene goes something like this. A man makes a statement towards the beginning of the play with a line of dialogue. “I will never shoot a gun.” It suggests a reverse psychological opening in the mind of the audience, a leap forward in time where everyone knows that before this play is over that man will most certainly be shooting a gun. He has to for drama’s sake. Anything else would be robbing the audience of the obligatory scene.

The occupiers may not realize they’ve done this, but they’ve created an obligatory scene in the mind of the public. By professing to be leader-averse, they’ve left us wondering — when will there be representatives of the group as a whole? When will the movement start speaking in a few chosen voices rather than the discordant and sometimes conflicting ramblings of rightly irritated Americans?

It’s a tricky question for a bottom-to-top movement whose members are especially wary of being co-opted by other groups, but I would argue that it’s more likely to be co-opted if they don’t choose representatives of the movement. Chaos breeds opportunity. The Democrats are practically waiting in the wings with their arms wide open.

There are wonderful, natural leaders who have come out of the Occupy movement. Jesse Lagreca has become a great example of someone who occupiers respect. He is nimble of mind and has shown his composure amazingly well in countless television interviews including a smack down of a Fox news reporter that went viral on YouTube. Jesse knows the issues. I believe he would be an extremely important asset regarding leadership of the movement. I suggest the general assembly in New York take a vote on him and make him a delegate that represents their keenest minds and best ideas.

Closer to home, I have witnessed Mario Brito become an amazingly articulate spokesperson for Occupy L.A. He must be effective because many right-wing blogs have already tried to tar him as a communist. Apparently it’s easy for the right to confuse union activist with communist.

My point is that we have plenty of leaders worthy of being voted on from all over the country and all over the world for that matter. The general assemblies must put their natural leaders to a purpose not only for its own psychological development of seeing itself progress, but for the sheer survival of the movement itself. Giving the movement representable leaders would show that we’re not entirely cynical and that we can trust a chosen few to do the will of the rest of us. Our platforms are already clear. Our leadership isn’t.

Let’s vote. Let’s send our delegates to a Philadelphia-style convention. Let’s get a fresh news cycle that isn’t about arrests, but about the Occupy movement rising to a new level. Let’s overshadow the Presidential election with a new narrative.

It’s an obligatory scene that I’m dying to see.