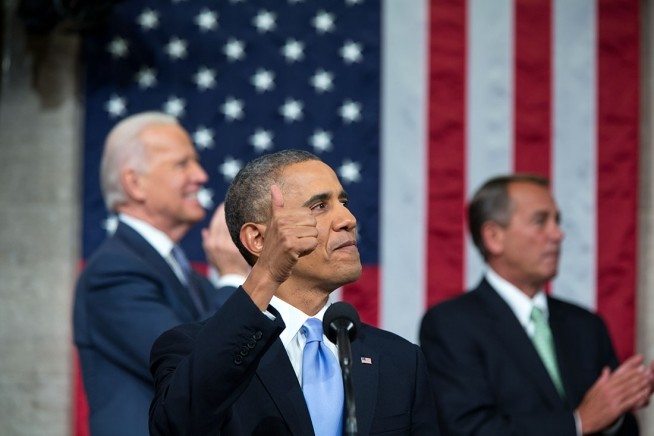 There was something tantalizing about Barack Obama’s State of the Union speech last night. When was the last time an American president talked about the simple human cruelty of our Dickensian sick leave and maternity policies? Or told CEOs to just do the right thing and raise wages for their workers?

What made Obama’s speech compelling is that he did more than just issue platitudes — he announced his decision to use executive authority to increase the pay of workers employed by companies that contract with the federal government. That will mean a nearly $3 an hour raise for hundreds of thousands of people. In an era of Tea Party-engineered partisan gridlock over pretty much everything, that’s nothing less than a seismic shift.

So why didn’t the State of the Union address leave me popping the champagne and toasting to an impending economic realignment that would reverse the nation’s slide back to the same levels of inequality we faced before the Depression? Because, as welcome as Obama’s words and action are, they’re not nearly enough.

If the President had taken the time to paint a more detailed picture of the utterly stark reality facing most Americans, the inadequacy of his solutions would have been apparent. Imagine if the President had told the country that 43 percent of households in America — some 127.5 million people — are so short on savings that if they were to experience a quick drop in income, they would fall below the poverty line within three months. Or if he had divulged that the heirs to the profits of one corporation — Walmart — had amassed wealth equal to that of the bottom 42 percent of Americans combined. Or if he had explained that the nation would soon face an epidemic of poverty among retirees (a recent study projects that in California, nearly half of retirees will face serious economic hardship).

To his credit, Obama has offered a more candid assessment of America’s march toward the economic precipice — but he did it last month before an audience a fraction of the size of those tuning into last night’s speech. In those earlier remarks, the President stated that “a dangerous and growing inequality and lack of upward mobility…[have] jeopardized middle-class America’s basic bargain — that if you work hard, you have a chance to get ahead. I believe this is the defining challenge of our time: Making sure our economy works for every working American.”

Truer words have seldom been spoken by an occupant of the White House. But if we’re serious about meeting this defining challenge, we’ll need a lot more than a minimum wage of $10 an hour or a call for business executives to voluntarily raise the pay of their employees.

For one, we’ll need a minimum wage that actually lifts people out of poverty, rather than just moving them a little bit further away from abject misery. That’s why the Los Angeles Allliance for a New Economy, for example, is supporting a proposal to increase wages for workers at large hotels in Los Angeles to $15 an hour, as well as to provide paid sick leave. Why large hotels? Because they are tremendously profitable and their jobs can’t be outsourced. Nationally, there are tens of millions of workers employed in industries that fit the same description.

Beyond raising the minimum wage, another change is needed to combat economic inequality – large scale labor organizing. No one expected President Obama to wade into those waters, but we can’t have a meaningful conversation about upward mobility without acknowledging the indispensable role of unions in improving the wages and benefits of workers. Even in its weakened state, the American labor movement today can point to some pretty powerful statistics highlighting the difference between conditions for unionized vs. nonunionized workers. Those represented by a union make, on average, $10,000 more a year than their nonunion counterparts, while 92 percent of unionized workers have access to health care benefits compared to 68 percent of nonunion workers.

The fact is, we will only be tinkering at the margins of our wealth gap unless we find a way to dramatically improve conditions for the vast numbers of people employed in our fastest-growing industries, most of which offer low wages and paltry benefits. Yes, we need to attract the high-paying tech and manufacturing jobs of the future. But we also need to organize to turn the lousy service-sector jobs of today into the good jobs of tomorrow.

With his December speech on inequality and his State of the Union, Obama unlocked a door that now needs to be thrown wide open.

Related Topics:2014 State of the Union Addressincome inequalityPresident Barack Obama
Up Next

Wealth and the Natural Distribution Myth