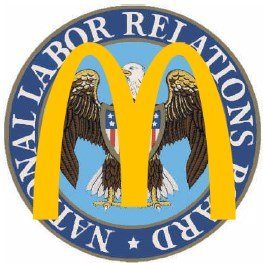 The charges against several McDonald’s franchises were as familiar as items on a Happy Meals menu: “illegally firing, threatening or otherwise penalizing workers for their pro-labor activities,” to quote the New York Times. What was novel about them was the news, first reported Tuesday by Associated Press, that the National Labor Relations Board’s general counsel had found that the fast-food giant is responsible for these crimes when they are committed by the chain’s individual franchise owners. (Of 181 cases that came before the NLRB, 43 were found to have merit, 64 are still pending investigation and the rest were dismissed.)

This is big – very big. If there is any doubt, look no further than the Wall Street Journal’s headline for the story: McDonald’s Ruling Sets Ominous Tone for Franchisers. The reason for this “ominous” forecast is the knowledge that the NLRB’s findings could establish the principle that the corporation and the chain’s franchise owners are “joint employers,” sharing equal responsibility for their employees’ welfare – and equal blame when workers’ rights are trampled on. And it wouldn’t just be McDonald’s on the hook – every fast-food empire from KFC to Taco Bell would be held accountable.

Suddenly, in America’s casino economy, where no one from the gambler to the house is considered responsible for income inequality, the casino itself could find itself liable for low wages, worker harassment and union-busting activities. McDonald’s has tried to distance itself from the disreputable tactics employed on the ground from franchise to franchise.  In several lawsuits, however, McDonald’s workers refreshed the corporate memory with claims such as these, reported by AP:

[Workers] detailed use of company software that monitors the ratio of labor costs as a percentage of sales at its restaurants. When that ratio climbs above a target, workers were forced to wait around before they could clock in, according to one of the suits.

Longtime McDonald’s worker Richard Eiker also recounted how McDonald’s regularly sends representatives to check up on how franchisees are running restaurants, including by standing outside the drive-thru to time how quickly cars go through.

According to the NLRB, “If the parties cannot reach settlement in these cases, complaints will issue and McDonald’s, USA, LLC will be named as a joint employer respondent.”

McDonald’s was quick to respond to the news.

“This is such a radical departure that it should be a concern to business men and women across the country,” McDonald’s senior vice president of human resources told the AP. It should also be a cause for celebration for the men and women who work for them.