You have to hand it to libertarian writer John Tierney. He doesn’t give up easily. His long-winded 1996 article, “Recycling Is Garbage,” allegedly smashed the New York Times Magazine‘s hate-mail record. It covered the same ground as his recent New York Times op-ed, “The Reign of Recycling,” stating: “Recycling may be the most wasteful activity in modern America: a waste of time and money, a waste of human and natural resources.”

Is recycling really “the most wasteful activity in modern America?” That’s quite a charge. (What about all that Kardashian coverage?) But it may be true that it would be cheaper to put all our waste in a hole someplace and forget about it. Assuming, as Tierney does, that there are enough conveniently located holes. It would be even cheaper to use the medieval method of tossing it in the street.

But that’s not the way most people think these days. The consensus is that there are limits, both on the amount of land you can dump in, and the amount of materials you can waste.

In any case, no one seems to have listened to Tierney.

John Tierney blindly insists that landfills are better than recycling.

Recycling has come a long way. Particularly in the city of Los Angeles. In his recent op-ed, Tierney pessimistically states that recycling “is stuck [at] around 34 percent’’ of America’s trash without sourcing his figure. He quotes a former Environmental Protection Agency official who says going beyond that is impractical.

You wonder when the official said that.

According the State of California, the City of L.A. has achieved a landfill diversion rate of 76.4 percent – the highest of any of the nation’s 10 largest cities, and higher than the statewide 75 percent urban goal set for 2020. And it’s not just Los Angeles City. California’s sanitation officials portray recycling as a state success story, with most of its communities recycling 50 percent of the waste that used to go into landfills — with many recycling as much as 65 percent. According to County Sanitation Districts’ official Nick Morell, an onslaught of new technologies has made it easier to recycle food and other difficult wastes.

“We’re really mining the waste stream,” he told Capital & Main. To encourage recycling, the state is raising landfill dumping fees from around a dollar to $4 a ton. (Tierney also seems to favor an even higher “landfill tax.”) “We like the carrot and stick approach,” Morell added. Now that more manufacturers are actually making their products easier to recycle (even a new BMW is designed to be recycled after a few hundred thousand miles) and recycling techniques advance, fewer materials end up in landfills. According to Morell, this has helped L.A. County avoid a landfill shortage.

Tierney seems to allow that only recycling paper and metal can be cost-effective, but he notes that demand for such materials is highly variable. He also accuses “politicians” of pushing the recycling of yucky materials like food wastes, which he claims are cheaper to landfill than to compost.

But composting isn’t the last word here. After April 1, many if not most California businesses, including state agencies, will have to recycle their organic waste. Morell says in addition to composting, the county is introducing reactors that will ferment such waste to yield methane that can fuel electric generators, just as it does at some conventional landfills. Morell also cites wet food waste as a useful water source. Tierney, who writes a New York Times science column, seems ignorant of the fast-moving technology of recycling. Further, while alleging that recycling raw materials costs jobs, he ignores the tens of thousands of new jobs emerging in the recycling industry.

Meanwhile, as Morell notes, recycling is now so well-established that even landfill operators do it themselves to make some extra money and save precious landfill space. That Tierney doesn’t believe such land is precious is something we shall deal with momentarily.

There is obviously room for improvement and there’s no doubt that, in particular, recyclable exports have suffered as importing nations have demanded higher quality products and scrap metal prices have sagged. Yet there’s lots of evidence that recycling just keeps moving ahead, even if it has lately hit a speed bump, with California officials stating that goals of 90 percent recycling are now in reach.

Tierney could not agree less. He maintains that “to public officials, recycling is a question of morality, not cost-benefit analysis.” While to its enthusiasts, he claims, it’s a middle-class religion. He notes that, due to falling oil prices, recycling household waste is much less profitable. No one wants food composting next door, he also claims, citing a case in Delaware. He believes: “[C]ities have been burying garbage for thousands of years and it’s still the easiest and cheapest solution for trash.” He seems personally affronted that, as a 2013 survey found, “82 percent of Americans feel a sense of pride when they recycle.”

Environmentalists argue that there’s a good reason for this.

In their online rebuttal to Tierney, enviros Richard Fuller and Magdalene Sims note that if you bury all the trash, you are burying paper and metals – materials that Tierney agrees produce “more than 90 percent’’ of all the greenhouse benefits of recycling. They claim that most experts agree that $40 a barrel oil prices are certain to soar. And they add: “Today, there are many more people on the earth generating an exponentially greater amount of garbage, including a lot more toxic trash than ever before. Simply putting all that into the ground is not a forward-looking solution.” 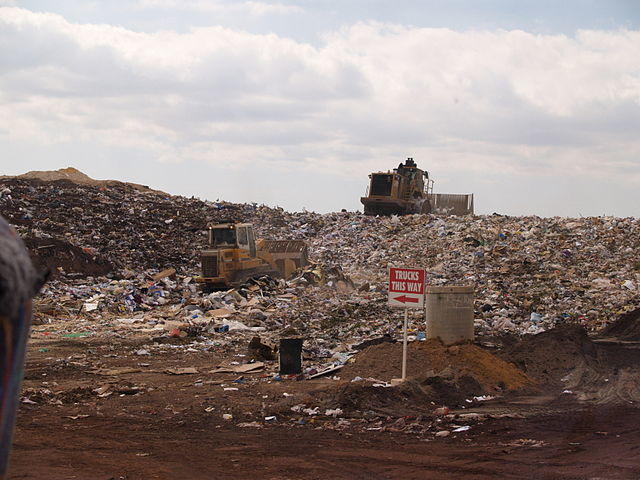 Tierney’s big stumbling block is his blind insistence that landfills are better than recycling. He provides no data for this, adding an unsubstantiated assertion that “[T]hey have been welcomed in rural communities that reap large economic benefits.” He also makes a rather weird generalization about landfill availability. In his 1996 article, he “found that all the trash generated by Americans for the next 1,000 years would fit on one-tenth of one percent of the land available for grazing.’’ According to Department of Agriculture figures, that boils down to about 58,000 acres. Ted Turner has ranches far larger than that.

But this is grazing land that tends to be located hundreds, or even thousands of miles from the large waste-producing cities. So even if the city fathers of Yankton, S.D. agreed to accept urban waste from Seattle 1,500 miles away, it would not pencil out. Assuming Yankton wanted it. I would not assume that. Even counties abutting L.A. County are restricting L.A. dumping.

They are not alone. Maybe it’s my luck, but in nearly 40 years of municipal reporting in small and large communities in New York, New Jersey, Pennsylvania and California, I never heard of any place that “welcomed” landfills. In every community that had one, the key conversation was how to get rid of it or prevent its expansion. These landfill communities’ leaders had been told, as Tierney states, that there was enough greenery around to “buffer residents from the sights and smells.”

The reality was usually a countryside permeated by the reek of unsorted raw garbage arriving in an unending stream of dripping, two-lane-blacktop-busting, diesel-belching, five-ton trucks. What’s more, in the 19 years since Tierney first made his case, much of the “rural” landscape located a drivable distance from refuse-exuding cities like New York and Los Angeles has become densely developed.

So now you have to sell landfills to the affluent, property-value-obsessed burghers of places like Diamond Bar or Morristown, N.J. Or even the not-so-affluent people of Kern County, who have already filed suits against Los Angeles’ waste dumping. L.A. County’s landfill alternative is a tract purchased back in 2000 that is 200 miles away and which would cost twice as much to use as the facilities it would replace.

Jackie Cornejo, who guides the Los Angeles Alliance for a New Economy’s Don’t Waste LA project, which has resulted in laws repurposing the city’s waste flow, explains the landfill health problems untouched by Tierney. (Disclosure: LAANE is a sponsor of Capital & Main.)

“Pollution from landfills and diesel-powered collection vehicles harms public health, increasing hospitalization and leading to missed school and work,” she said. “[It] increases rates of cancer, heart and respiratory diseases, and contributes to premature death.’’

There’s an even more important issue. Landfill gases from organic wastes include methane, much of which escapes to boost global warming far more than do equivalent amounts of carbon dioxide. As Mariel Vilella, Zero Waste Europe’s associate director, recently stated:

“For far too long the climate impact of waste management has been overlooked. Now it’s clear that waste prevention, reuse and recycling are climate change solutions that need to be fully integrated into a low carbon economy.”

Tierney’s thesis reflects the classic right-wing credo that natural resources, whether they are the materials in plastic bottles or the land in which to dump them, are infinite. But as our current pope put it, “[T]he lie that there is an infinite supply of the earth’s goods…leads to the planet being squeezed dry beyond every limit.”

If that’s religious thinking, so be it.

Marc Haefele is a commentator on KPCC’s Off Ramp program and has written for the New York Times and Los Angeles Times.
Related Topics:Don't Waste LArecycling
Up Next