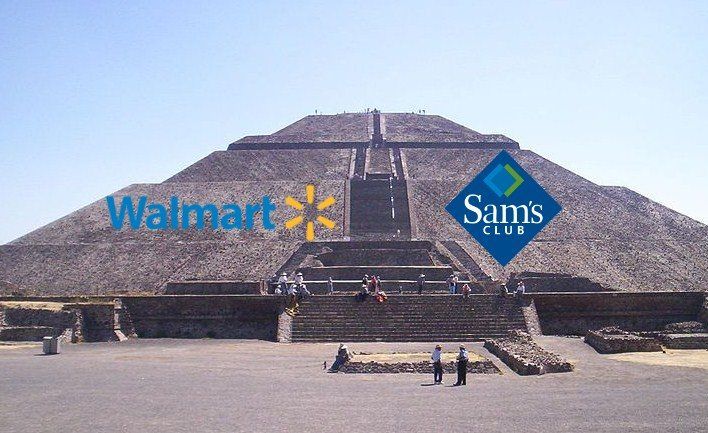 Today The New York Times dropped the other shoe of its investigation into charges of Walmart bribery in Mexico. In some important ways, that second shoe is going to sound even louder than the first. This past April The Times reported how, in 2004, a former Walmart employee became a whistleblower and informed the retail giant’s top brass that systemic bribery had been Walmart de Mexico’s default mode when it came to obtaining building permits and other forms of government cooperation. The executives in Bentonville, Arkansas ordered an internal investigation – but cut it short after the whistleblower’s charges were proved true.

Now The Times’ own investigation, which picked up where Walmart’s was unceremoniously canceled, reveals how the company showered bribes on Mexican officials to overcome zoning prohibitions against building a Walmart supermarket close to that country’s cherished pyramids at Teotihuacán. As Times reporters  David Barstow and Alejandra Xanic von Bertrab write:

The Times’ examination reveals that Walmart de Mexico was not the reluctant victim of a corrupt culture that insisted on bribes as the cost of doing business. Nor did it pay bribes merely to speed up routine approvals. Rather, Walmart de Mexico was an aggressive and creative corrupter, offering large payoffs to get what the law otherwise prohibited. It used bribes to subvert democratic governance — public votes, open debates, transparent procedures. It used bribes to circumvent regulatory safeguards that protect Mexican citizens from unsafe construction. It used bribes to outflank rivals.

But The Times also specifically notes Walmart’s indifference to the pyramids’ cultural value and how the planting of a medium-sized supermarket “in the shadow of Mexico’s most revered cultural landmark” could degrade that landmark. Opposition to the retailer’s plans was swift but fruitless in the face of the corporation’s bribes to pliant bureaucrats:

Protesters decried the very idea of a Walmart so close to a cultural treasure. They contended the town’s traditional public markets would be decimated, its traffic mess made worse. Months of hunger strikes and sit-ins consumed Mexico’s news media.

Those words should resonate with Angelenos, many of whom are opposing Walmart’s plans to parachute a grocery market into Los Angeles’ Chinatown – an act that could also degrade a local historic neighborhood and its small markets.