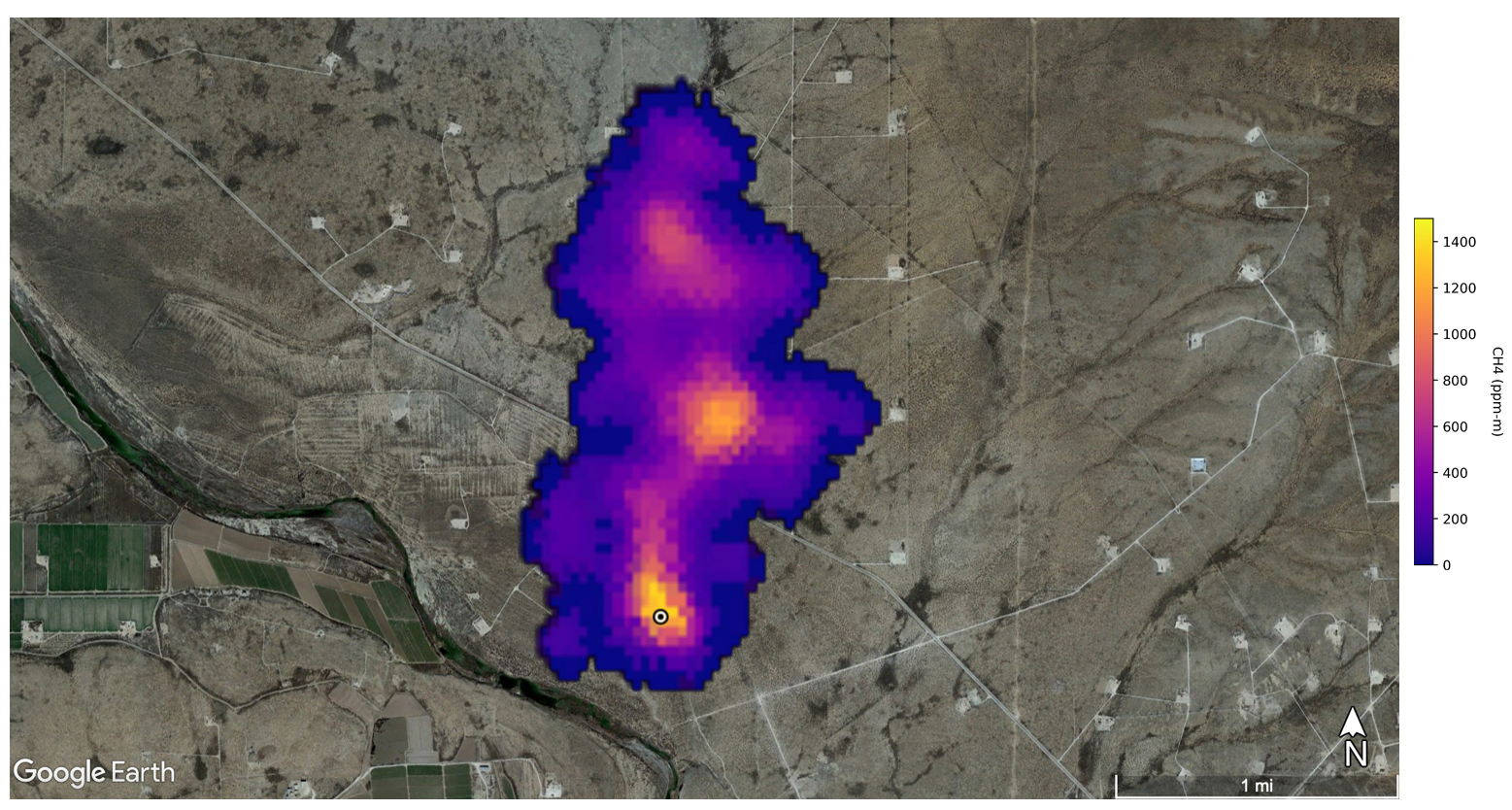 A news release from NASA’s Jet Propulsion Laboratory about its new mineral mapping instrument on the International Space Station sent Oil Conservation Division (OCD) employees scrambling the last week in October. The notification, posted to science aficionados around the world, featured the agency’s new ground-scanning camera and led with an image of a massive methane leak from what appears to be a gas well along the Pecos River, 10 miles southeast of Carlsbad, New Mexico.

In the image, the leaking plume stretches just over two miles due north, a roil of angry reds and blues reflecting different concentrations of the incredibly potent greenhouse gas. Those high concentrations are why the new instrument detected the event, which it wasn’t exactly looking for. NASA’s Earth Surface Mineral Dust Source Investigation — known as EMIT — originally went to space to map minerals in this planet’s deserts, part of an effort to understand how dust from these places affects the global climate. Methane detection is a bonus.

“It’s not formally part of the mission as stated and as funded,” says Andrew K. Thorpe, a research technologist at JPL who works on the project and has studied methane emissions for the past decade. “I’m just leveraging a small portion of the data that’s already being collected as part of this other NASA mission, and mining it for the methane work.”

The new plume near Carlsbad was venting more than 40,300 pounds of methane an hour.

In addition to the picture, NASA documented a one-hour release rate at that site that was far greater than the amount reported at the nearest well site for all of 2022. “OCD immediately reached out to NASA for additional information and began investigating this as a possible major release when it became aware of the information,” says Sidney Hill, spokesperson at the Energy, Minerals and Natural Resources Department, under which OCD operates. He says that OCD inspectors were on the ground and investigating the area in the photo the day after they received the NASA news release.

That notice and the colorful picture from Carlsbad were the first mentions of methane on the project’s website, but finding the climate-warming gas wasn’t totally unexpected. The EMIT instrument on the ISS is an updated version of a similar project that mapped methane emissions across the Permian Basin in recent years. Thorpe says that this earlier project defined sites like the one near Carlsbad as “super emitters” because of the phenomenal amounts of methane they release. In those earlier flights, he says, they detected emissions from wells and other equipment ranging from 22 to 44,000 pounds of methane per hour. The upper end of that range were the “super emitters.”

This new plume near Carlsbad was venting more than 40,300 pounds of methane an hour. Thorpe says, “We’re confident in saying these are large emissions, and they are part of that ‘super emitter’ class.” That class forms a small percentage of the overall number of emissions sites, but combined, their vast volumes contribute 40%-50% of methane emissions for a given area, he says.

“OCD understands that the NASA images indicate the point of estimated highest concentration at the time the image was captured but does not necessarily identify the specific source,” Hill said. “OCD reviewed the entire area around the plume. OCD is still reviewing the results of its on-the-ground investigation.”

Overlaying the NASA image with OCD’s online Oil and Gas Map places the highest methane concentration atop Harroun Com #001, a well operated by Marathon Oil. Thorpe said the reading was made “in the July, August timeframe” but he couldn’t be specific about the date because of policies against releasing individual data points (like a single emission) before releasing a whole data set.

Last year, OCD implemented new, statewide venting and flaring rules to reduce industry’s natural gas emissions to less than 2% of total production by 2026. Producers must report all natural gas that comes out of the ground and account for all venting, flaring and other emissions so that what arrives at a pipeline equals what came out of the well. Failing to report an emission like the one in the NASA image can result in fines of up to $2,500 a day, according to Hill.

Karina Brooks, a communications manager with Marathon Oil, said via an email statement, “Based on our initial review of the data, including our wells in the area, it does not appear that our operations are the source(s) of the methane emissions reflected in the photograph.”

Thorpe said that high methane concentrations like those at the center of the plume indicate the source of a leak, but “that being said, there is a little bit of ambiguity.” The pixel size of the instrument’s camera records squares 60 feet across, so it can’t distinguish locations smaller than that. But the next closest well or other equipment is over 2,200 feet away from the plume’s hot spot and the Marathon well.

The release rate of 40,300 pounds of methane per hour documented by NASA is 5% more than the total venting reported to the state from Marathon’s well for all of 2022 to date. It’s an amount roughly equal to the greenhouse gas emissions of 100 cars driven for a year — being released into the atmosphere every hour.

“We will cooperate with the state agency to investigate the matter, which limits our ability to address [this] inquiry in detail at this time,” Brooks said.

The EPA has indicated it may soon declare the Permian Basin an ozone nonattainment zone under the Clean Air Act, which would require stricter controls on oil and gas field emissions.

Thorpe said the image is a snapshot in time due to the nature of ISS’s orbit, which is offset several degrees each time it races around the globe. It circles the Earth about 16 times a day, but because of the offset, it takes three days to fly over the same spot.

“I think it’s terrifying it’s that close,” said Kayley Shoup, an organizer with the environmental and community group Citizens Caring for the Future. She lives in Carlsbad and worries about the associated gases that leak with methane and contribute to ozone and smog in the region and lead to respiratory problems. The EPA has indicated it may soon declare the Permian Basin an ozone nonattainment zone under the Clean Air Act, which would require stricter controls on oil and gas field emissions.

Hill said that OCD is investigating the release to find the source, but could not comment further on a case that is still under review.

And perhaps OCD should prepare for similar investigations in the future. Thorpe says that methane information from EMIT and other dedicated methane-tracking satellites that are scheduled to launch over the next two years will sharply increase the world’s ability to find, pinpoint and measure oil and gas methane emissions. “There’s going to be more examples, and it’s going to be shared more frequently,“ he said.

“I think it’s in everyone’s best interest to know about it,” he said. “You give people data and hopefully they’ll use it accordingly.”

Thorpe said that JPL plans to have a public data portal up and running early next year with all of the mission data. Shoup said she looks forward to having a new, online resource to document large methane emissions in her backyard. “That is really such wonderful news,” she said.