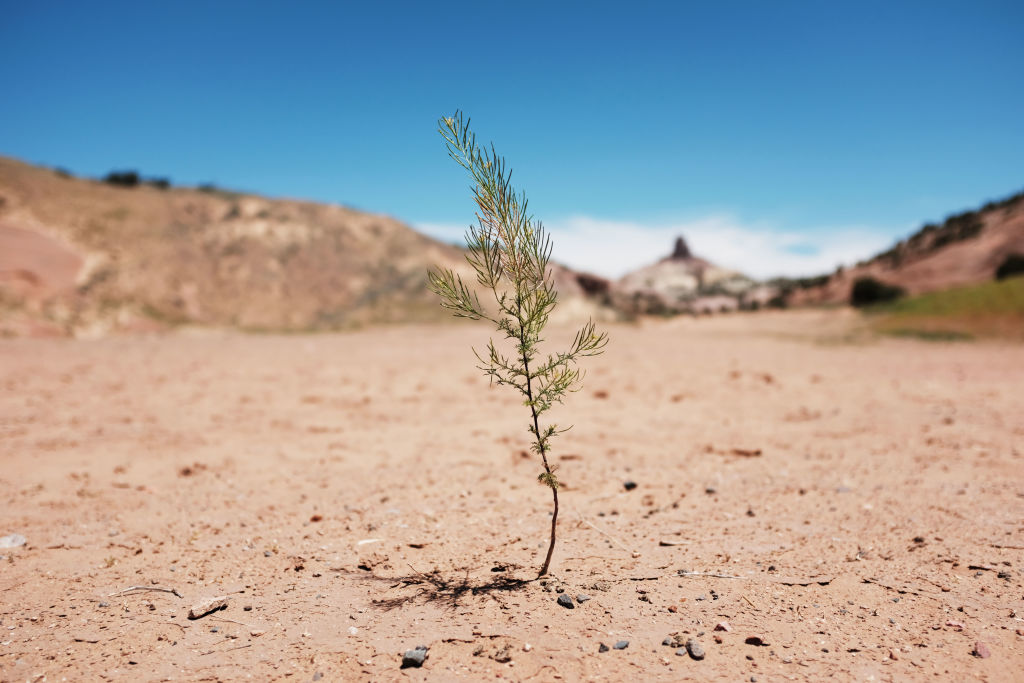 In the headwaters of the Rio Grande, last winter’s snowpack hit close to the historical norm. Yet, in the spring, summer and fall of 2020, the state’s largest river dried for more than 40 miles. Even after water managers ended the irrigation season early, and farmers stopped drawing water from the river for fields and orchards, the Rio Grande dropped to record lows through the city of Albuquerque — nearly drying up entirely in October.

In the coming years, as human-caused warming continues, New Mexicans will face even more dire conditions. And while some New Mexico lawmakers plan to introduce bills on solar energy, prescribed fire and statewide greenhouse gas reductions in the coming legislative session, the physical world — from the forests to the farm fields — is changing at a pace that far exceeds political action.

New Mexico is said to be staring down a 70% to 100% reduction in snowpack that feeds the state’s two largest rivers — the Rio Grande and Pecos — between 2070 and the end of the century.

This year, the U.S. Southwest is facing La Niña conditions, which will bring a drier than normal winter. Already, stream flows are below normal across the state and many reservoirs are nearly tapped out. In southern New Mexico, managers with the Elephant Butte Irrigation District have already warned farmers they should brace for a “zero allotment” of water in 2021.

An expert on water issues, state Rep. Melanie Stansbury (D-Albuquerque) is leading the charge on climate change in the legislature. And during the 2021 session, she is introducing the Climate Resiliency and Security Act.

“We’re already seeing the signs of climate change in our water supplies,” says Stansbury, who worked on Capitol Hill and for the federal Office of Management and Budget before returning home to New Mexico a few years ago and running for office. (Stansbury is also planning a run for U.S. Congress, to replace Rep. Deb Haaland, whom the Biden administration has nominated as Secretary of the U.S. Department of the Interior.)

And things are going to get worse.

Recently briefed on a draft federal report, Stansbury says New Mexico is staring down a 70% to 100% reduction in snowpack that feeds the state’s two largest rivers — the Rio Grande and Pecos — between 2070 and the end of the century. “Every tiny rural community, every farm in our state is vulnerable to climate change,” she says. “And if we don’t institutionalize helping our communities, we’re going to be in a lot of trouble.”

Statewide attention to climate has emerged only in fits and starts.

If passed, the bill would codify in state statute climate-related targets set by Gov. Michelle Lujan Grisham to reduce greenhouse gas emissions to at least 45% below 2005 levels by 2030. The bill would also expand that goal to net-zero emissions by 2050.

Climate policies must be durable, she says. When implemented by executive order, they’re too easily undone by the next administration. That’s clear to see on the federal level — and also in New Mexico.

Statewide attention to climate change has emerged only in fits and starts. Between 2003 and 2011, Gov. Bill Richardson moved the needle on renewable energy and initiated work on climate change within some state agencies.

But during the eight years that followed, Gov. Susana Martinez halted all action on climate change, rolled back environmental rules, and appointed industry-friendly leaders to the New Mexico Environment Department and the New Mexico Energy, Minerals and Natural Resources Department.

Passing the Climate Resiliency bill would ensure that New Mexico’s emission reduction targets, programs and funding mechanisms continue into the future, no matter who is governor.

During Martinez’s administration, many state legislators even stopped introducing bills related to renewable energy or water planning altogether — knowing the governor wouldn’t lift a pen to sign them.

In 2007, for example, legislators introduced 24 bills and memorials related to climate change. In comparison, a total of 22 bills even mention “climate change” in the years 2011 through 2017.

Passing the Climate Resiliency bill would ensure that those emission reduction targets, programs and funding mechanisms continue into the future, no matter who is governor.

“Right now, we have a very short timeline, with some really huge obstacles,” says Artemisio Romero y Carver, a high school senior in Santa Fe and a member of the steering committee for YUCCA, or Youth United for Climate Crisis Action.

As a youth group, YUCCA can’t deliver votes on Election Day. But their voices — and their direct action work to hold politicians accountable — lend an urgency to an issue like climate change that can be missing from policy conversations about the future. Children and teens will suffer the most from the consequences of climate change; as warming accelerates and impacts deepen, they’ll have fewer and fewer options for mitigation and adaptation as water supplies shrink, coastal or desert regions become uninhabitable and food insecurity increases.

“We have less than ten years to change the way we use energy and fundamentally change economies if the human species is going to continue past 2050,” says Romero y Carver. (In 2019, the United Nations warned that only 11 years remained to drastically reduce greenhouse gas emissions and restructure energy systems to “avert catastrophe” on climate change.)

As renewables become increasingly more affordable, and the electricity and transportation sectors phase out fossil fuels, New Mexico needs to prepare for the loss of oil and gas revenue.

Even if New Mexico follows through on plans to cut greenhouse gas emissions by 2030 or 2050, that’s too late, he says, pointing out that lags behind the timeline for actions that scientists say can avert the worst impacts of climate change. “We support climate bills that call for this transition within the timeline that is set by science,” he says. “That is the only timeline we should consider.”

Not only are New Mexico’s communities, waters and landscapes affected by the release of greenhouse gases into the atmosphere, he says, but New Mexicans also play a global role in causing climate change.

The Permian Basin, which straddles the Texas–New Mexico border, is one of the world’s largest oil fields. Companies are developing the field at a dizzying pace, and selling the oil as quickly and cheaply as possible. Despite a dip in production last spring, drilling has ramped back up in the basin. In December 2020, companies were pulling out more than 4 million barrels of oil and 16,901 million cubic feet of natural gas daily — even though prices remained low for both products.

New Mexico’s development of fossil fuels, like in the Permian, is contributing to “global ecological collapse,” Romero y Carver says, and New Mexicans need to acknowledge that reality.

Often, state officials defer responsibility, pointing out that federal policy is necessary to control development or emissions — or that states can’t accomplish much on their own. “It’s not a federal problem,” Romero y Carver says. “It’s an issue of state politics, and it will determine the fate of our species.”

Like other western state forests, New Mexico’s are overly dense, thanks to more than a century of fire suppression and a U.S. Forest Service that can’t keep pace with the thinning and prescribed fire projects necessary to tame doghair thickets and remove hundreds of thousands of acres of dead trees killed off by combinations of drought, warming and insect infestations. Not only that, but the forests are already parched — and will become tinderboxes by early spring if the La Niña forecast holds.

Rep. Matthew McQueen (D-Galisteo) is introducing a bill focused on prescribed fire and restoring the long-term health of the state’s forests. It’s just one part of the climate solution, he says.

New Mexico also needs to diversify its economy, steering away from reliance on the oil and gas industry, a leading contributor to climate change, he adds. That’s also a boom-and-bust industry — whose bust, McQueen says, will eventually be permanent.

As renewables become increasingly more affordable, and the electricity and transportation sectors phase out fossil fuels, New Mexico needs to prepare for the loss of oil and gas revenue.

“Economic diversification is imperative for us,” McQueen says. “But it’s not a top-down problem. It’s opportunistic.” The legislature can’t change the way business is done in the state, but it can encourage new or emerging industries — as it did with the film industry more than a decade ago.

All of that takes time, as does building momentum to pass climate-related legislation, even if voters want their leaders to take action.

“For a long time, it’s been very difficult to get progressive environmental legislation passed,” says Jon Goldstein, director of regulatory and legislative affairs for the Environmental Defense Fund.

“A number of the new faces coming in, particularly to the state Senate, are exciting to see,” he says. “I think people are increasingly aware of that clock and feeling like this is something that we need to take care of, not just for us, but for our kids.” Goldstein points to a 2020 Majority Institute poll that showed “strong support for ambitious policies” to limit climate pollution in “battleground legislative districts” ahead of last year’s election. Not every progressive candidate won in New Mexico — but most did. And all of the legislators in those districts have a clear mandate for action on climate change.

“There’s a new infusion of leadership and a desire for action on issues like climate — it feels like a real watershed,” says Goldstein, who also served in the administration of former Gov. Richardson.

During the 2021 legislative session, YUCCA activists like Romero y Carver will keep working with other conservation and racial justice organizations. One of their main priorities is to encourage policies that will end the state’s dependency on fossil fuels and implement plans to build a transition economy, Romero y Carver says. “We want to make sure that government is responding to the climate crisis instead of solely industry demands.”

Cracking apart the ties between state government and the fossil fuel industry is daunting. Romero y Carver says it has been “terrifying” to witness the power that industry executives and lobbyists wield in the state.

“Initially when I looked at it, I felt desperate and defeated,” he says. “But I don’t think there is anything more powerful than people united in community. As powerful as the oil and gas industry is, if we’re organized, and loud, and [if we] say what we want and make our public servants act as servants to the public, we can stand a chance.”

But there’s not much time.

Even if politicians act on the timeline to cut greenhouse gas emissions that the United Nations warned was imperative, it won’t stop climate change — only help the world avoid the worst impacts.

“We’re not ending climate change, just mitigating disaster,” says the 17-year-old. “But we have to act like our lives depend on it. Because they do.”

Related Topics:Climate ChangeFeaturedNew Mexico
Up Next

Introducing “The Slick California”: How the Oil and Gas Industry Influences Climate Policy in the Golden State