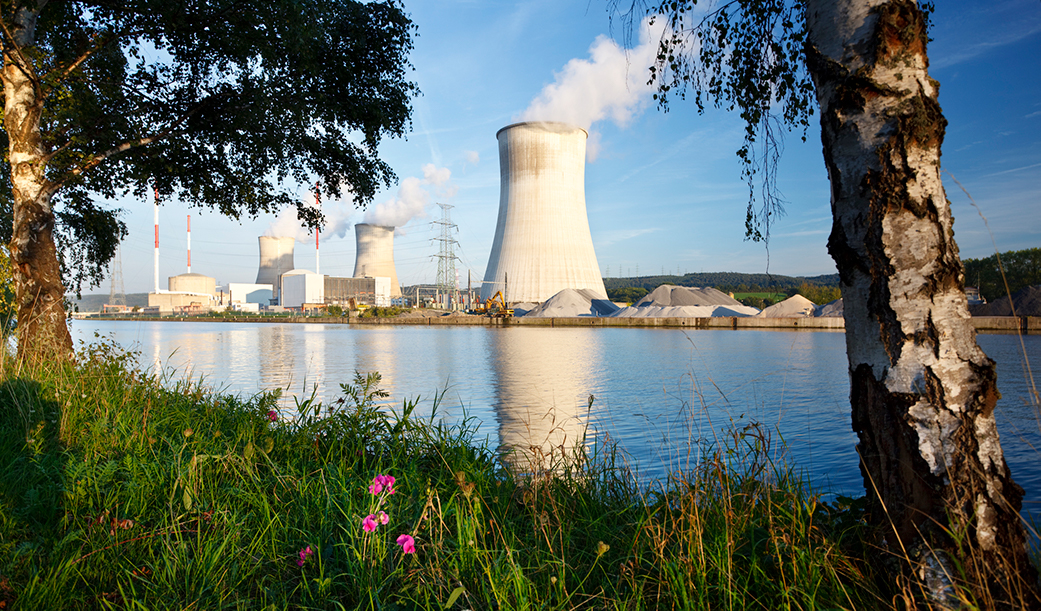 If you want to engage a conservative on the climate crisis, try talking about advanced small modular nuclear reactors. SMRs, as they’re called, are compact and supposedly safer versions of the more familiar behemoths that supply 20 percent of the nation’s electricity – electricity that, in purely greenhouse-gas terms, is about as clean as it comes. Nuclear energy generation emits only a miniscule fraction of the greenhouse gases that coal- or gas-fired generation does. In some cases, nuclear even beats solar.

Which is why, as 2020 shapes up to take its place among the three hottest years on record, with wildfires ripping through the West and rainstorms inundating the South, politicians from former Vice President Biden to California Republican Rep. Kevin McCarthy have seen fit to include nuclear power in their clean-energy plans.

“There’s more bipartisan support for nuclear power today than I have ever seen.”

“There’s more bipartisan support for nuclear power today than I have ever seen,” Edwin Lyman, director of nuclear power safety at the Union of Concerned Scientists, told me.

Biden’s “Build Back Better” proposal for cutting emissions while stimulating the economy mentions “advanced nuclear” (read: SMRs); so does the early draft of the Democratic Party’s 2020 platform and the Climate Crisis Action Plan drawn up in the House of Representatives.

A bill proposed in Congress by Virginia Democrat Rep. Elaine Luria, the Nuclear Energy Leadership Act, calls for the construction of two advanced reactors before the end of 2025 (a goal Lyman considers “totally unrealistic”).

Even Alexandria Ocasio-Cortez, who has called for a complete shutdown of New York’s Indian Point nuclear power plant, doesn’t rule out advanced nuclear – at least not publicly, despite other progressives’ objections. “One plant built decades ago is not emblematic of the technology that we have today,” she told Morning Consult.

To be clear, we don’t quite have that technology today. Nucleoeléctrica Argentina began construction on a small modular reactor northwest of Buenos Aires in 2014, but it’s still far from completion. Russia has two small reactors floating in the Arctic that began commercial operation in May. (Anti-nuclear activists call the plant “Chernobyl on Ice.”) NuScale, a company based in Portland, Oregon, plans to begin construction on an operational fleet of SMRs within the next few years at Idaho National Laboratory.

On paper, the technology appears to be the solution to a lot of the problems that have plagued nuclear power in the past.

Otherwise, the technology exists only on paper, where it appears to be the solution to a lot of the problems that have plagued nuclear power in the past. Small modular reactors are less complex than their larger counterparts, advocates say, and therefore easier and cheaper to build. Some versions don’t rely entirely on water for cooling, so they’re less prone to meltdowns like the one that happened at the Fukushima Daiichi plant in 2011, and less vulnerable to the dangers of sea-level rise and climate-driven flooding. Others don’t need water at all. “They’re great options for places that aren’t on a large body of water,” Jessica Lovering, a doctoral student in energy policy at Carnegie Mellon University, said.

Fleets of small reactors can be used to balance weather-dependent renewables like solar and wind on the grid, Lovering said. “If you have 12 individual reactors, it’s a lot easier to ramp up just one of them at a time.” On a sunny but not-too-hot day, when demand flags and supply is abundant, you can shut off one or two units without powering down the entire plant. Lovering is also researching “micro-reactors” that can supply power to remote areas. “Their first applications would be pretty niche and off-grid,” she said, “but that’s exactly where solar started.”

If generating watts with nuclear power, in the words of energy sage Amory Lovins, is “like cutting butter with a chainsaw,” the small reactors are more like steak knives: A little more muscle than one might need, perhaps, but not ridiculously so. You can, after all, still spread butter on your toast with a steak knife. But you also might get cut.

Edwin Lyman has lived through a few promised nuclear renaissances in his lifetime. “There’s always a lot of enthusiasm, a lot of buzz,” he said, “until buyers have to confront the price tag. Then everyone apparently forgets and we’re back to where we started.” He sees no reason why this year’s nuclear ballyhoo would be any different. What’s true of the large reactors is likely true of the small ones: They’re just too expensive.

Nuclear power plants unfailingly take more time and cost more to build than the buyer had budgeted for, and not by a trivial margin.

“Utilities aren’t as concerned with the cost of the plant itself as they are with the lifecycle costs of the electricity it’s going to produce,” Lyman explained. Nuclear power plants, regardless of size, require enormous resources to build, license and deploy. “The cost of taking a paper design to the point where it can be a commercial, affordable nuclear reactor is a major investment of many billions of dollars and many years,” Lyman said. And everything has to be done perfectly. Solar done wrong might injure an installer, but “with nuclear, design or construction errors, if not caught and fixed, could take down a neighborhood.” Nuclear power plants unfailingly take more time and cost more to build than the buyer had budgeted for, and not by a trivial margin.

That’s one of the reasons utilities are so reluctant to invest in new nuclear reactors. (Another is that there’s still no place in the U.S. to dispose of radioactive spent fuel, but that’s a different story). An expansion of the Vogtle nuclear plant in Georgia that began in 2009 with a $14 billion budget will cost twice that much to complete, analysts say. And it’s nowhere even close.

There’s no evidence yet that smaller reactors will cost less per unit of energy produced than the large ones do, Lyman said. And without that reassurance, he worries that, in an effort to build more quickly and cheaply to solve the climate problem, manufacturers will sacrifice safety.

NuScale has already asked the U.S. Nuclear Regulatory Commission, which reviews and licenses nuclear facilities, to relax certain regulations regarding evacuation areas and radiation containment structures. Lyman thinks that’s a mistake. “To the extent there is a safety benefit [to these new designs] it’s being squandered by this attempt to weaken other standards,” he said. “If you try to skip critical steps just to rush things along that’s worse than doing nothing. You may end up with something less safe than what we have now.”

Lovering got interested in nuclear energy back in 2008, while she was a graduate student in environmental studies at the University of Colorado, Boulder. “I was doing some basic modeling on how to decarbonize [electricity generation],” she said, “and I noticed that nuclear was a big share of low-carbon electricity in a lot of countries.” Her classes were heavily focused on wind and solar. When it came to nuclear, “We just didn’t talk about it at all.”

She later developed and taught a graduate seminar on nuclear power for interdisciplinary grad students while finishing her master’s in environmental science and astrophysics. She found nuclear power “fascinating,” she said, “not because it’s perfect, but because we need it, and it has problems.”

The way Lovering sees it, those problems largely have to do with “the way the industry is run, coming out of the military industrial complex, without a lot of concerns about cost constraints in the early days.” NuScale “was spun out of Oregon State University,” she said. “It didn’t come out of a defense contractor. And I think that makes them very different.”

Now she believes she can persuade progressives to open their minds to the benefits of nuclear energy. With Suzanne Hobbs Baker, the creative director of the Fastest Path to Zero climate initiative at the University of Michigan, Lovering has founded a nonprofit, the Good Energy Collective, to do just that. Young climate activists “aren’t necessarily opposed to nuclear a priori, but they don’t have people in-house working on nuclear policy,” she said. “We wanted to make a space to figure out how nuclear fits their agenda.”

Lyman isn’t saying she and her cohort shouldn’t try to do that. He only warns that “the current political and policy environment, where we have to solve climate yesterday and anything that stands in the way is bad,” bodes ill for nuclear safety.

“Policymakers can’t do this quickly without accepting too much risk,” he said. “This isn’t a PR battle. You have to be patient, you have to have sustained investment over time, and you have to go back to the fundamentals of how we regulate safe nuclear power,” he said. Otherwise the current nuclear renaissance will wither before it starts, or end in an accident that will sour the public on nuclear power for good.

“It’s in the industry’s interest to make sure they don’t make a mistake,” Lyman said. “But the way I see it, they’re all rushing headlong into a future of mistakes.”