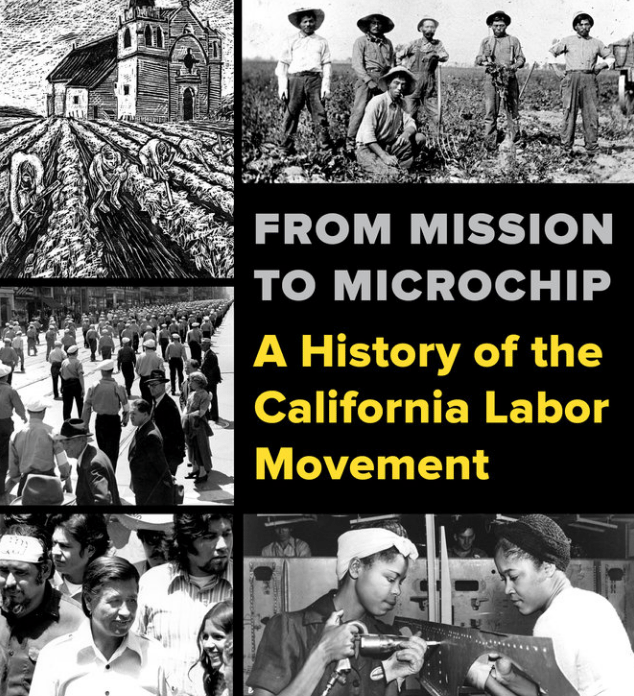 “My impulse was to bring history up to the present,” says Fred Glass about his new book, From Mission to Microchip: A History of the California Labor Movement (University of California Press).

The volume embraces more than California’s rich labor organizing history — it examines the nature of work, the forces that manage our work lives, who benefits from labor and how it all shapes our present notions of what work is about. It’s a lively, if lengthy read that hits those themes throughout in ways that resonate with the 21st century’s disruptive gig economy of Uber and Lyft drivers.

It asks and answers: Who the workers were who built California—indigenous, Chinese, Mexicans, African-American and Irish — what their lives were like, what inequalities and frictions existed.

And it addresses the questions facing California as we are embroiled in the 2016 election—what dynamics, collaborations and tactics have transformed the Golden State into arguably the most progressive one in the union when it comes to employment and living standards policies?

“Labor history doesn’t stop,” Glass tells Capital & Main during an interview in the offices of the Los Angeles Alliance for a New Economy. “Some of the most important and relevant lessons from California for the United States have just occurred. Just as other states around the country are disastrous laboratory experiments in ‘small government’ and anti-tax ideology. California has moved in the other direction.” Glass is referring to Wisconsin’s attacks on public-sector unions, despite its long progressive history as the state that first granted collective bargaining to public employees.

Glass is communications director for the California Federation of Teachers (CFT) and teaches Labor and Community Studies at City College of San Francisco. (Disclosure: CFT is a financial supporter of Capital & Main.) When he first taught American labor history, then local San Francisco labor history, Glass says, he realized that there was a California story he didn’t know much about.

“The book came out of not having a book to turn to for that class,” he says. The last published California overview history had left off in the 1960s and was slightly updated in the 1970s. “Our understanding of that history has changed.”

“There’s a dominant narrative in society that devalues work and working people.”

An opening chapter sets the framework with a description of the work lives of California’s indigenous peoples prior to the European incursion in the late 18th century. “The purpose of work was to provide for life,” Glass writes. If it took a few weeks to build a canoe, the time didn’t matter. The canoe was the essential product, the craft you used to fish to feed the family and provide for the rest of life—so it was worthwhile to get it right.

Spanish conquerors imposed the mission system and the clock. The subjugated indigenous people who worked the fields and produced goods for the missions faced harsh consequences for breaking the rules and attempts to escape could be fatal.

“A constant for the labor movement has been the attempt to [better] manage through collective action individual workers’ time,” Glass says.

Another theme in the book that resonates in 21st century working life might be called “mining the miners.” California’s history is thought of as a series of gold rushes, Glass says—the initial 1849 California Gold Rush “was followed by bonanza wheat farms, oil, movies, the post-war jobs boom, Silicon Valley software startups.” (The 21st century parallel of “mining the miners”—a term Glass emphasizes he did not invent –“would be Facebook, which mines the data of its users for commercial profit. It’s even called that — data mining.”)

The ‘49 Gold Rush kicked off the industrial economy. Railroads helped build California and the “Big Four” business tycoons—Leland Stanford, Collis Huntington, Mark Hopkins and Charles Crocker – are always credited with building the Central Pacific Railroad, although, of course, it was Chinese and Irish immigrant laborers who actually swung the pick axes and pushed the shovels.

“Their money employed the people who built the railroads,” Glass notes of the tycoons, who, he adds, “came to their money as failed Gold Rush miners. They built their initial fortunes that way,” by mining the miners – selling food, fuel and housing to miners and prospectors.

That the Big Four get virtually sole credit for building the railroads is part of the larger framework through which we view work. “There’s a dominant narrative in the society that devalues work and working people,” Glass says.

From Mission to Microchip covers the racial history of California labor organizing as well, focusing on the ways businesses brought in Chinese and African-American workers to work under far lower (and cheaper) standards than did Irish workers—and the ways the unions responded. In the 1870s, for example, leaders of the Workingmen’s Party of California, which included many Irish immigrants,  blamed San Francisco’s super-rich for using Chinese labor to squeeze the working class that was then building the City by the Bay. Denis Kearney was the party’s leading xenophobic rabble-rouser. But WPC leader Frank Roney, another Irish immigrant, denounced the Chinese exclusion laws that his own party championed.

“In California that organizing has made the difference between falling to the same average union density as the rest of the country, which is around 11 percent, [and the] 16, 17 percent we’re still at.”

Glass calls Justice for Janitors in Los Angeles, which took on what was largely a contract industry, “the first systematic embrace of immigrant labor rights.” The J4J movement, organized by the Service Employees International Union in the 1990s, rolled out of Los Angeles into other cities.

“The toolbox was being put together right from the beginning,” says Glass. “These were people who came from other places and they carried those traditions with them. They didn’t invent it all here but they pulled it together here in different ways.”

Another impetus for Glass’ book was his work with the statewide Reclaim California’s Future coalition, in the run-up to the 2012 elections in support of Proposition 30. That successful ballot measure raised taxes on California’s top two percent of income earners in order to restore school budgets and public services that had been slashed by recession-era budgets.

And now, as November approaches, Glass says the next step is a follow-through on the 2012 effort to reform California tax policy by extending the expiring Proposition 30 to raise $8 billion: “It’s a temporary tax, it saved the public sector in California in 2012 when passed, it changed the narrative about California voters who previously were believed to be bullet-proof against raising taxes.”

Related Topics:California Labor History
Up Next