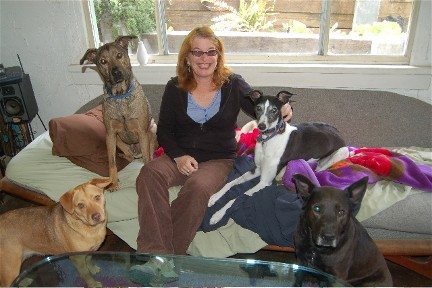 My dog sitter, Lezle Stein, is on fire.  Let me be more precise.  Lezle is a dog trainer, a shelter volunteer, animal advocate and a small business owner.   She’s one of many who have been dealt a blow by this so-called recovery.  When I drop off my whippet in the morning, we often check in.  Lately, it’s been gloomy.  There’s not been a class in weeks for Lezle to teach.  She’s digging into her retirement savings.  She’s looking for work to supplement her business income.

Suddenly, a week or two ago, she got a new lease on life.  She had discovered Occupy L.A..  Her Facebook page lit up.  She was watching movies about the labor movement.  “I’m going to invite you to a meeting,” she warned one evening when I called to make arrangements for a dog drop-off.

So I went down to L.A. City Hall last Thursday to see what it was all about.  I found a well-organized encampment and young people of all backgrounds.  There was a makeshift library that included offerings from Virginia Woolf to Malcolm X, a table covered with empty serving dishes that had held lunch for a crowd, and donated provisions that included toothbrushes, socks, and umbrellas.  (It had rained the night before).

A woman in her sixties welcomed me and walked me through the encampment.  Like Lezle, she had been energized.  She spoke excitedly of a recent City Council motion in support of the protest, co-sponsored by Los Angeles City Councilmen Bill Rosendahl and Richard Alarcon and signed by seven of the 15 council members.  She hadn’t wanted to leave the encampment so had a friend meet her at a downtown street corner with the warm clothes she needed to get her through the rainy night.  I stayed for a communications training, conducted by two young men with the help of a megaphone, before the assembled protesters did the escalating, United Farm Workers clap and left for a demonstration at a bank.  I left for my office.

When people say that the Depression shaped a generation, they are usually referring to the hardships of joblessness and breadlines.  But that generation was also shaped by new forms of solidarity — rent parties, occupied auto plants and Hoovervilles.  In each of these instances, people who felt alone and at the mercy of external forces discovered fellowship and mutual support, as well as righteous anger.

It’s too early to say what all these protests will add up to.  But they are bringing together people who might not have known they had anything in common.  They are reminding us that irresponsible banking practices and inadequate regulations got us into this mess and that we have shameful levels of inequality in the country.  And, hopefully, they are lighting a fire under leaders who often want to do the right thing, but need backup.

And the especially good news in all this, according to Lezle, is that (at least in L.A.) the revolution is pet friendly.  Lezle reports that she and her dog Lucie found many like-minded, if sleeping, canines on a recent City Hall trip.