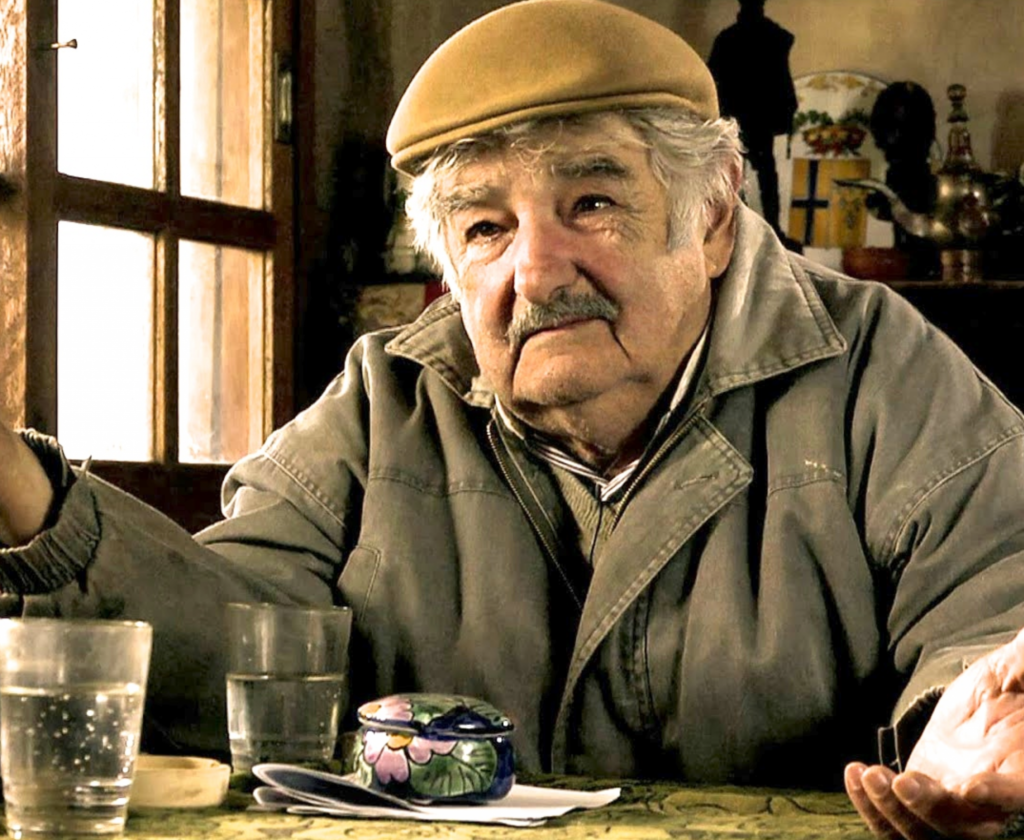 I turned off onto a long dirt road about 15 miles outside of Montevideo, Uruguay and drove towards a wooden guard shack that stood across from a small farmhouse hidden by a long row of trees. Usually, if you want to meet a country’s president – or even ex-president – you have to fight through layers of bureaucracy, confirm that you are not a threat and have a very good rationale for being considered worthy to talk to. But in the case of Uruguay’s former head of state, José “Pepe” Mujica, you simply find your way to his home – something that apparently 30 or 40 people do every day.

Some come to ask for help – after serving four years as president of his country, Mujica is still a powerful member of the Uruguayan senate – some to offer advice, while others, as his friendly guard Turco (the Turk) laughed, are “just hippies . . . ”

I had dropped in the day before hoping for a meeting, but Mujica was busy being interviewed by a Brazilian filmmaker who was making a documentary about Volkswagen Beetles. Mujica famously drove an old battered one to his presidential office every day, forgoing the presidential limousine. The Beetle is still parked in a wooden garage behind his small farmhouse.

Under Mujica, rural and domestic workers finally obtained an eight-hour workday and a pension.

Mujica became famous – and beloved in some circles – for the modest lifestyle he maintained while president. He jettisoned an opulent palace to remain in his modest farmhouse like a “regular” Uruguayan. He donated most of his presidential salary to charity.

Mujica’s personal behavior reminded people that citizens in democratic republics do not bend their knees, doff their hats or engage in other forms of self-abasement towards the people they elect to their highest offices.

In his youth, Mujica was one of the leaders of the violent Tupamaros rebel group that fought the Uruguayan government and military dictatorship in the 1960s and early 1970s. He was captured and imprisoned for 14 years, spending 10 of those years in solitary confinement.

Similar to Nelson Mandela, Mujica came out of prison, in 1985, not embittered but ready to make a political contribution to his country. He became leader of the Frente Amplio (Broad Front) political party – a united grouping of the left – and was elected president of the country and sworn into office in 2010. His only term as president ended in 2015.

Pepe, who is starting a trade school at his farm to teach agricultural techniques to young people, was not interested in discussing the “tourist” issues related to his down-to-earth style. He pointed out proudly that during his term, after 100 years of struggle, rural and domestic workers finally obtained an eight-hour workday and a pension. The nature of power, he said, was like a slippery fish. Sometimes you can hold on to part of it, but more often it escapes even the grasp of presidents.

We sat in the guard shack and talked for an hour about inequality, the importance of learning to work with your hands and about his meetings with President Obama. The former president was philosophical and practical, comfortable with exploring the more abstract reaches of political philosophy while remaining a political animal attuned to the cut and thrust of everyday politics. Despite his revolutionary background, he believes that the values of the left and right are an indelible part of our human condition, contrasting beliefs that will never be expunged from society by one side or the other.

While we talked, Turco drank mate – an herbal drink imbibed through a metal straw that is the Uruguayan national beverage — and stood near the door, listening to our conversation while watching for anyone who might approach and request a meeting. His small pistol lay wrapped in a towel on the desk behind us, a reminder that while Uruguayans, unlike Americans, are not inundated with guns, there are crazy people in every society. Before the interview began, I asked him to turn the barrel away from us.

The Cost of Private Prisons Is a Crime