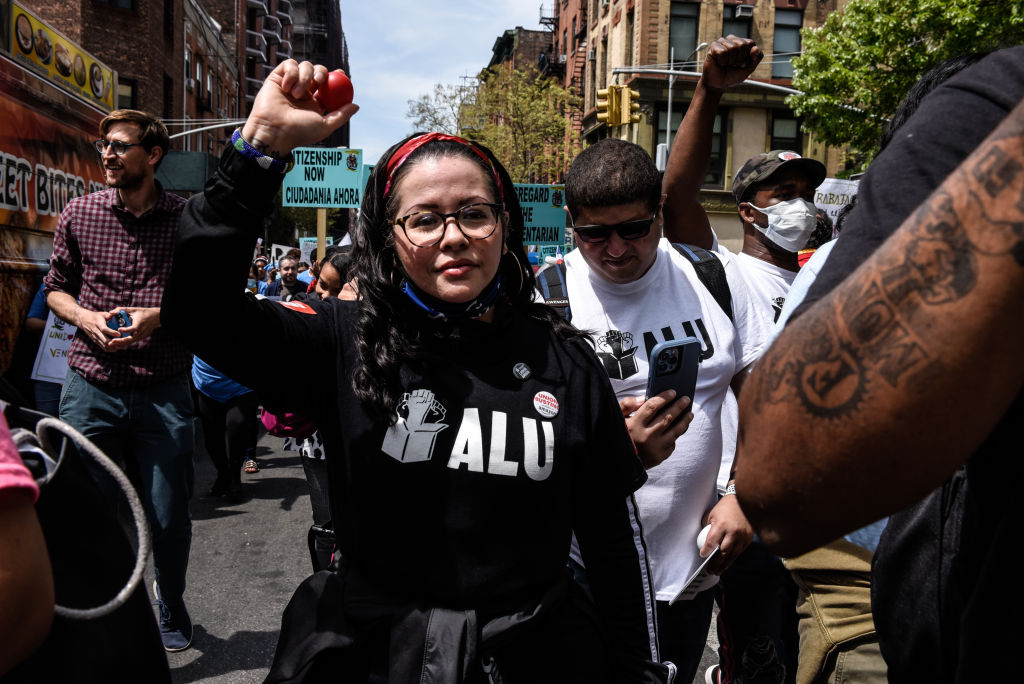 Amazon workers participate in a May Day rally in Manhattan on May 1 in New York City. Photo: Stephanie Keith/Getty Images.

In the last of our series of discussions about the impact of neoliberalism, Capital & Main spoke to Valerie Wilson, director of the Economic Policy Institute’s Program on Race, Ethnicity and the Economy. Wilson, who holds a doctorate in economics from the University of North Carolina, has conducted research and written extensively on how African Americans and other communities of color have borne the brunt of economic downturns, never achieving equal treatment or opportunity.

Wilson is particularly concerned about how right-wing politicians use a “zero sum” way of framing economic conditions to divide us. In this paradigm, if, for instance, African Americans make economic and social gains, then those advances can only come at the expense of white workers. It is this kind of insidious and poisonous logic that Wilson’s economic research has consistently debunked. She spoke to Capital & Main from her home in Washington, D.C.

Capital & Main: We have been discussing the term “neoliberalism” in these conversations but most readers may relate more to the concepts of economic deregulation, unfair global trade laws and the free flow of capital and technology around the world. Talk about those dynamics in relation to your research. 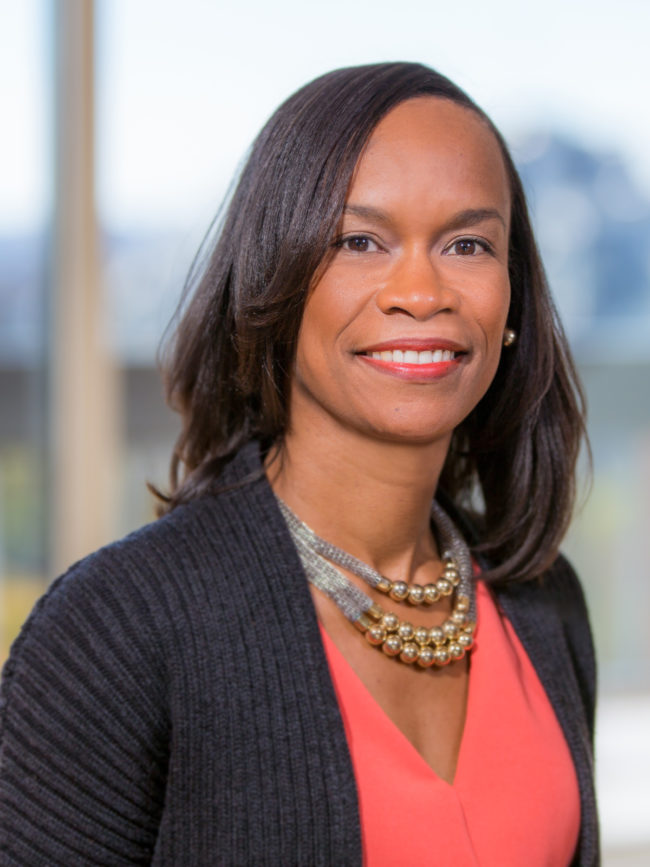 Valerie Wilson: What unifies each of these policies is that they provide a benefit to the owners of capital at the expense of the typical worker. All of those things have contributed to patterns of growing wealth and income inequality over the last 40 years, as well as wage stagnation.

My work focuses largely on racial economic inequality. When we talk about dynamics that widen the divide among the wealthiest 1% and everybody else, communities of color are more likely to be at the lower end of that distribution compared to everyone else. At the same time that we see these growing income and wealth disparities, we also see widening of racial disparities in wages and income.

In a series of articles called “Unequal Power” you write about how various factors disadvantage Black workers with respect to finding and keeping jobs. What does your research show?

There are unique impacts for Black workers because of the way that race plays into labor market dynamics. In describing inequality in wages and unemployment, a lot of the economic models for how the labor market functions assume that individual employers don’t have any power to hire or retain workers at less than the going market rate. A worker, so this model contends, could easily decide that they’re going to take a job at another firm that pays the prevailing market wage.

But public policy, employer practices, geographic immobility and asymmetric information between employers and employees complicates this model of perfect competition. Workers can’t easily decide that they’re going to go somewhere else. Do they even have information about other options that are available? These mainstream models fail to explain why we have persistent racial inequality in unemployment and wage outcomes. There is an inherent imbalance of power between employers and employees.

Black workers are perpetually about half as likely as white workers to secure employment at any level of unemployment. That diminished leverage impacts the worker’s willingness to hold out for a better offer or even to challenge unfair or unsafe working conditions because of concerns about how long it may take to find another job or fear of employer retaliation.

“Even when we control for factors that we assume more reasonably would affect one’s wages, including education, experience, geography, we still see a persistent racial disparity in wages.”

You have written about the impact of the loss of manufacturing jobs for African American workers in the last 20 years due to globalization. What are the numbers?

Large scale loss of manufacturing jobs hollows out whole communities and destroys a local culture. When people lose what are sometimes good union jobs, what happens to them? Where do they go?

People who are able to leave and have the means to relocate move to a different place where there are better economic opportunities. Those that are not able to do that suffer higher unemployment and general economic instability that comes with the hollowing out of home communities.

One way to look at these numbers is to point out structural aspects of our economy that impact individual and group outcomes. Another way — let’s call it an individualistic approach — is to say that success is a matter of individual initiative or that more education and training will redeem the extreme inequalities that are present.

A two-to-one disparity exists at every level of education. So even when we equalize education, we still see different employment outcomes for Black workers and white workers. Even when we control for factors that we assume more reasonably would affect one’s wages, including education, experience, geography, we still see a persistent racial disparity in wages. This points towards the fact that there is something structural there.

“The downside of wanting cheap goods is that the workforce involved in that sector pays the price through lower wages and benefits.”

The Infrastructure Investment and Jobs Act means $550 billion in new federal funding for roads, bridges, rail, broadband. How should that money be rolled out in a way that guarantees jobs are available to communities who have been hit hardest by deindustrialization?

The good thing about that is that infrastructure is something that everybody agrees is necessary. It’s important to prioritize those investments in places where we have seen a significant decline in employment. It’s very easy to figure out where those places are. It’s also important that state and local leaders are involved because they are most knowledgeable of the conditions and challenges in their local community.

Community-based organizations are key because they have the relationships and trust of local people and can advertise the jobs and recruit workers under local hire requirements. If you’re investing in infrastructure in a community then people who live in that community should definitely be a part of that workforce.

There are also indirect jobs that are created through procurement and contracting. You want to make sure that you have a diverse pool of contractors in terms of race and ethnicity as well as gender. Then there are things that people need in order to go to work such as child care and adequate transportation.

Amazon is one of our largest employers. There has been an explosion of warehouse jobs in the Inland Empire here in Southern California. Is there any reason why those jobs cannot pay high wages and benefits similar to what was paid to auto workers who were members of the United Automobile Workers union in its heyday?

There’s no reason why the wages and benefits can’t be as good. One of the tradeoffs to having good pay and benefits is that people want cheap, inexpensive goods. Labor costs are one of the highest costs of production. The downside of wanting cheap goods is that the workforce involved in that sector pays the price through lower wages and benefits. But better overall conditions can be achieved in the same way that it was achieved in the auto industry through workers having more power and more ability to organize to join unions and to collectively bargain.

“When you look at the growth of economic inequality over the last four years the divide has been along class lines.”

Right-wing politicians are expert at politicizing loss by turning people’s anger and fear about downward mobility into a racial grievance. Supposedly, the argument goes, African Americans or Latinos or immigrants are benefiting at your expense. Can you talk about that dynamic as it relates to your research?

That is a major political tactic to distract from the kinds of solutions that will benefit all workers. Part of that argument is true. Yes, someone else is benefiting at your expense, but the part that’s wrong is who the beneficiaries are. When you look at the growth of economic inequality over the last four years the divide has been along class lines. Those who have benefited have been the wealthiest and most powerful people in the country.

We must recognize that the majority of folks are in the same boat in terms of stagnant wages and less access to the kinds of benefits and job supports that are necessary for their own economic, physical and mental well-being. The rightwing divides people by saying, “You’re losing your job and the government is spending all of this money to help people who don’t want to work.” This is totally inaccurate. It’s not that Black and Latino workers are all of a sudden doing much better while white workers are suffering. All workers are suffering, and the pain in communities of color is actually a bit more amplified.

It’s a tactic to racialize the programs and investments that would benefit all people. Policies that could be universally beneficial would be raising the minimum wage, strengthening the right to organize, updating labor standards, universal access to health care and quality child care and early childhood education. When we invest in those areas there’s less available for the wealthiest members of society, the owners of capital, to keep for themselves.

The French economist Thomas Piketty has recently drawn attention to the relationship between capitalism, democracy and inequality. He wrote recently that “inequality is essentially ideological and political, not economic or technological.” I take this to mean that there is no objective economic or technological reason that requires the degree of wealth inequality that we have.

I absolutely agree with that assessment. I think the simple fact is that inequality is directly related to policy decisions. We’ve talked about neoliberalism and deregulation and global trade. The inequality that we’re seeing is the result of rules put in place by policy. That being the case, inequality can also be reduced by changing those policies and embracing alternative ones. There’s nothing inherent and necessary about inequality. The same is true with racial inequality.