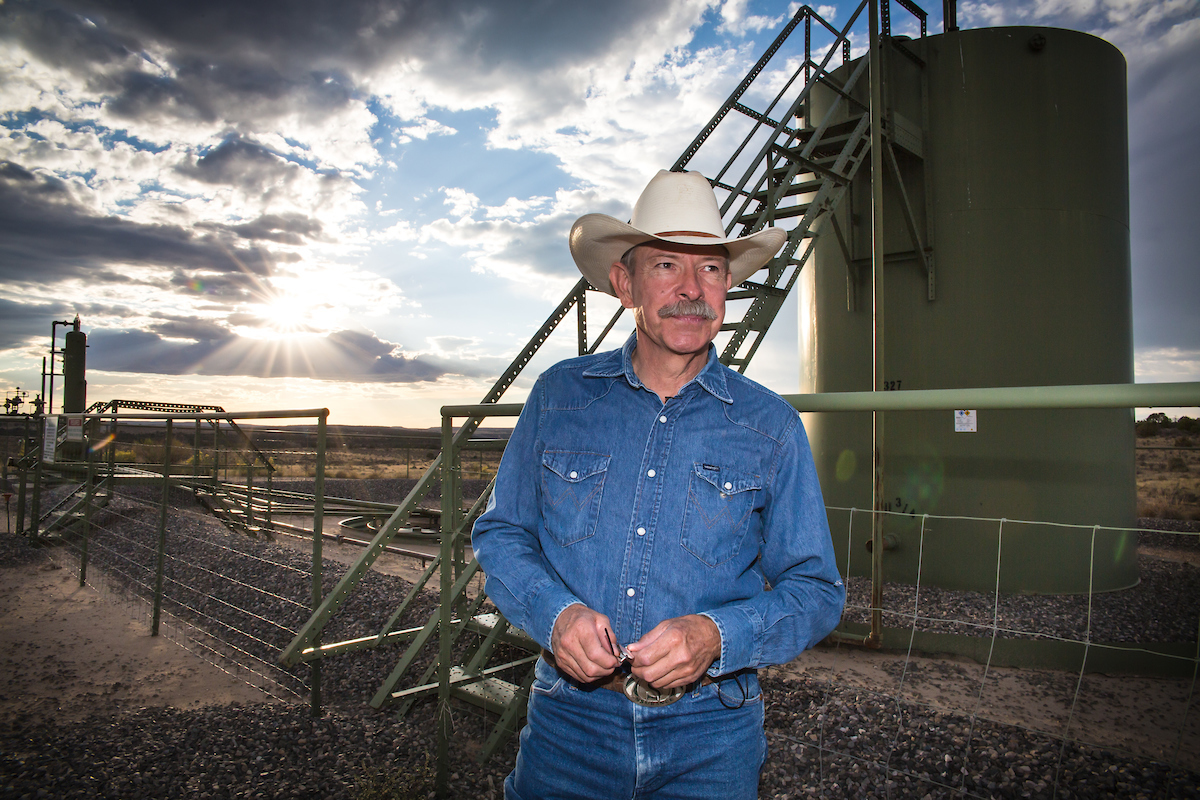 Don Schreiber on his ranch in Gobernador, New Mexico in 2014. Photo by Julie Dermansky.

As Don Schreiber stands in the front yard of his ranch near Farmington, New Mexico, he no longer counts cattle — he counts gas wells. And he sees 10.

“That’s just the ones that you can see,” he says. There are more nearby, but they are hidden by trees.

Schreiber’s ranch sits on 5,760 acres in the middle of the San Juan Basin, the smaller of the state’s two oil and gas producing regions. Smaller, but not small. There are more than 22,000 oil and gas wells there, and 122 of those are on his land, all of them pulling up natural gas. There are 30 wells within a mile of his house.

This story is part of Covering Climate Now, a global journalism collaboration strengthening coverage of the climate story.

None of them are his. The property is what’s known as a split estate, with the topside being one property — Schreiber’s — and the subsurface mineral rights another. He gets no royalties from the wells, but he is obligated to provide access to those mineral rights.

“I’m watching a Hilcorp truck ride out of my property right now,” he says. “He’s doing a good job. He’s observing the speed limit, which I appreciate. But he’s driving right through our front yard.”

Stripper wells are a category of old wells that produce comparatively small amounts of oil and gas but can still pollute as much as more productive wells.

All of the wells on Schreiber’s land are owned by the Hilcorp Energy Corporation of Houston, which has oil and gas operations from Alaska to Pennsylvania to Wyoming to Texas — and 11,593 active wells in New Mexico, all of them in the San Juan Basin.

Of those 30 wells within a mile of his house, 22 are stripper wells, a category of old wells that produce comparatively small amounts of oil and gas but can still pollute and leak as much as more productive wells. They are at the center of their own hot spot, this one centered on the New Mexico Environment Department (NMED). The agency has proposed regulations to clamp down on leaks from oil and gas wells, but the proposal exempts stripper wells from the stricter standards. The exemption would benefit some very large producers and leave environmentalists — and people living near these wells — very unhappy.

Before retiring to the ranch 20 years ago, Schreiber spent two decades selling corporate insurance from his office in nearby Farmington, where he grew up. And much of that insurance supported the oil and gas operators in the region. The irony isn’t lost on him.

“I describe growing up in Farmington as growing up in a goldfish bowl of fossil fuels,” he says. After two years of ranch living near wells he found “that the air has all kinds of bad things created by the industry that I’d insured.” He has since sold his cattle, leases out his land to neighboring ranchers and fights for better oil and gas regulations.

When asked to describe where his ranch is, Schreiber references the notorious methane hot spot that hovers over that corner of the state. “If you took the methane hot spot and dropped a plumb line down through the middle of that, you’d hit our ranch,” he says. Most of the methane in that hot spot comes from leaking and venting on oil and gas wells. And that methane is where he gets his Twitter handle “Methane Mad Man,” a sobriquet given by a granddaughter for his fight against methane leaks in the San Juan. Two state agencies regulate the oil and gas industry in New Mexico from two different directions though with often complementary goals: The Oil Conservation Division (OCD) limits waste of the state’s valuable — and taxable — petroleum resources. The NMED, through its Air Quality Bureau, regulates air pollution. They are both interested in natural gas leaks because methane is a valuable, taxable fuel when kept in the system, and it’s a potent greenhouse gas that often leaks with other air pollutants when it escapes.

In March, OCD finalized its own set of rules governing methane emissions that requires producers to reduce the amount of natural gas lost through venting and flaring by 98% from all oil and gas wells by 2026. Publicly previewed months earlier, the final rules drew no public pushback from industry lobbyists and a generally warm response from environmental groups.

Meanwhile, NMED plans to release its set of rules for oil and gas production in May. Maddy Hayden, director of communications at NMED, says, “NMED’s rule will address ozone precursors — VOCs and NOx. A collateral benefit of NMED’s rule will include additional methane reductions.” But NMED’s proposal released last year leaves a large loophole for stripper wells.

Both sets of rules are responses to New Mexico Gov. Michelle Lujan Grisham’s 2019 executive order mandating that state agencies reduce greenhouse gas emissions across the board. As the NMED and OCD regulate the one industry responsible for more than half of all of the state’s greenhouse gas emissions, their rulings are key to reaching the governor’s goal.

But where the OCD’s rules received widespread acceptance, NMED’s proposed rules raised howls from environmental groups for its exemptions for stripper wells and other small sources.

There are nearly 30,000 stripper wells across New Mexico, and they pump out roughly 4% of all oil produced and 7% of natural gas produced.

“These comments from environmental groups were based on the first draft rule NMED released for public comment last summer,” Hayden says. Since then, she says, the department has reviewed the OCD rules and received thousands of public comments that together “have resulted in substantial improvements to the proposed rule.”

Those improvements won’t be known until May.

Stripper wells like the ones around Schreiber’s ranch are a small but significant slice of the production pie in New Mexico.

According to OCD and NMED, these are wells that produce less than 10 barrels of oil or less than 60,000 cubic feet of natural gas per day. But there are nearly 30,000 of them across the state, and they pump out roughly 4% of all oil produced and 7% of natural gas produced.

Often decades old, the wells strip the last bits of oil and gas from their deposits as they run out their economically useful lives. Those lives can be quite long. For example, Hilcorp has 1,530 wells that were initially drilled before 1950. Their oldest recorded well dates to 1923 and sits about six miles west of La Plata, New Mexico. Stripper wells might not produce much oil and gas individually, but that doesn’t mean they don’t leak.

According to a report from the Environmental Defense Fund, smaller producing wells still leak oil, natural gas and other greenhouse gasses. The report notes other research showing that “emissions are random, unpredictable and ubiquitous” throughout the industry

That same report says that the NMED stripper well exemptions, coupled with other exemptions, would still allow emissions from 95% of wellheads and production sites across the state.

A common industry canard says that stripper wells are the mainstay of small, independent operators. The National Stripper Well Association represents well owners across the country. It calls them “the ‘family farmers’ of the United States energy sector.”

In a release that pillories out-of-state environmental groups for their involvement in the rules drafting process, Jim Winchester of the Independent Petroleum Association of New Mexico says, “Smaller operators would have no choice but to prematurely plug and abandon thousands of stripper wells in New Mexico” if faced with stricter emissions regulations.

The reality is more complicated.

A review of OCD records shows that the 29,838 active stripper wells in the state are run by 356 operators. Out-of-state corporations outnumber New Mexico operators by more than two-to-one and operate the majority of wells.

The top 20 stripper well owners have more wells than all of the remaining operators combined. In fact, you have to go 100 deep in the operator list to find one that has fewer than 30 wells. There are 219 owners with 20 wells or fewer and together they have 1,253 wells, about 4% of the total. And most of them have conventional wells as well.

“There’s a certain desperation or urgency, you might say, to companies that are heavily dependent on stripper wealth. And you know our answer to that? It’s ‘tough shit.’”

“Hilcorp is the beneficiary of the mom-and-pop myth,” Schreiber says, “because Mr. $1.9 Billion is not mom and pop.”

“The Environment Department is required to take the economic impact of regulations into account,” says Hayden of NMED. However, “The new draft rules … will distinguish stripper wells owned by ‘mom and pop’ operators from those operated by larger corporate entities.”

That would require some sleuthing. A small number of stripper wells run by a family business doesn’t mean that a company is a “mom and pop” operation. For example, the Yates Energy Corporation operates just four stripper wells, yet is owned by one of the wealthiest families in the state — wealth made primarily from the oil and gas industry.

Singer from WELC has a blunter assessment of stripper well protections.

“There’s a certain desperation or urgency, you might say, to companies that are really deep into or heavily dependent on stripper wealth,” says Singer. “And you know our answer to that? It’s ‘tough shit.’”

Nathalie Eddy, field manager and New Mexico field advocate at the environmental group Earthworks, recently visited Schreiber on his ranch, and the two of them used a special infrared camera to monitor leaks from the wells there.

“The cumulative impacts of what Don and other fellow ranchers in that area are exposed to on a daily basis, just by living in that oil and gas field, is alarming,” she says.

Hilcorp did not respond to multiple queries for this story.

When talking of the proposed NMED rules, Schreiber points north from his ranch and says, “Colorado just did it.”

Last November, Colorado enacted a raft of new oil and gas regulations, covering everything from well placement to a near-total ban on emissions.

In a statement, Dan Haley, the CEO of the Colorado Oil and Gas Association, said, “Colorado now undoubtedly has the toughest oil and natural gas development regulations in the country … All of Colorado can be proud of that.”

But on the New Mexico side of the border, Schreiber doesn’t feel proud. He talks of standing on the highest spot on his ranch and seeing Colorado, 17 miles away. There, wells owned by Hilcorp and others drill into the same petroleum formation, but they are held to stricter standards than their wells in New Mexico.

If they were to be implemented today, he says they would still emit pollution “right in my face,” he says. “Right in the face of the environment, the wildlife, building up that same methane hot spot.”

He won’t be happy until the leaks and the pollution are gone completely.