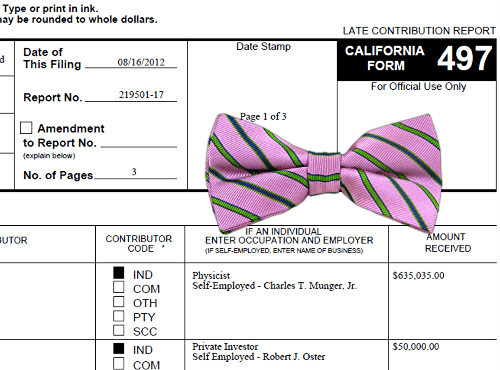 Remember the Healthy Forests Act? Or the Clear Skies initiative? How about the Voter Protection Act? Conservative activists and legislators have floated these and other Orwellian-sounding political measures in recent years – laws designed to accomplish the exact opposite goal their titles claim to advocate. But perhaps no political measure is as breathtakingly disingenuous as California’s Proposition 32, the November ballot initiative that supporters claim will “stop special interest money” from flowing to Sacramento.

Funded primarily by conservative multi-millionaires, the initiative would strip labor unions of the ability to use membership dues for political purposes, while largely leaving the clout of wealthy individuals and private corporations untouched – the “fraud to end all frauds,” as Los Angeles Times writer Michael Hiltzik has labeled Prop 32. Instead of unilaterally curbing “special interests,” this bill would politically kneecap the most significant opposition to the largely pro-corporate, neoconservative agendas of its wealthy backers. The ripple effect would endanger everything from the most basic consumer, environmental and workplace protections to funding for essential services for children, the poor and the elderly.

The personal prejudices and political hobbies of Prop. 32’s individual sponsors provide a view of the kind of California these men of money and power envision for a future in which their whims could well become legislation. Prop. 32’s leading donor is Charles Munger Jr., a Stanford physicist and heir to the fortune of Warren Buffet’s Berkshire Hathaway business partner Charlie Munger. The third-largest individual political donor in California since 2001 (spending $14.1 million, almost all on Republican candidates and political platforms), Munger Jr. has given $875,035 to push Prop. 32 thus far, according to his latest filings as a “major donor” with the California Secretary of State’s office.

Aided by a non-threatening fashion sense (like Tucker Carlson, Munger is a firm believer in the un-ironic bow tie), Munger has positioned himself as somewhat of a moderate libertarian. Other than his advocacy for Prop. 32, Munger has remained rather vague in spelling out his economic ideas.

Nevertheless, Munger’s political activities reveal his true stripes. He was a backer, in 2005, of a failed ballot measure to extend the probationary period of school teachers seeking tenure, and donated millions to Arnold Schwarzenegger’s various gubernatorial campaigns. Like Munger, Schwarzenegger also projected a hologram of affable moderation but his legislative agenda was anything but.

This past May, Munger donated $750,000 to help launch a new Republican think tank called the California Reform Institute. According to an August, 2012, Los Angeles Times piece, the CRI’s sole purpose is to boost Republican State Senator Sam Blakeslee’s political ambitions. Blakeslee, who has voted against home-foreclosure reform, prohibitions against sexual-orientation conversions therapy and funding for school transportation, enjoys a 100 percent approval rating from the arch-conservative Howard Jarvis Taxpayers Association.

Still, Munger has kept his economic ideas hazy enough that a recent Los Angeles Times profile described his political temperament as “centrist,” owing to the fact that he balances his anti-taxation views with calls for the Republican Party to soften its focus on gay marriage and abortion – much to the chagrin of his conservative allies.

“I would’ve been very welcome in Republican circles if I decided to go chuck $10 million in a bunch of races up and down the state to fight for Republican control of Congress,” Munger told the Bay Citizen Web site in 2010. “It isn’t a worthy ambition compared to doing this,” he said of his slow-burn libertarian agenda.

As a result, Munger’s media treatment has established him as the perfect conservative frontman for the Prop. 32 effort – a sort of John McCain maverick-type, willing to buck the conventional wisdom of his party. According to this narrative, Munger’s aversion to blood-and-guts evangelical social activism bestows upon his current Prop. 32 efforts a sort of principled libertarianism.

And yet a look at his fellow major contributors reveals a decidedly different picture of the forces behind Prop. 32. Beneath Munger on the donor rolls, a more anti-gay, anti-choice collection of moneyed, pro-corporate political missionaries couldn’t be found – ultraconservative Brahmins who have no hesitation throwing around their money and political might to advance their agenda.

Newport Beach-based real estate investor Larry T. Smith, for example, has so far contributed $255,000 to the cause. Smith is a prominent proponent of “gay-to-straight” conversion therapy for minors who personally donated $50,000 to help support Prop. 8 and funneled even more money to the campaign through his political action group, the Family Action PAC.

Family Action, according to its mission statement, isn’t “a small band of monied Republicans who want to adopt the mantra of the left and move away from the Republican Platform, i.e., become more Democratic Party-like in the Party’s stand on social issues. We will not abandon the Republican Party’s long-standing support of unborn children, sanctity of life and traditional family values for political expediency [sic] sake.”

Curiously, since 2009 the largest recipient of the Family Action PAC’s funds has been Smith’s own company, MHI Real – to the tune of more than $108,000 for “fundraising events.”

Smith’s position as the founder and chair of his own personal PAC has given him a bigger soapbox from which to espouse his religious and political views.

Smith’s choice of words in defining gay rights as a “special interest” is particularly notable, considering Prop. 32’s Web site advocates “taking back California by reducing the influence of Special Interests across the board.”

Smith, however, certainly isn’t alone in his desire to impose right-wing Christian political values on California and the nation. Fellow Prop. 32 donor Howard Ahmanson was one of the leading backers of Prop. 8 in California, donating nearly $1.4 million.

The heir to a $300 million fortune, Ahmanson, who suffers from Tourette syndrome, once told the Orange County Register that his political aspirations for the country involved no less than “the total integration of biblical law into our lives.”

Ahmanson has had the sense to impose a virtual media blackout on himself ever since. But while he’s largely clammed up about his politics to the media, his money has yet to stop talking. Throughout the 1990s, Fieldstead and Co., the entity that manages Ahmanson’s private assets, channeled money to such rock-ribbed conservative nonprofits as ALEC, the Cato Institute and the Heritage Foundation.

He’s donated millions to both creationist and school-voucher causes, and in 1998 and 2005 he donated to the two previous “paycheck protection” initiatives that sought to limit the political activity of unions, giving, respectively, $98,000 to Yes on 226 and $20,000 to Yes on 75. In the 2005 election he also funneled $115,900 into the failed Proposition 73, which would have required parental notification by females under 18 years seeking abortions.

Ahmanson also has a history of financial support for the California Taxpayer Protection Committee.  Fieldstead and Co. recently gave the anti-tax-and-regulation group $60,000 and Ahmanson donated $20,000 personally in 2008. The CTPC’s roster of donors is mainly from the insurance and oil industries. According to Ballotpedia, it supported 2010’s controversial Mercury Insurance-backed Prop. 17, which was widely seen as an industry attempt to gut California’s car-insurance reform law.

In the early aughts he donated $1 million to the American Anglican Council – ostensibly to help undermine the tide of tolerance growing in the church towards LGBT parishioners. In a 2004 interview with Salon, Ahmanson’s wife Roberta said of her husband, “His goal is to do with his money what God wants him to do.”

So far, that primarily has revolved around electing socially conservative Republicans and fighting against gay rights, although Ahmanson found the time in 2003 to become one of the primary backers of Gray Davis’ recall.

Strangely, Ahmanson told the Daily Beast in 2009 that shortly after Prop. 8 passed he decided to become a “blue-dog Democrat.” What parts of him became Democratic remains to be seen. Fieldstead and Co. recently donated $375,000 to the California Taxpayers Advocate, which California Republican Assembly candidate Matt Kokkonen – a Tea Partier – labeled a “slush fund” in service of “Big Medicine, Big Utilities, Big Developers, and Big Grocers” back in 2010. “Blue Dog” Ahmanson also donated $50,000 to the California Republican Party this past May.

Proposition 32 is not, of course, a conspiracy cooked up by a Billionaire Boys Club, but is part of a frontal assault on consumer rights, worker and environmental protections and the very idea of robust government services. Its coalition of donors and potential beneficiaries include corporations and ideological cadres who are philosophically opposed to the idea of taxation and government regulation.

Such donors include the Howard Jarvis Taxpayers Association ($125,000), the Lincoln Club of Orange County ($110,000) and Web Laundry Services (WEB)’s CEO William Bloomfield Jr. ($300,000) – a real estate tycoon who is also running for a seat in the U.S. House of Representatives against Los Angeles Congressman Henry Waxman.

But in the weeks to come, it will probably be the “moderate libertarian” Charles Munger, the leading donor to Prop. 32, who will be thrust into the limelight to articulate the need to eliminate union political spending. Like Clear Skies, Healthy Forests and voter protection, Munger and his bow tie will put up a clean enough front for Prop. 32. But it’s the other moneyed figures now lurking in the shadows who tell the true story of this initiative.