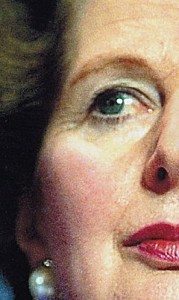 I have been humming one of my favorite Elvis Costello songs from the moment I heard the news of Margaret Thatcher’s death Monday morning. The chorus never fails to move me:

“When they finally put you in the ground,
I’ll stand there laughing, and tramp the dirt down.”

A friend forwarded me some other excellent Thatcher songs, and I spent last night on a truly enjoyable trip down Memory Lane.

The songs and videos gathered include Costello’s, along with Billy Bragg’s, and the Specials’ “Ghost Town” – which was the soundtrack to a summer spent in London when I was 14 — and more hardcore offerings. Perhaps Thatcher’s one positive legacy is the inspiration she provided to punk rock. I remember the kind of ecstatic anger I felt listening to some of those bands – and Thatcher was an excellent focus for that anger.

I grew up with Reagan and Thatcher in the ’80s, between the States and the U.K. At the time, the two leaders seemed to me to be unwelcome gifts from the boomers – what we were left with once the ’60s party was well and truly over.

Thatcher’s death this week struck me much more forcefully than Reagan’s did. I found myself more profoundly angry at the soft-focus media coverage of the Iron Lady. (Although the overwhelmingly positive coverage of Reagan’s history when he died was jarring in the extreme. Iran/Contra anyone?) They were a symbiotic pair. Reagan the muscle, and Thatcher the brains.

And what amazing damage they did together. War, unemployment, austerity, attacks on immigrants, ignoring the AIDS crisis, and the extremely effective frontal assault on the labor movement in both countries. Reagan had PATCO and Thatcher had the NUM. I was definitely caught up in the tragedy of that latter battle involving the National Union of Mineworkers – a venerable and radical union fighting to protect its members’ jobs in the face of an absolutely vicious attack.

When I was  a high school student, Reagan and Thatcher’s joint nastiness was something of an inspiration. They really were the bad guys. They were a big part of why I got active in politics, beginning with my first demo in 1982. Somehow I take Thatcher more personally. I was born in England, after all. Their enduring legacy of neoliberalism still provides me with a motivation to be active, so perhaps I have a personal reason to thank Thatcher — but I’m still going to be tramping that dirt down.

Medicaid: Conservatives Get Flexible (Sort Of)