“It’s raining! It’s pouring! Evictions are soaring!” chanted the small but defiant crowd on the corner of Vermont and Franklin avenues in Los Angeles’ gentrifying Los Feliz neighborhood. Holding signs reading, “Honk if your rent is too high” and “Where will you go when you can’t afford your neighborhood?” the demonstrators had come to protest the Ellis Act eviction of the residents of 1655-65 Rodney Drive from their 12 rent-stabilized apartments.

Evictees brought piñatas emblazoned with the names of their landlords.

Enacted in 1985, the Ellis Act provides a way for landlords to get out of the rental business other than selling their properties. Under this law, a landlord can evict an entire property’s residents with 120 days’ notice for most tenants, or a full year’s notice for senior citizens and disabled tenants. If the landlord tries to re-rent the apartment within five years, then the tenant has a right to reclaim his or her old apartment at the same rate they were paying when evicted. After five years, the landlord can then re-rent that unit at market rates.

With the last day of their notices coming up quickly, the Rodneyites have had to scramble to find new homes.

“I’ve been here for 23 years,” said evicted resident Mark Simon. “I moved here in November of ’92. And it was such a stable home for me, I never expected to move — as did so many of us. It totally shatters your system. I really, honest to god, have not had a great night’s sleep [since being evicted],” he added.

Speaking about the troubles faced by the residents in looking for new apartments, 10-year resident Roberta Morris said the problem is not just that everyone is simply paying a little above their old rents — “It’s whether you’re paying two or three times more.” 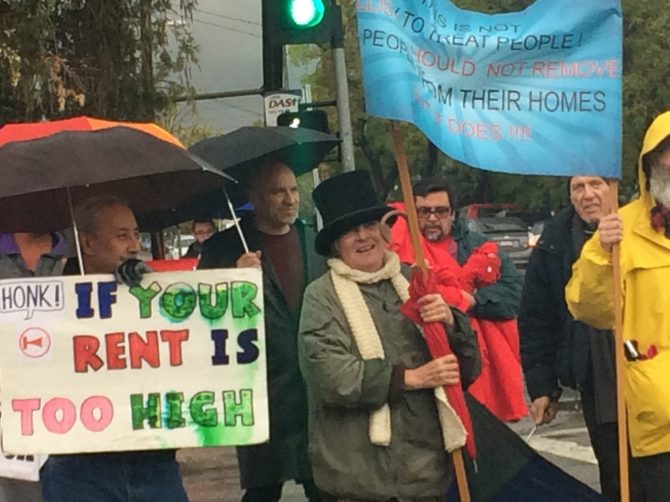 After chanting and picketing in a drizzling rain, the protestors walked down Vermont to the now-empty apartment of Walt Senterfitt for a press conference. Senterfitt and Morris spoke to the gathered crowd in front of piñatas emblazoned with the names of their landlords: Jeffery Scapa and William Silverman.

Senterfitt and Morris drew parallels between the decreasing amount of affordable, rent-controlled housing and the increasing number of homeless people on the streets of Los Angeles, pointing out that some of the evicted residents’ apartments were already reoccupied within mere weeks of being emptied. Although the evicted residents told Capital & Main that Scapa and Silverman insisted to them that this is okay because the new tenants are not paying any rent, the original residents are not so sure.

According to Simon, the residents’ troubles with Scapa and Silverman began when the two men first purchased the property in 2011. He said that Scapa showed up that very day offering the long-time residents $7,000 to move. When none of the residents took him up on his offer, he responded by informing them that they could no longer have furniture on their patios (even those only accessible from single apartments) and that they had to remove the air-conditioning units installed by a previous owner. After the residents retained an attorney, they did not hear from Scapa or Silverman until January of 2015, when they were given their Ellis Act eviction notices.

After concluding their talk, Senterfitt and Morris called the landlords on speakerphone, and were answered by a man who identified himself as William Silverman. Senterfitt informed him that he was on speakerphone in front of the gathered crowd and cameras, and began to question him. When Senterfitt asked about the Ellis Act evictions, Silverman insisted that he and Scapa were acting within the law. After Simon pointed out that the disabled and elderly residents had to retain a lawyer in order to get their legally required one-year move-out period, Silverman hung up.

Calls to Silverman and Scapa for comment were not returned as of the posting of this article.

Senterfitt pointed out that anyone could see, through an open door, that one of the newly emptied apartments was in the process of being renovated, remarking “that’s not what you do if you’re going out of the rental business.”