Michael Ross traveled from Upland, in California’s Inland Empire, to attend the Defend DACA March in Los Angeles this past Sunday. He couldn’t physically walk any further and decided to sit on a chair he found on Bonnie Brae St. near MacArthur Park where the march began.

All Photos by Joanne Kim 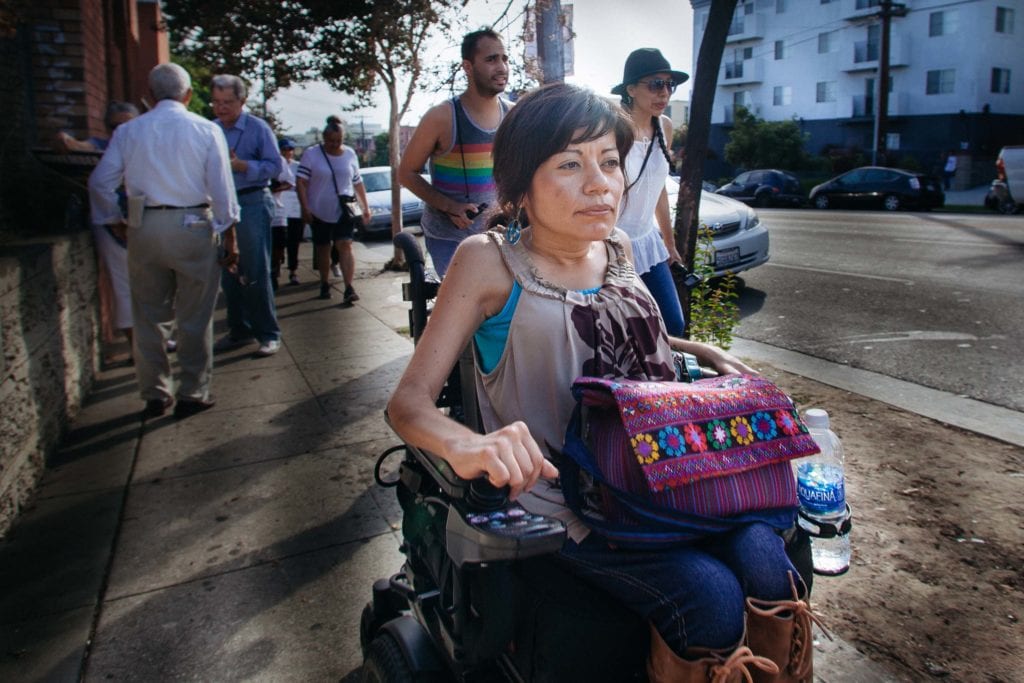 Though the sidewalks were lined with uneven cracks, Rosalba Rios trekked onward in her wheelchair to join the march up Alvarado St. She works as a mental health therapist in Inglewood. 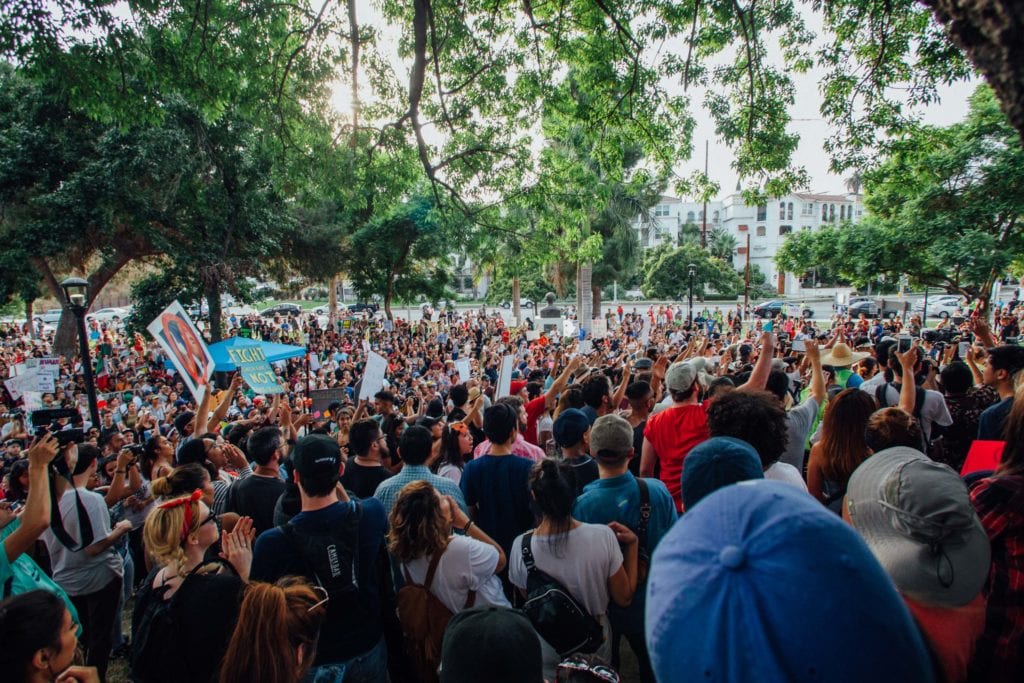 In Echo Park, protesters cheer as a man shouting into a megaphone that they did not have a right to be gathered there finally leaves after being peacefully asked to do so by the crowd. 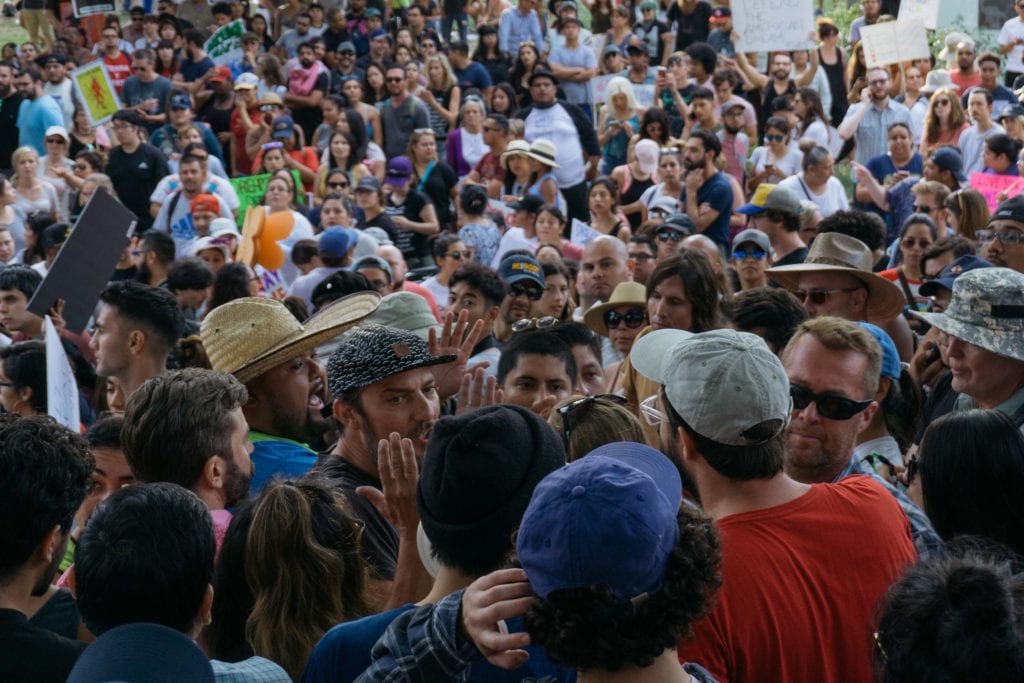 Protesters ask an attendee to leave the rally after he shouts and interrupts speakers. Center: Ruby Cedillo Bravo from Lynwood, California is 19 and a student. She feels everyone should defend DACA and that we, as a nation, need to work together to stop racism. A protester marching in Echo Park towards Olvera Street in downtown Los Angeles. Alicia Estidillo, a DACA recipient, is 30 years old and works as an early interventionist with kids with disabilities. Artist Emmanuel Galvez (at right of the sign), age 26, grew up in Mexico City and Los Angeles and is a DACA recipient. He created this illustration to send a message to President Trump. The other side of his sign says, “ Soy de Aqui, Soy de Alla.” He wanted to convey the message that we all belong here, and we all belong there. His friend Alex Gonzalez (left) took the day off of work to attend the march. Customers from Club Bahia cheer protesters as they march towards Olvera St. on Sunset Blvd. Jestin Samson traveled from Orange County to attend the march in Los Angeles, representing those who were afraid to come. His family is from the Philippines and members remain hidden in fear of being deported. Hundreds of protesters gathered to send a message to the Trump administration that they disagreed with the decision to rescind DACA. They marched towards Olvera Street from Echo Park, with the day beginning in MacArthur Park. Luisa Lopez, age 18 (center), lives in Orange County and came to Los Angeles to attend the march. She is a student at Santa Ana College. A child protests at the Defend DACA March rally at Echo Park. Many families attended the march, even those with small children. 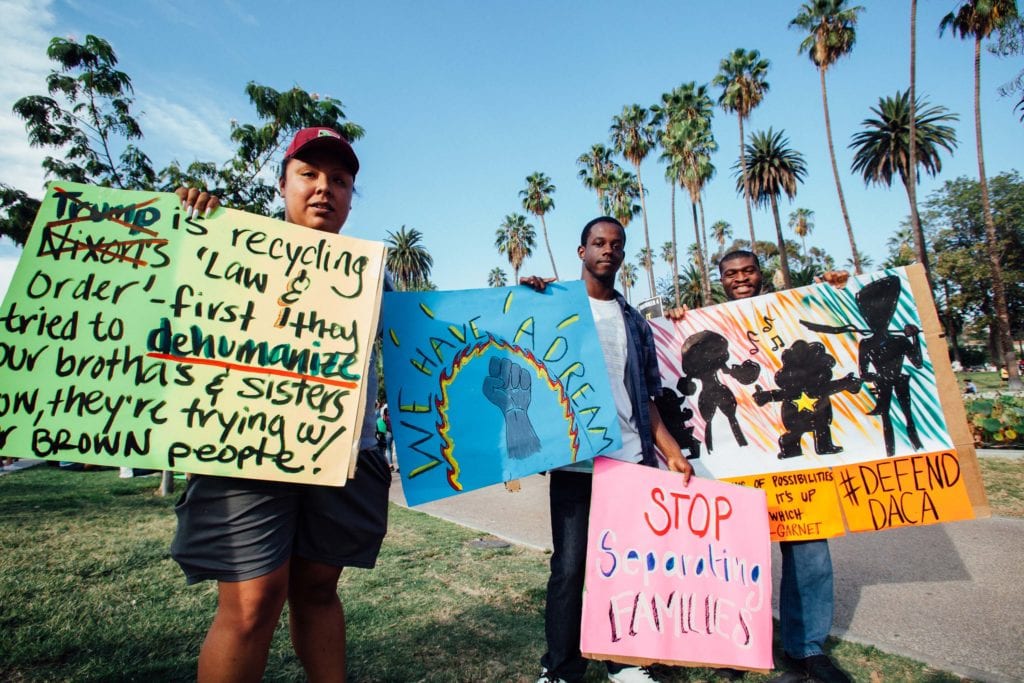 Eddie Ibanez and his five-year-old son, Damien, drove all the way from a town near Las Vegas, Nevada, to attend the march.

Could the Dream Act Become a Nightmare for Young Immigrants?