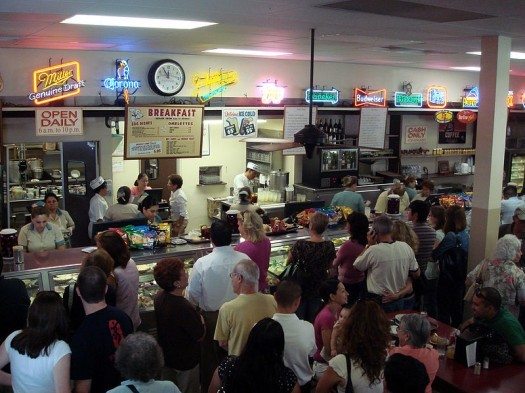 (Jack Lavitch and Henry Lee are two West L.A. retirees who are also part-time, second-hand car buyers. They were lunching at Philippe the Original sandwich diner near central Chinatown when asked about the coming mayor’s race.)

“First and foremost, the next mayor should fix up our city streets. There are potholes everywhere and they are a danger to us all. This would be something everyone could easily see — it would make a huge difference for everyone. That’s something [the mayor] could actually accomplish. It wouldn’t cost that much and it would make us all feel better about the whole city.”

“Oh yes,” he adds, biting into his sandwich. “He could get everyone free French dips like this one every Friday. I am joking.”

Jack is skeptical about official claims stating the city is nearing bankruptcy. “Maybe they actually are but they haven’t convinced me or the public. There are still plenty of places to cut expenses. Like with city officials’ over-padded travel budgets.”

What big mistake should the mayor try the most to avoid once he or she is elected?

“He should avoid graft—like that pay-to-play stuff that was going on a few years ago at City Hall. It destroys the voters’ trust and wastes a lot of the taxpayers’ money. Oh yeah, and he ought to watch his sex life. He should only get laid in private.”

“My feeling is that the first thing the new mayor ought to do is to back off on some of the severe, uncalled-for city revenue-enhancement policies. Particularly with the city’s parking meter collections.  Did you know the city can actually reach into your private banking account to collect traffic fines? Yes, and they did it to me and I think it’s just too much. It’s driving me out of the city. Literally. I’m moving to Palm Springs.

“They have these computerized parking meters now that reset the meter when someone leaves a space. That’s just like stealing money out of your pocket. The mayor ought to avoid such costly measures that don’t really bring in that much revenue, but which make people really angry at the city.

“I also kind of wonder if the city is really having all the revenue problems they claim to have. Maybe they are just shuffling money around from department to department, like the papers say the state has been doing.

“I think the new mayor [ought] not to do that. I believe that instead, he ought to give a fair accounting of the city’s real finances.”