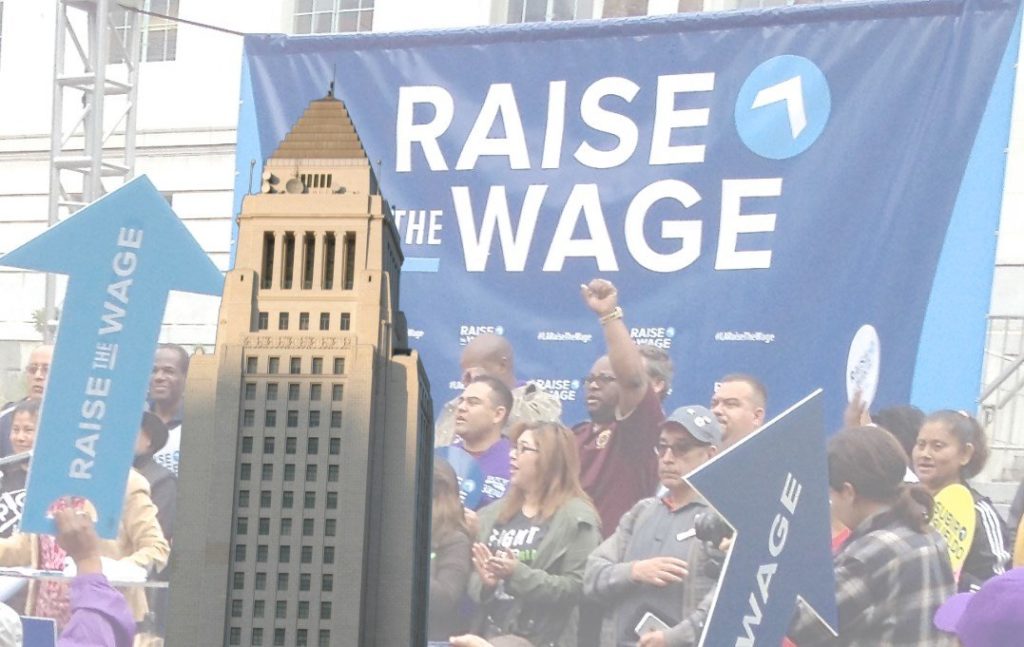 Fair wage advocates won a big victory Tuesday, when the Los Angeles City Council voted 14-1 to advance a measure that would gradually boost the base pay in the City of Los Angeles to $15 an hour by 2020. City Attorney Mike Feuer will now be asked to draft a minimum-wage ordinance that the council will vote upon to make the measure law.

The legislation begins by raising the current wage of $9 an hour to $10.50 in July of 2016—after that the hourly wage would go up each year by one dollar. The vote could lead to making Los Angeles the largest city in the nation to set a minimum wage standard above the federal level, one that will benefit some 600,000 employees in the city—some 40 percent of L.A.’s workforce. The decision also adds heft and momentum to efforts nationally to raise the minimum wage for the nation’s lowest-paid workers.

“That will be fantastic,” says Dan Flaming, president of Los Angeles’ Economic Roundtable, a nonprofit policy research group. “Our cost of living is 37 percent higher than the national average. We’re a low-wage city with a high cost of living.” The United States, with an hourly federal minimum of $7.25, ranks 11th out of the 27 countries in the developed world that set a minimum wage standard. The U.S. minimum wage makes for an hourly take-home pay of $6.25.

Flaming is one of the authors of an Economic Roundtable study that predicts a minimum wage raise will create more than 20,400 jobs in the City of Los Angeles and reduce public assistance costs by $313 million annually, by pumping dollars into the local economy.

He tells Capital & Main that, in the case of McDonald’s franchises, “money that gets distributed broadly to shareholders all over the world would stay in L.A.,” especially in the low-income communities that are home to many minimum wage workers.

The L.A. City Council’s action gives a boost to efforts by employment-rights activists around the country that have faced years-long partisan obstruction at the federal level (and more recently, a less-than-muscular proposal by Democrats to raise the hourly wage to $12  by 2020.) The stasis has fueled efforts to raise the wage in local municipalities. A 2014 policy brief by the National Employment Law Project (NELP) shows 20 successful local minimum wage-raise measures in cities and counties from Santa Fe to Washington D.C. to Seattle.

Owens notes that in 1996 House Speaker John Boehner said he’d rather commit suicide than approve a bill to raise the minimum wage that year. “That’s a rather strong statement,” she says dryly.

Opponents argue the wage raise is a job-killer, although the Wall Street Journal argues that low-wage jobs don’t flee when wage levels are raised, as many factors come into play when entrepreneurs decide where to locate a business.

“It’s just very simplistic and wrong to say a higher minimum wage will drive out jobs,” says Owens. “This issue of whether or not an increase in wages causes job loss has probably been studied more than any economic issue. The weight of evidence shows it doesn’t cause job loss.”

Labor and economic-rights advocates are jubilant about the L.A. victory—but acknowledge it’s just one step in a city where the average monthly rent for an apartment hit $1,471 in 2014. That’s $17, 652 a year — more than half of what the new wages will pay at their peak.

Councilwoman Nury Martinez, one of the measure’s strongest proponents, said as much in a prepared statement: “I know this is a difficult and emotional discussion but I believe we have to be a City that stands up for the working poor. Fifteen dollars is only $31,200 per year by 2020. It’s almost impossible in 2015 to raise a family on so little in a place like Los Angeles.”

“We can say it’s a huge improvement but it doesn’t give anyone a lavish lifestyle,” Flaming says.

Owens calls the L.A. vote “huge” in terms of tackling poverty and income inequality, and lauds the council’s decision, along with efforts by Governor Andrew Cuomo of New York to raise fast-food workers’ minimum wage.

But, she says, “This piecemeal approach is certainly not adequate. Failure to act at the federal level is still leaving millions of workers behind.”