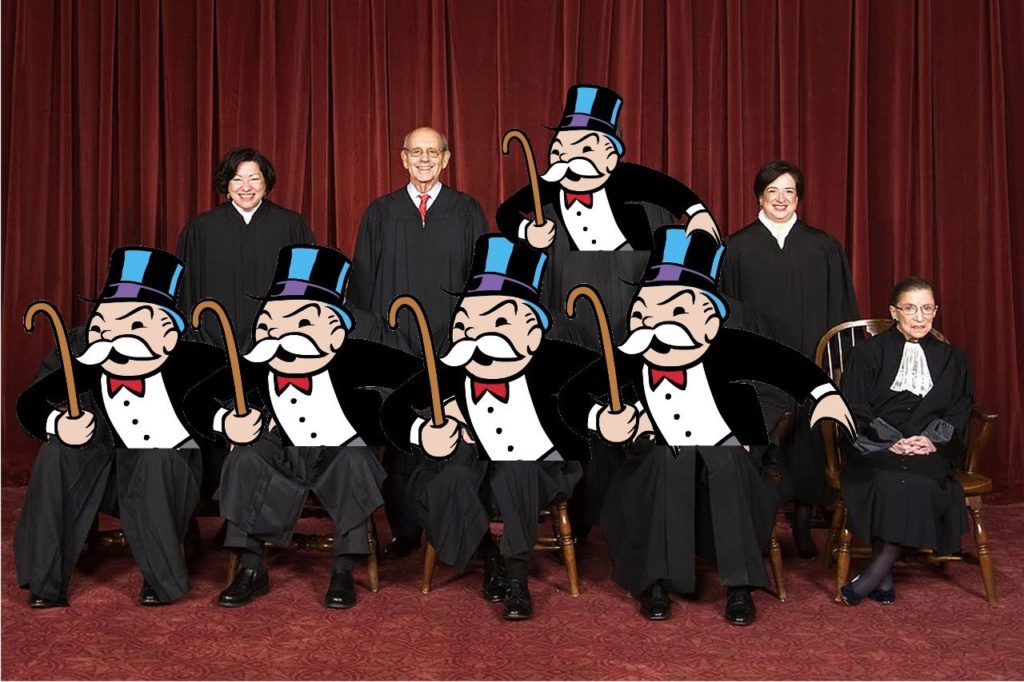 “It’s always darkest before the dawn” sang Pete Seeger. “And that’s what keeps me moving on.”

The recent spate of reactionary decisions by the Roberts Supreme Court — including this week’s outrageous Hobby Lobby ruling — triggers thoughts of a better day, when the right-wingers on the court will have retired or died, replaced by thoughtful liberals who will restore some semblance of fairness and democracy to this great country. Let’s consider what it would be like if our nation’s highest court was actually committed to the notion of “liberty and justice for all.”

Doing so requires making a few leaps of faith, but none of them are far-fetched. It depends on the outcome of the next few election cycles.

If the Democrats retain a majority in the Senate after this November, the feisty, brilliant Ruth Bader Ginsburg, now 81 years old, should retire so Obama can appoint another (younger) liberal member who will have a long tenure on the court. That won’t shift the current 5-4 conservative majority, but it will guarantee that Ginsburg won’t be replaced by conservative.

It would great if one or both of the older conservatives — Antonin Scalia (now 78) or Anthony Kennedy (78 later this month) — would retire, too, so Obama could appoint their successors. But they’ll probably try to hang on until a Republican president enters the White House. Let’s pray (and organize) so that doesn’t happen.

Best-case scenario: A Democrat becomes president in 2016, the Democrats keep control of the Senate, and Scalia and/or Kennedy are so enfeebled by then that they have to quit. At that point, a Democratic president can replace one or both with a liberal justice.

It has become a no-no in American politics for candidates for president or Senate to discuss the characteristics they’d like to see in new Supreme Court justices, except in the vaguest, general terms. They are not supposed to have a “litmus test” for justices. Everyone knows this is bogus. Presidents generally appoint justices who agree with their political views — compromising only enough to get their nominations confirmed by the Senate or to avoid a huge controversy.

Occasionally presidents miscalculate — or, more accurately, their nominees change their views — and upset the ideological applecart. The most famous example is President Dwight Eisenhower’s appointment of California Gov. Earl Warren as Chief Justice in 1953. Eisenhower thought he was appointing a conservative Republican. Warren turned out to be (or became as a result of changing social and political conditions) a liberal and turned the Warren Court into one of the most liberal in history. Another turncoat was David Souter, who turned out to be more liberal – or at least centrist — than George H.W. Bush had anticipated. Among other things, Souter dissented in Bush v Gore, but his side was outvoted 5-4, handing the presidency to GHWB’s son. “Poppy” Bush wouldn’t make that mistake again. His next, and last, Supreme Court appointment was Clarence Thomas.

So don’t expect Hillary Clinton (or any other Democratic candidates for president) to discuss her thoughts about what kind of person she’d appoint to the Supreme Court. She won’t want to get boxed in by any dreaded “litmus test,” which the Republicans would use against her. But if she (or another Democrat ) wins the White House in 2016, and has a Democratic majority, liberals and progressives should push her (and the Senate Dems, especially those on the Judiciary Committee) to make appointments that will dramatically change the court’s direction. Under that scenario, liberals could have a 5-4, perhaps even a 6-3, majority on the court for the next 20, 30, or even 40 years.

What would that mean in terms of public policy? A liberal majority on the Supreme Court could, and should, address the following issues:

Progressives can surely add to this list of issues that a Supreme Court with a liberal majority should address. Unfortunately, presidential candidates won’t directly address these issues or the views of candidates they would appoint to the Supreme Court when vacancies arise. But as we watch the Roberts Court eviscerate our democracy, and protest its outrageous (usually 5-4) rulings, we should also recognize that part of why we want liberal Democrats in the White House and Congress is to make sure that the third branch of government reflects what’s best about country’s values — fairness, equality, civil liberties, and civil rights.

Why Harris v. Quinn Is No Sweeping Victory for Conservatives