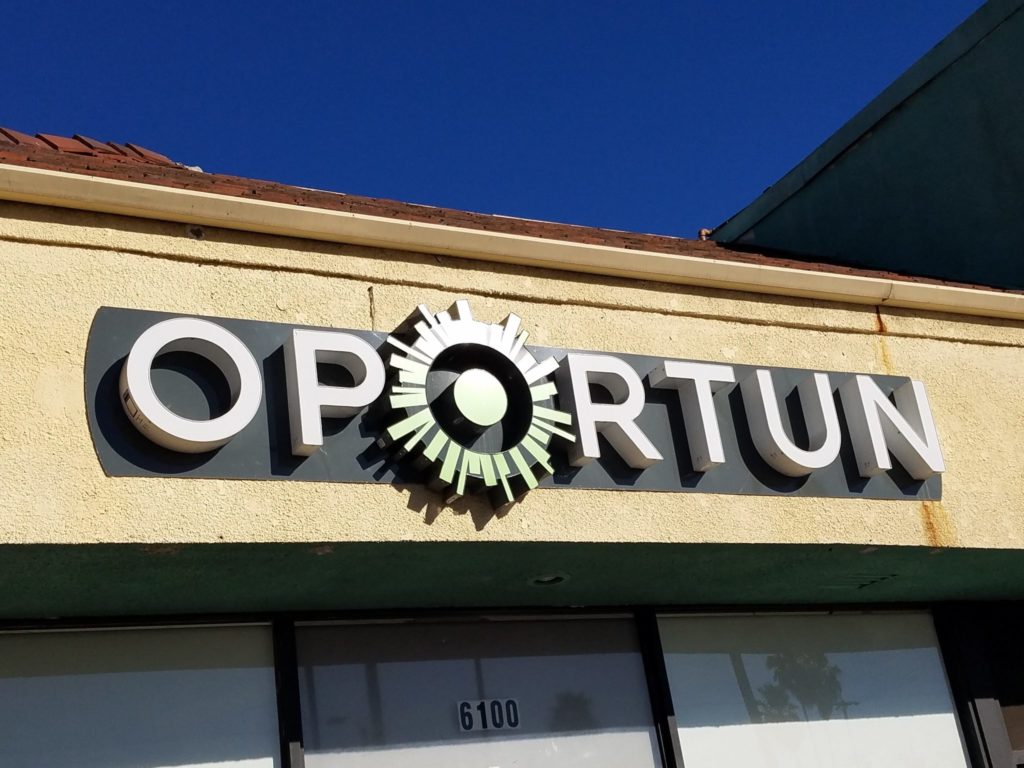 Strict underwriting criteria are part of the reason that Redwood City-based lender Oportun has been hailed by many as a responsible outlier in a subprime market where “payday lenders” dominate. The company, which primarily targets Latino borrowers, declines half of all applicants.

So it was perhaps no surprise to meet one hopeful applicant, Salvador Rivera, outside Oportun’s Altadena storefront office after he had just been turned down for a loan. He had arrived at the office with his cousin and step-daughter in tow. A letter suggesting that he could “build a better financial future with an unsecured personal loan” had led Rivera to try his luck at obtaining a $1,000 loan to put toward a deposit on a first apartment, one he’d share with his girlfriend and her daughter.

Instead, the 22-year-old received a lesson in tough financial love. “They told me I failed,” said Rivera, unsure of his next steps after being promised that another letter would be mailed to him – one explaining why his loan was denied.

“Sometimes the best thing you can do is tell someone that you can’t make a loan now because they don’t have the resources to pay us back,” says Oportun’s chief executive officer, Raul Vazquez, who grew up on the Mexico-Texas border and headed Walmart.com before taking the helm at Oportun in 2012.

Founded in 2005, Oportun has managed to operate profitably while making a dent in a difficult-to-serve market – the 45 million people that the Consumer Financial Protection Bureau identifies as having little-to-no credit history.

The company has made nearly two million installment loans and earned, from the U.S. Treasury Department, a Community Development Financial Institution certification that is reserved for companies that meet the financing needs of underserved communities.

Because Oportun reports to credit bureaus, its customers have the opportunity to build credit histories and access less expensive credit in the future. Credit scores are also used as screening tools by employers and landlords.

A key ingredient in Oportun’s secret sauce is advanced data analytics. The company has developed the ability to score applicants, even if they lack a FICO score — as do half of Oportun’s borrowers.

That scoring system, developed with the help of $260 million in venture capital, contributed to Oportun’s reaching profitability just over two years ago, according to Vazquez. Another key to its profitability has been the company’s ability to reach scale all while adhering to a business model that recalls earlier days of consumer finance.

“While some institutions continue to close physical branches, we have added over 150 locations in the last five years,” wrote Vazquez in an email during his paternity leave. He notes that Oportun has more than 230 locations in six states, some of them stand-alone offices, while others are housed inside Latino-oriented grocery stores. In all, the company has 1,500 employees. 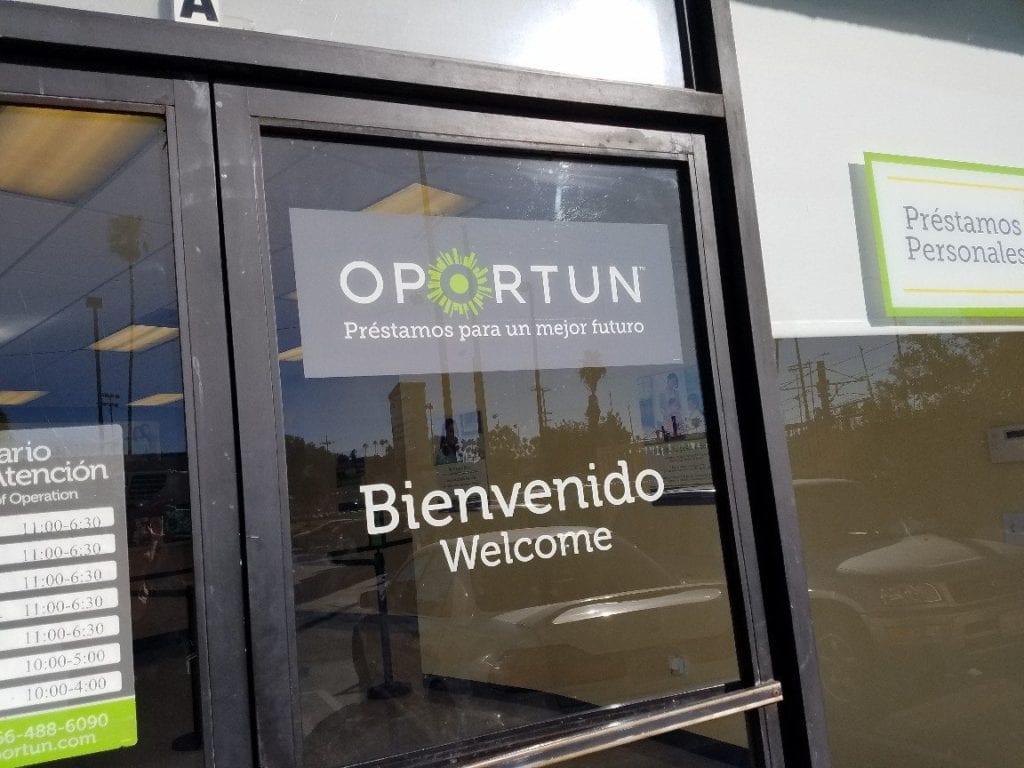 Oportun swims in the same waters as a handful of so-called “Fintech” lenders that are attempting to step into a space left vacant by traditional banks and serve the underserved. They include Elevate, LendingPoint and Ascend. These companies offer credit to customers at subprime rates, use data analysis to score loan applicants, and may promise them lower rates in the future by helping them build credit. Many of them, however, have only an online presence. They are, in some sense, the tech sectors’ response to the increasing income volatility and economic insecurity that have been on the rise since the 1970s.

But unlike some of its competitors, Oportun is also throwback. It resembles the middle and working class-oriented consumer credit firms of the 1950s, like Household Finance Company, says Todd Baker, a senior fellow at the Mossavar-Rahmani Center for Business & Government at Harvard Kennedy School, who published a working paper about the Fintech industry last month.

“What Oportun did is combine the technology for credit analysis with a very high-touch, office-based delivery system to help customers succeed,” says Baker.

Stephanie Gonzalez worked on Oportun’s front lines as a customer service representative handling the holiday rush at an El Super grocery store location in Huntington Park at the end of 2015.

She processed paper work for loans and reviewed contracts with customers whose lack of knowledge about the importance of building and maintaining good credit “really opened [my] eyes,” she said. It concerned her that many of her customers—especially young people and borrowers she thought might be undocumented immigrants—seemed focused on securing a loan but would “not know the importance of maintaining a good credit score.”

What about the loan product itself? Consumers Union’s Suzanne Martindale says she would like Oportun to offer lower rates to borrowers, but understands the company is trying to strike a balance.

“I know that they have tried really hard to thread that needle and to make their loans affordable while, obviously, sustaining their business,” says Martindale.

A sample $1,000 loan listed on Oportun’s marketing literature can be repaid over the course of 13 months in fixed bimonthly payments of $49 for a total cost of $295 at an average percentage rate (APR) of 49.1 percent. That rate is significantly higher than that of a high-cost credit card (which is about 23 percent), but once borrowers repay, they can earn their way toward lower rates on their next loan.

The average interest rate—which, unlike the APR, doesn’t take into account fees—across the Oportun portfolio is 33 percent, according to Vazquez’s recent interview with Lend Academy’s Peter Renton.

Targeting this demographic is “very expensive to do,” according to Nick Bourke, consumer finance director of the Pew Charitable Trusts. “A company has to spend a lot of money finding and acquiring those customers.” Banks have easy access to capital and a built-in customer base but, says Bourke, federal regulations make it difficult to for them to engage in so-called small dollar lending.

Going back decades, banks have not had much of a track record making small loans, says Harvard’s Todd Baker. They typically will invest in the high-risk consumer lending businesses “during the early parts of the credit cycle when losses are low,” but “don’t have the stomach to stick with them” when the going gets tough during the latter part of the cycle, according to the working paper Baker published last month.

Payday lenders, whose storefronts outnumber McDonald’s in the U.S., have filled the gap left by banks with loans that have triple-digit interest rates and are notorious for creating debt traps. When borrowers can’t repay those loans, they must take out another loan and another. Auto title loans, another alternative to traditional banks, put borrowers at risk of losing their means of transport.

It was this state of affairs that led founder James Gutierrez to launch Oportun – first called Progreso Financiero – as a booth inside a San Jose grocery store when he was just out of Stanford Business School. He’d grown up in Southern California’s Inland Empire in a Mexican immigrant family and wanted to find a way to serve a community with “high moral capital” but poor access to financial resources, he says.

He began by administering a lengthy eHarmony-like questionnaire, says Gutierrez, but over time the information requirements have been whittled down. Today a would-be borrower is simply asked to bring in a pay stub or bank statement, her landlord and work supervisor’s contact information, identification and five references.

“You can’t actually build wealth if you don’t have access to capital,” says Gutierrez, who left the company in 2012 and started another, Insikt, which has developed a platform that allows other companies to lend to a similar demographic.

In 2010, Gutierrez worked with California legislators to craft a pilot program, since revised twice, that permits Oportun to impose higher interest rates than what is allowed under current lending law for consumer loans between $300 and $2,500. In exchange, the company committed itself to strict underwriting standards, mandatory reporting of loans to credit report bureaus and a set of other requirements. (Oportun recently failed to expand into Florida by winning similar concessions in that state.)

Oportun’s social mission has not prevented it from facing some legal difficulties. In March, a borrower from Montebello seeking class-action status accused the company of violating California’s debt collection law. The borrower’s lawsuit alleged that the company’s debt collection letter threatening legal action listed an amount several thousand dollars in excess of the $2,500 than it intended to–and is permitted to–sue for in small claims court. The litigation could increase regulatory scrutiny of the company’s compliance with consumer protection laws, according to a report by the Kroll Bond Rating Agency published in May.

Oportun declined to comment on the litigation. “We always strive to ensure that our collections efforts are compliant with all the applicable laws, rules, and regulations and that they are also aligned with our overall mission,” Marivi Lerdo de Tejada, a company spokesperson, wrote in an email. Lerdo de Tejada added that the company will always try to work with a borrower before taking legal action.

California consumer advocates offer qualified support for the work Oportun has done under the pilot program and they have joined together with the company on some legislative efforts, as well.

“Oportun isn’t perfect. The pilot isn’t perfect,” says Liana Molina, director of community engagement at the California Reinvestment Coalition. “I think they’re really trying to be the good guys, and we have a friendly relationship.”

But loans are not always the answer for communities struggling financially, she adds. Good public policies that guarantee living wages, access to health care and to safety net services are key.

“It’s easy to say, ‘Oh, go get a loan,’ and solve your problem today, but then you’ve just created another problem that’s going to last for who knows how long — months, years?”

Oportun seems to have found the customers who can, for the most part, avoid those debt traps. Its loss rate has remained in the single digits, according to Vazquez.

Arturo Banuelos is one customer that Oportun is willing to bet on. He lost his job as a waiter at a country club after injuring himself playing soccer. He took out a $3,000 loan to tide him over until he found a new job.

Interviewed as he made his way to his car after visiting Oportun’s Altadena office, he appeared pleased that he been able to reduce his $89 biweekly payments to make them more manageable. He acknowledged the interest rate was high, but, he said, “they helped me a lot.”

He still had a noticeable limp from his injury but seemed optimistic about his future. He had found work as a plumber’s assistant.