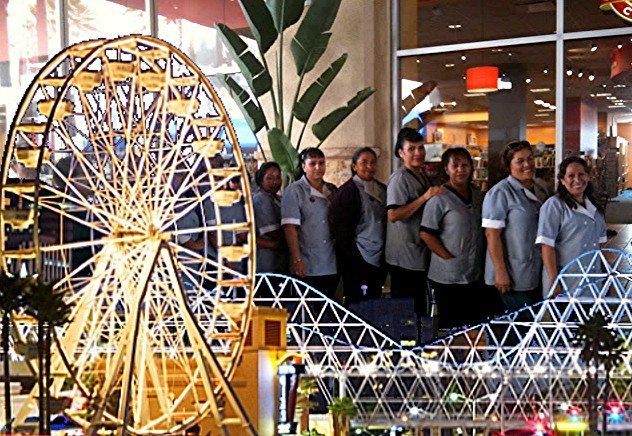 (Editor’s Note: Tomorrow is the deadline to collect signatures for the Long Beach hotel workers living-wage ballot initiative. In this post, activist Christine Petit shares her perspective on this historic effort. Her feature first appeared on the California Work & Family Coalition Web site.)

In 2008, I chose to make Long Beach, California, my home. I love Long Beach because it’s a diverse city and there are always interesting events and festivals going on. Many people are attracted to Long Beach for these reasons, if only for a weekend. In fact, Long Beach has made great strides to attract tourists, investing approximately $750 million into revamping downtown toward these ends over the last three decades.

Meanwhile, the hotel workers who take care of Long Beach’s tourists are struggling to provide for their families. The median annual income for full-time hotel and food-service workers in Long Beach was $23,538 in 2009, compared to $41,036 for all of the city’s full-time workers.

Interviews of workers at one prominent Long Beach hotel found the median yearly earnings of the workers to be $19,240. Forty-one percent of surveyed workers utilized some form of public assistance in order to meet their basic needs, with the average worker eligible for an estimated $2,375 in public assistance per year.

Yet, even in these tough economic times, Long Beach hotels are doing well and Long Beach continues to be a strong market in the hotel industry. The low wages hotels pay their workers are particularly outrageous in light of the fact that Long Beach hotels have not only benefited from the city’s significant investment in tourism, but received roughly $114 million in direct subsidies.

In this context of profitable hotels burdening their workforce as well as other tax payers, community members decided to initiate efforts to get a measure on this November’s ballot that would guarantee workers at Long Beach hotels with 100 rooms or more three things: 1. a living wage, 2. five paid sick days annually, and 3. tip protection (most patrons are unaware that hotel “service charges” are often not paid to the workers).

We’re proposing a living wage of $13 an hour, which is roughly $2,000 a month for a full-time worker. In Long Beach, that will cover rent, utilities, gas money, and groceries. Right now many workers make far below that and come up short in meeting the basic needs of their families each month.

Long Beach resident Maria Patlan said, “I’ve worked at the Hilton Long Beach for over a decade but still have to use food stamps and get reduced-price school meals in order to feed my children. I can’t afford full medical coverage for my family. I work hard. I should be able to support my family.”

Hotels with living-wage provisions in place have higher overall worker satisfaction, greater worker productivity, and less turnover than non-living-wage hotels. A study of Los Angeles’ hotel industry found that while the hotel-employment rate for the city as a whole has gone down in recent years, it is up on Century Blvd.—an area of the city with a living-wage provision in effect—an indicator that those hotels are doing well.

For all of these reasons, I volunteer each week to gather signatures for this initiative. Going door-to-door to talk to registered voters, I’ve found that most people agree: a living wage for hotel workers is reasonable.

The ACORN of the Restaurant Industry