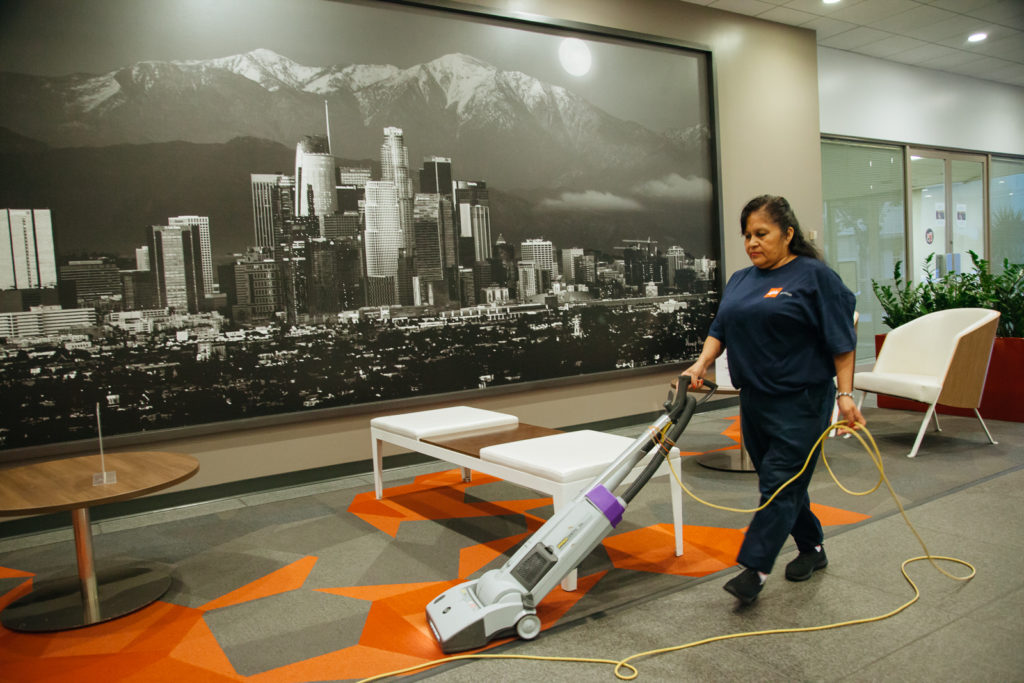 “Janitors can tell you down to the tenant – to the desk – who doesn’t care and just throws everything in the trash or contaminates the recycle bin.”

Janitors, who are often the unseen eyes and ears of the commercial office buildings they clean, are on the front lines of an innovative effort to turn their workplaces green.

Aida Cardenas, director of the Building Skills Partnership, a labor-management funded initiative, launched the Green Janitor Education Program in 2014 at a time when building owners were increasingly seeking Leadership in Energy and Environmental Design (LEED) certification for their properties. The widely-used LEED rating system lets owners put a green stamp of approval that indicates a building’s level of conformity to green operation and maintenance standards. “Janitors weren’t really part of that conversation,” even though the kinds of chemicals and equipment they used were important in determining whether a building received a certification, Cardenas said.

The program began in Los Angeles with a pilot of about 120 workers in seven buildings as a collaboration between the Service Employees International Union-United Service Workers West, the Building Owners and Management Association (BOMA) of Greater Los Angeles, the U.S. Green Building Council (which developed the LEED system) and the Building Skills Partnership. (Disclosure: Several SEIU locals are financial supporters of this website.) Since then, more than 1,000 janitors have graduated from the program and are working in 65 buildings across the state.

Casilda De Jesus now unplugs her TV, radio and other appliances when she’s not using them, knowing that as, “energy vampires,” they are still draining power.

Janitors participate in 30 hours of classroom training, which takes place during their shifts over a 15-week period. One focus of the training is the purpose of environmental sustainability efforts, which can sometimes make work harder for janitors who must contend with “thinner trash bags that rip” and cleaning chemicals that they may not view as effective, said Cardenas.

The program—the only one like it for janitors in the country—has helped align the janitorial staff with a building owner’s sustainability goals. For example, some janitors had resisted using green chemicals that did not tackle dirt as quickly as other products.

Casilda De Jesus, who graduated from the program in August, recalled co-workers sneaking Ajax to the worksite until they were discovered by supervisors. “Having a better understanding of green concepts” helps janitors buy into green practices, De Jesus said through an interpreter. The use of cleaning products that have a recognized environmental seal helps buildings receive points toward their LEED certification. De Jesus claims the switch to green cleaning detergents, made several years ago by her building, has alleviated her asthma symptoms.

Buildings that participated in the Green Janitors program used 5.6 percent less energy on average in 2016 than buildings that did not, one study found.

The janitors are “turning off the lights that people leave on,” according to Cardenas. “They’re sorting through bins to divert as much waste as they can. They’re reporting leaks and [they] understand the urgency because they’re conserving water.”

The training has contributed to energy savings, said a pro-bono study conducted by seedLA, an environmental consulting group. Buildings that participated in the Green Janitors program used 5.6 percent less energy on average in 2016 than buildings that did not, the study found. The authors attribute those savings to green building maintenance practices, as well as to physical changes to the building due to energy efficiency upgrades.

“Building a low carbon economy takes workers and an awful lot of those workers are blue collar workers. They are not just engineers and highly technical professionals,” points out Carol Zabin, director of the Green Economy Program, at the University of California, Berkeley Center for Labor Research and Education.

The Building Skills Partnership’s programs—which also include English as a Second Language and digital literacy classes – are paid for by a fund created through collective bargaining between the janitors’ union and janitorial firms that contract with building owners. Last year, the Green Janitors program received a $520,000 grant from a state training fund, administered by the California Workforce Development Board, intended for sectors of the economy that must undergo transformation to combat global warming.

De Jesus and other janitors have brought what they learned home about composting, energy and water conservation. De Jesus now unplugs her TV, radio and other appliances when she’s not using them, recognizing that as, “energy vampires,” they are still draining power. She urges her neighbors to report water leaks to their apartment manager.

De Jesus would like to see her office building’s tenants benefit from the kind of training the janitors received. “I think it’s really important that the tenants in the building go through this program, so that they are sharing the same practices,” De Jesus said.

“Janitors can tell you down to the tenant – to the desk – who doesn’t care and just throws everything in the trash or contaminates the recycle bin,” noted Cardenas.

Building managers do not typically authorize janitors to talk to office tenants about profligate energy use or subpar recycling habits. But last Earth Day, the Building Skills Partnership released a video – introduced by Mayor Eric Garcetti — that educated property managers and janitorial companies about the program. It includes janitors delivering gentle reminders about how to be better environmental stewards by using public transportation, bicycling and recycling.

Rising Realty Partners owns and manages the Garland Center, the West Seventh Street building where De Jesus works, as well as several other downtown L.A. buildings whose janitorial staff are participating in the Green Janitors program. The company opted into the program so as to invest in the staff that maintains its buildings while also contributing to “building wellness,” said Kayce Hawk, senior vice president of property services for the company. The janitors have only recently graduated from the program, but the reports from the building staff have all been positive, she added. “It’s empowering for them to get free continuing education that benefits them in their job and in their home life.”