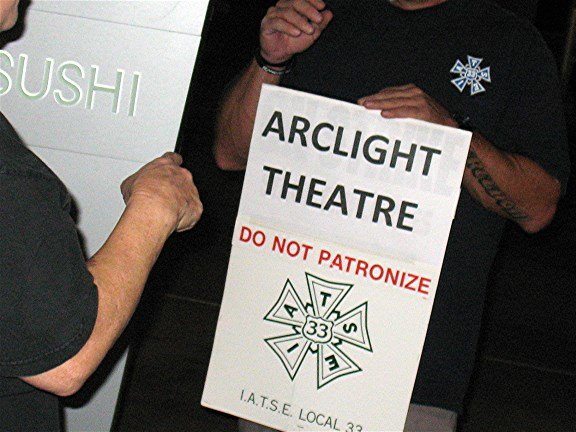 “What do we want? Living wages! When do we want them? Now!”

Last Saturday evening the movie-and-sushi crowd that regularly assembles in the Sunset Boulevard ArcLight Cinema’s courtyard witnessed a spirited protest organized by the International Alliance of Theatrical Stage Employees Union (IATSE) Local 33, on behalf of the projectionists employed by Tinseltown’s priciest movie venue. It was the latest in a series of union actions against ArcLight aimed at drawing public attention to the theater projectionists’ meager wages — under $13 an hour and without health care or pension benefits — nearly half of IATSE’s pay and benefits compensation.

The timing couldn’t have been more annoyingly inopportune for ArcLight. The evening marked the grand opening of the Lionsgate picture Interstellar and, as it turns out, Lionsgate is now busy outsourcing, to overseas, jobs previously held by union musicians. “We love these premieres and openings, because it’s money not shared with the studios,” union attorney Bob Cantore told Capital & Main. “It hits the theaters in the pocket books.”

Somebody from either mall security or theater management panicked and called the Los Angeles Police Department, whose officers, upon arrival, were given a cordial presentation by Cantore on the verities of First Amendment rights and city ordinances. A flyer distributed among the crowd read:

Coming to see Interstellar? It is much better in 70mm!!! Did you know how much skill and training it takes to operate a 70mm projector? Did you know that the average skilled film projectionist in L.A. makes over $25 an hour with good benefits? BUT NOT HERE AT THE HOLLYWOOD ARCLIGHT!!

The action had begun just before dark, as union activists handed out flyers and picket signs, while they prepared a small platform at one end of the mall. By 6 p.m. the pickets were up and walking the mall—men, women and even some young family members. The crowd had started to noticeably expand and the bullhorn was in full operation. One person walking the picket line was María Elena Durazo, the Los Angeles County Federation of Labor’s executive secretary-treasurer.

More than a few stopped to discuss the specifics of the strike with picketers. One person walking the line was Roger Adams, who says he started as a projectionist in 1973 making a little over $6 an hour.

“I’m over at the stagehands union now because we merged [with Local 33 two years ago], but there’s just no work for projectionists. I’m here to support my union brothers and sisters.”

About an hour in, things turned surprisingly festive, and the crowd came alive when speakers mounted on the platform erupted with Tom Petty and the Heartbreakers’ “I Won’t Back Down” and Bob Marley’s “Get Up, Stand up.” Shortly afterwards, the protest concluded with speeches by International Vice President Mike Miller and California State Assembly Speaker Emeritus John A. Pèrez.

But it was Durazo who provided a dramatic cap to the evening when she produced a large popcorn container and asked the crowd, “How much does this cost?” After a few moments she said, “Think about it. Two tubs of popcorn are worth more than what they pay the projectionists in the Arclight Theater.” She then spoke about a man she knew of who worked in theaters 30 years ago and who was making just about the same amount of money then as the projectionists do now.

After the speeches, the crowd began to disperse, while Cantore gave the LAPD Sergeant who had been called to the scene the same polite presentation he had given to the four officers earlier. He told her that the platform had been taken down and that the demonstrators would now decamp to the front of the theater. He also said that they would be back.