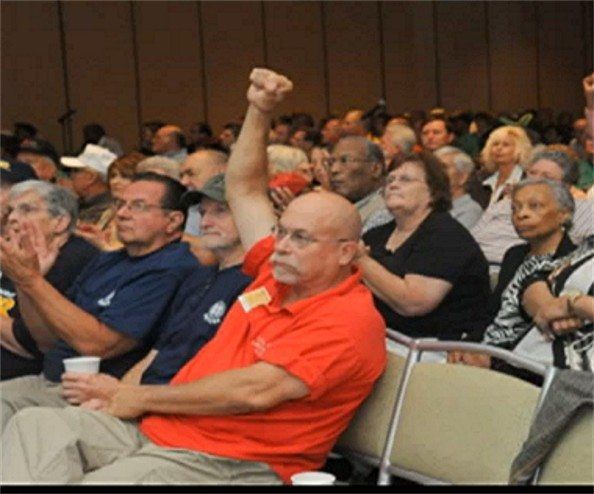 Social Security, Medicare and Medicaid are under attack by Republican lawmakers. Whether it is the Romney/Ryan budget that would end Medicare as we know it or proposals to privatize and cut Social Security, members of the Alliance for Retired Americans are pushing back and mobilizing with new “Let’s Not Be the Last Generation to Retire” campaign.

During the next few weeks to coincide with Medicare’s and Medicaid’s 47th anniversary July 30 and Social Security’s 77th on Aug. 14, Alliance members will sponsor educational briefings at senior centers and organize protests outside offices of lawmakers who have voted against the needs of local retirees. Says Alliance President Barbara Easterling:

Our goal is to educate seniors on the issues and on where elected officials and candidates stand. We need to clear up all the misinformation that is being spread by the big business groups and the right-wing commentators on TV.

She says seniors are worried that “if the wrong votes are cast on Capitol Hill, or if the wrong candidates win November”’ these programs won’t be there for their children and grandchildren. Easterling:

They worry that folks our age may be the last generation to retire.

For more information on the Let’s Not Be the Last Generation to Retire, click here. To find an action near you, click here.

You also can sign a petition here urging lawmakers to strengthen, not cut, Social Security and to protect Medicare and Medicaid.

Mike Hall is a former West Virginia newspaper reporter, staff writer for the United Mine Workers Journal and managing editor of the Seafarers Log. His blog first appeared on Labor’s Edge and is reposted with permission.

WebHot: You Too Can Be an Offshore Tax Shirker

Seattle Strike: Garbage In, No Garbage Out