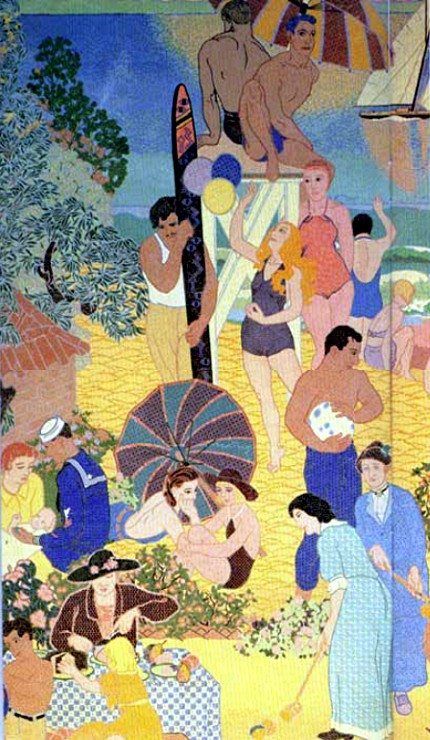 After growing up in L.A., I got used to hearing my hometown disparaged as superficial, anti-intellectual, not a “real” city, celebrity obsessed, etc. etc. It was shocking to me that Los Angeles could be so easily dismissed by people who hadn’t even visited here and seen how great a place it really is. Even deep thinkers from Northern California looked (and still look) down on our town from the ivory towers of San Francisco and Berkeley,  as if Southern California doesn’t represent the majority of the people in our state and most of its social and political energy.

And we Angelenos, rather than defend our town, have often accepted the judgment of others – that L.A. isn’t a serious place, doesn’t produce important scholarship, and is well behind the intelligence curve.

Well, if you need a boost to your hometown ego, spend some time at the Hammer Museum’s new show Made in L.A., that features the works of 60 young and/or previously unappreciated artists working in our city.  (See image above.) One visit was clearly not enough as I took in only a fraction  of what’s available, but what I did see was thoughtful, surprising and unique.

The exhibit is taking place at two other venues besides the Hammer — the Municipal Art Gallery at Barnsdall Art Park and the Culver City Art District — until September 2. Billboards produced as part of the show can be seen on La Cienega Boulevard (between Venice and Washington), Hollywood Boulevard (at the entrance to Barnsdall Park) and Sunset Boulevard (at Olive Drive in West Hollywood).

As evidenced by the success of the citywide Pacific Standard Time exhibits of the past year, it’s clear that the attention and energy devoted to the art produced in L.A. is only part of the way our city is beginning to demand respect. There’s also the demographic diversity of L.A. that presages the future of our nation and the entire planet, the most dynamic and active labor movement in the country, a largely progressive and forward-thinking city government, two preeminent universities and several high-quality colleges, several world-class medical institutions, an exciting music and theater scene, ever expanding multi-national dining opportunities, and– it’s cruel to point out right now as the east and the Midwest sizzle — the best weather in the country.

So let’s resolve to end our traditional inferiority complex and open our eyes to the amazing city in which we live. With our self-esteem growing stronger, who knows? We might even vote to protect what we love about our city and our state by supporting the Governor’s modest tax increase this November.

A Parade Passed By: Rethinking Our Democracy