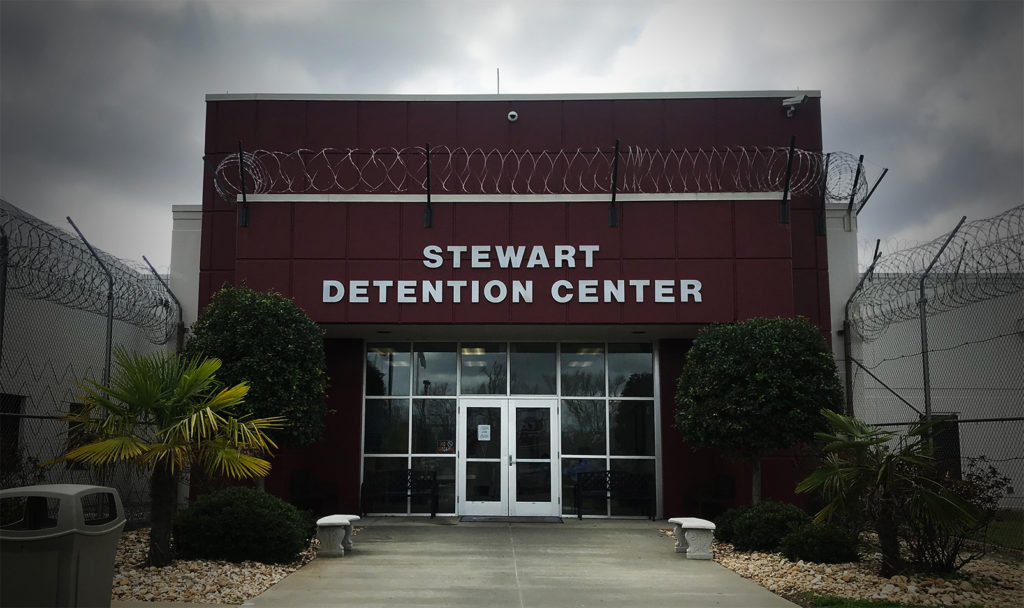 CoreCivic, a for-profit prison company with annual revenues of nearly $1.8 billion in 2017, has further enriched itself by forcing immigrant detainees in Georgia’s Stewart Detention Center to work for as little as $1 a day under threat of criminal prosecution, solitary confinement or transfer to substandard living quarters. That’s according to three men – all current or former detainees — who have filed a federal lawsuit against the company, alleging they have worked at the detention center under such threats.

Some 1,700 men are held at Stewart as they await deportation, or fight for asylum or relief from deportation.

One detainee alleges a guard denied his request for toilet paper, saying the detainee could use his hands instead.

Plaintiffs’ attorneys say CoreCivic is engaged in a “deprivation scheme” aimed at forcing detainees to mop floors, scrub toilets, do laundry, cook and essentially keep the detention center running at a fraction of the cost of hiring local workers.

“CoreCivic deprives detained immigrants of basic necessities like food, toothpaste, toilet paper and soap — and contact with loved ones — so that they have to work in order to purchase those items at CoreCivic’s store (the Stewart commissary),” the complaint claims.

The alleged forced labor also denies Stewart County residents, who are among the state’s poorest, employment opportunities they could have if it weren’t for a ready supply of nearly free detainee labor, the plaintiffs’ attorneys allege.

Immigration and Customs Enforcement rules specify that work is to be voluntary and compensated at the rate of $1 per day. The regulations also state that detainees must be provided with hygiene supplies like toothpaste and soap.

ICE spokesman Bryan Cox wrote in an email that the agency doesn’t comment on pending litigation. However, he noted that “U.S. Immigration and Customs Enforcement is firmly committed to the safety and welfare of all those in its custody.” Cox wrote that Stewart is subject to announced and unannounced inspections and has repeatedly been found to be in compliance with the agency’s standards.

However, a report released last December by the Department of Homeland Security Inspector General noted that Stewart detainees reported that they weren’t given such items promptly or that they weren’t replaced after they’d been used up.

Wilhen Hill Barrientos, a 23-year-old asylum seeker from Guatemala, who is a plaintiff in the lawsuit, alleged that a Stewart guard once denied his request for toilet paper, saying Hill Barrientos could use his hands instead. The lawsuit notes that Hill Barrientos now uses his earnings to purchase such basic supplies from the detention center commissary.

Last February, Hill Barrientos, who works in the Stewart kitchen, told Capital & Main that he suffered a burn on the job, but wasn’t allowed to leave his post to seek medical help. He also claimed that forced work played a part in 33-year-old detainee Yulio Castro Garrido’s death of pneumonia last December. Castro, also a Stewart kitchen worker, became sick and weak, but wasn’t allowed to skip work to see a doctor, Hill Barrientos said.

Hill Barrientos alleged in his lawsuit that he’d been put in medical segregation for two months last year in retaliation for filing a grievance against a guard who forced him to work while he was ill. Another plaintiff, Shoaib Ahmed, an asylum seeker from Bangladesh, said he was punished with isolation for 10 days for threatening a work action.

A CoreCivic spokesman didn’t comment on the lawsuit in time for this story.

Core Civic segregation (solitary confinement) rosters obtained by Capital & Main show that seven detainees were placed in solitary at Stewart for similar protests, between June and October 2017. A Haitian man endured 26 days in solitary for encouraging others to participate in a work action. Six other detainees were punished for “inciting a group demonstration,” including three men who each spent nearly a month in isolation on that charge.

The plaintiffs seek class action status, and demand an end to the alleged forced labor regime, and disgorgement of CoreCivic profits that resulted from it, along with compensation and damages for detainee workers.

Attorneys from the Southern Poverty Law Center and Project South represent the plaintiffs, as do several attorneys who have made similar claims in cases on behalf of detainees in Colorado in 2014, and San Diego and Adelanto, California last year.

The Colorado case—against another private prison company, the Geo Group, was granted class action status this year, and a settlement conference is scheduled for May, while the California cases—against CoreCivic in San Diego and Geo in Adelanto — are in early stages of litigation. Washington state Attorney General Bob Ferguson also filed suit on behalf of detainees at the Geo Group’s Northwest Detention Center in Tacoma last year, alleging unjust enrichment and violation of the state’s minimum wage law.

“I hope the fact that so many of these cases are pending will lead to momentum that will result in the end of forced-labor practices at detention centers nationwide,” said plaintiffs’ attorney Meredith Stewart, of the Southern Poverty Law Center.