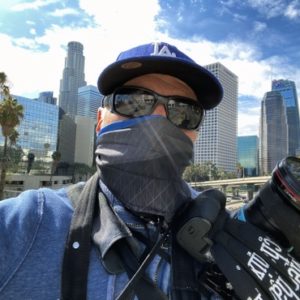 On Thursday evening, hundreds of peaceful protesters marched down Sunset Blvd. in Echo Park to Los Angeles City Councilman Mitch O’Farrell’s district office. The march was aimed at showing community solidarity for the unhoused living at Echo Park Lake. The city began clearing the homeless out of the park earlier this week in order to close the park for “renovations.”

Some protesters splintered off and marched to Echo Park Lake where they were met by Los Angeles Police Dept. officers. The police declared the protest an unlawful assembly and ordered people to disperse. As tensions escalated, officers fired rubber bullets at the crowd. A photojournalist from the Los Angeles Times was hit in the leg.

Several photojournalists and reporters were corralled, then arrested and detained for violating the dispersal order. Many protesters were also arrested and driven away in LAPD buses to be processed and cited. The clashes between protesters and LAPD continued  late into the night.

As I left the scene, a voice over an LAPD helicopter loudspeaker ordered the remaining people to leave the area.

Protesters on Sunset Blvd. on Thursday evening to protest the removal of the homeless encampment at Echo Park Lake.

LAPD officers square off with protesters on Lemoyne Street.

LAPD officers square off with protesters in Echo Park.

Protesters gather behind a barricade of dumpsters on Lemoyne Street in Echo Park.

Protesters face the LAPD on Sunset Blvd. in Echo Park.

LAPD officers and protesters clash in Echo Park. Several people were detained and arrested during the protest.

A protester raises his arms to police in Echo Park.

All Photographs by Ted Soqui