The Board of the Los Angeles Department of Water and Power took a huge step towards a greener, more efficient Los Angeles last Thursday. With a unanimous vote, the Board more than doubled LADWP’s investment in energy efficiency programs while also committing to sustaining that investment over the long term.

The Board set a goal of reducing energy consumption “at least 10%” with a soft target of 15% by 2020, pending the results of a new energy efficiency potential study.  “These are significant increases and set LADWP on the path to be a leader in energy efficiency, allowing its customers to take advantage of this clean and cheap source of power,” NRDC’s Kristin Eberhard blogged the next day.  “A robust energy efficiency budget can help create jobs and displace dirty coal in LADWP’s portfolio.”  The vote came after over a year-and-a-half of organizing by a diverse coalition of environmentalists, community organizations, small businesses and IBEW Local 18.

Broad Coalition Stands Up for Energy Efficiency and Jobs

The breadth of the RePower LA coalition that packed the board room made it clear just how many types of people would benefit from energy efficiency programs: small businesses, low-income families, apartment owners, tenants, youth, the unemployed, and of course everyone who breathes or values the environment in Los Angeles and beyond. 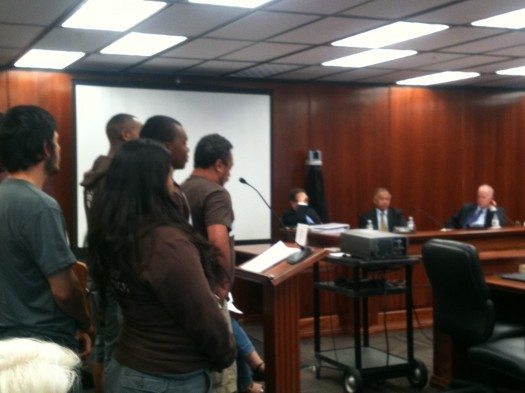 Abraham Hernandez, a South LA resident and member of AGENDA/SCOPE, spoke about the difference energy efficiency programs could mean to people like him. “I’ve been unemployed for almost two years,” he explained, “and I represent thousands of others who are unemployed and want to work. I’m on the waiting list for IBEW Local 18’s Utility Pre-Craft Trainee program [which would be expanded under this budget]. This would be a great opportunity and put me on the path to a middle-class career.” Hernandez shared that he had first been attracted to this type of work as a boy, when he would help his father work on electrical and plumbing projects.

South LA apartment owner Diop Bankole attended the meeting to show support, as did Joe Donlin of SAJE, a group that as part of its work organizes tenants in the USC area. Business owners Chuka Obijiaku and Xochitl Oliveras came to advocate for the plan, which would help small businesses like theirs upgrade old buildings. Obijiaku, who owns a clothing store and tax preparation service on Crenshaw, said, “I don’t know where we’ll end up if we’re not able to lower our bills in some way.” Oliveras runs Birrieria Rosa Maria, a Pacoima restaurant that has been in her family 27 years. “We pay more than $10,000 a year for utilities. I struggle to pay my employees on time,” she explained. 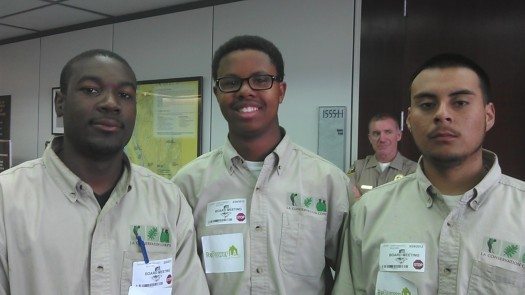 Organizations that engage youth in environmental work, including Urban Semillas (pictured above) and the LA Conservation Corps (at right), spoke out on the benefits of programs combining energy efficiency and career path training. “We need to give struggling youth in the inner city a chance to improve our lives,” said Jakarr Lewis, a young man with the LA Conservation Corps. “We’re the people who don’t usually find out about opportunities. It’s critical to have programs that build skills, take the time to train young workers properly, and give guidance.”

LADWP General Manager Ron Nichols first hinted at the Department’s new direction at a RePower LA town hall in early May, and the proposal that Nichols and LADWP staff put forward reflected many of the recommendations advanced by the coalition. The budget for energy efficiency programs would increase from $55 million to $128 million in the Department’s final budget.

LADWP staff and Board members repeatedly mentioned the creation of good jobs along with energy efficiency services for a broad range of customers as key priorities. The new plan would expand programs for small businesses that could not otherwise afford energy efficiency upgrades and extend funding for programs targeted to low income customers, programs which can make use of IBEW Local 18 trainees, while also helping larger commercial and industrial customers become more energy efficient.

As the budget faces the next round of review at LA City Council, the coalition pledged to continue to make sure that this investment translates into a plan to create good jobs, substantial energy savings and quality programs that benefit all of Los Angeles. “There is still work to be done.  But the dramatic shift at LADWP reflected in Thursday’s vote was a major accomplishment,” said Jessica Goodheart, director of the RePower LA project at LAANE.