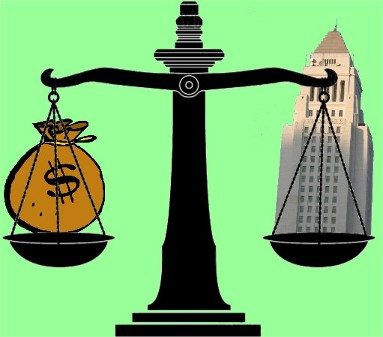 I’m not in the habit of critiquing economic analytical methods in obscure reports—really, I’m not—but there’s something about this one that grates. City Hall’s bending over backward to pander (or at least, they were) to the Occupy L.A. people outside its door, and at the same time considering a tax break that will potentially further devastate the city budget.

The report in question is an analysis by USC Accounting Professor Charles Swenson, and the tax break is the proposed elimination of the city’s business tax. Swenson argues that if the city does so, forgoing $424 million in revenues, it will actually generate 131,000 jobs and generate an additional $263 million above and beyond what the business tax now brings in.

How this happens—other than voodoo – is entirely unclear from the report. Swenson simply presents a series of tables with a series of assertions, without showing a formula or basis for any of them. This is not the first time Swenson’s been criticized for such practices and, as in that instance, Swenson did not respond to my email request that he share his math magic.

Earlier in the report, however, we can see the problem with his underlying logic. Swenson looks at two previous reforms of the business tax (there’ve been five in 10 years, the most recent occurring just last year), and makes the case that one of them created 20,000 direct and indirect jobs.

The first reform was back in 2001. This so-called “tax holiday” exempted new businesses for the first two years of their existence, if they had under $500,000 in revenue. In the previous year, all companies with under $500,000 in revenue paid an average of $302 in taxes each year. Since the holiday only impacted start-ups, generally on the lower end in revenue, the savings for the average new company was probably less, but $302 represents the ceiling of potential savings. If this program created jobs in the way Swenson claims, it suggests that all many businesses needed to hire someone was to save $300 in taxes for two years; apparently they already had the $30-60,000 a year it might take to pay wages, benefits, and other costs, and were just a little short. .

A second problem with the logic should be evident—last year, the city widened this “tax holiday” to cover all businesses, regardless of size, for three years. So whatever benefits there might be, we’ve already got them, at a much lower cost. Why then do we need to eliminate the entire tax?

The city’s cut thousands of workers in the past few years and is fighting for each dollar to avoid cutting more, and somehow still keep the lights on. Can they really be considering eliminating 10 percent of the general revenue in the hopes that the unknown formulas of Mr. Swenson are right? One hopes not (and FYI, the L.A. Times agrees, sort of), but it certainly would give the folks at Occupy something to really be pissed off about.

Jobs Search: From the Streets to Congress — and Back